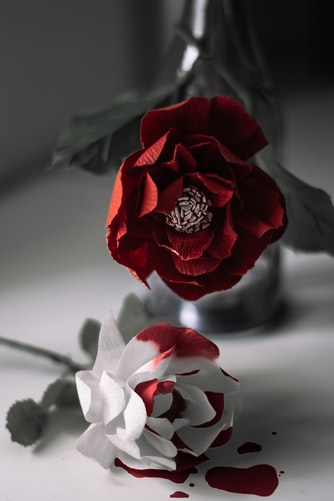 [Note from Frolic: We’re so excited to welcome author Alyssa Day to the site today! She’s talking all things vampires. Take it away, Alyssa!]

It’s October—the spooky season! The time to re-watch favorite horror films and think about all the wonderful creatures who go bump in the night. One of my favorites, of course, is the vampire. The stuff of legend and terrifying bedtime stories for centuries, this bad boy (and bad girl!) of the paranormal has been immortalized in literature and films in so many different guises. From Dracula to Lestat, from True Blood to The Vampire Diaries, the vampire has given us characters to fill our dreams . . . and our nightmares.

Here are the top 10 reasons we can never get enough vampires:

Who didn’t have at least a daydream or two about Brad Pitt in Interview with the Vampire?

2. Everyone wants a chance at forever with the person they love.

Can you imagine spending eternity with badass Selene from Underworld?

3. Ordinary rules don’t apply to vampires—they own the night.

And sometimes they can fly! In my book Bane’s Choice, Dr. Ryan St. Cloud gets the surprise of her life when Bane takes her into his arms . . . and soars up into the moonlit sky!

4. If you’re in the five and under crowd, you love them because they can count!

So many of us grew up counting along with Sesame Street.

5. Sometimes they’re the embodiment of a teenage dream.

Are you Team Angel or Team Spike?

6. They’re an intriguing mix of danger and courtly manners—at least the ones who’ve been around for awhile.

7. They’ll never, ever steal your chocolate!

And never come home and ask “What’s for dinner?” (but beware: dinner might be you!)

8. Did we mention they’re sexy?

Whether it’s Damon in The Vampire Diaries or Eric in True Blood, they’re perfectly designed to make our hearts beat faster.

You’d never need to worry about getting the lid off a jar or moving your refrigerator with a vampire around.

10. And, most of all, they’re the badass characters we love to fear.

The increased heartbeat and rapid breathing of fear has a lot in common with the physiological response to arousal—both push us out of the mundane routine of ordinary life. It’s why we ride rollercoasters and watch scary movies. We love that edge of danger . . . especially when we know that our happily-ever-after is just around the corner.

So snuggle up with a blanket and a book. Make some hot, buttered popcorn and queue up a movie. Escape into the fantasy of falling in love with a vampire!

Ryan’s lovely, full mouth fell open just a little. “You have a housekeeper? Is she a vampire, too?”

“Does she know about you? Is she enthralled? Is she, like, your Renfield? Do you—”

“Enough,” Bane protested, wanting very much to pound his head against the wall. “There are no Renfields. Bram Stoker has much to answer for, and I plan to tell him that the next time I see him,” he said grimly.

“Well, I…what? The next time you see him? Bram Stoker is alive after all these… Oh. My. God. Bram Stoker is a vampire?” Her voice rose so high it was nearly squeaking by the end of her question.

“How do you think he got so much right?”

She rolled her eyes. “How would I know what he got right, since I thought Dracula was fiction until about an hour ago?”

Bane’s breath caught in his throat. “You rolled your eyes at me.”

“And I probably will again, when you say something stupid.” She blinked then and bit her lip. “Yeah, okay, probably not brilliant to call a vampire stupid. You’re not going to kill me, are you?”

His gut tightened at the thought that he probably would have to kill her. She was immune to enthrallment, and there was no other way to be sure she’d never give away their secret. But…later.

He could always kill her later.

“We can discuss that at another time, Doctor,” he muttered. “I’ll answer all your questions. After you have a shower and dress. I believe you’d feel much more at ease if you were not so…lacking in clothing.”

And why did he care if she felt at ease? His entire existence had been about making people feel uneasy. Also, he quite enjoyed seeing her lack of clothing.

This woman was turning his life upside down, and he didn’t like it.

He liked it quite a lot.

She glanced down at herself and blushed, and then a little of her bravado seemed to drain out with the color ebbing from her cheeks. Bane suddenly, viciously, wanted to punch himself in the face for stealing her courage. He might have to kill her, but he didn’t have to humiliate her.

“Just come have a shower, in my very clean and uncluttered bathroom, and then I’ll answer any questions you have.”

And then Bane, the most feared vampire on the entire East Coast, held his breath and found himself hoping, very hard, that the fascinating, infuriating human would follow him down the hall.

Alyssa Day is the pen name (and dark and tortured alter ego) of author Alesia Holliday. As Alyssa, she is a New York Times and USA Today best-selling author with more than a million books sold, and she writes the Warriors of Poseidon and Cardinal Witches paranormal romance series and the Tiger’s Eye Mysteries, a paranormal mystery series.  As Alesia, she writes comedies that make readers snort things out of their noses, and is the author of the award-winning memoir about military families during war-time deployments: Email to the Front. She has won many awards for her writing, including Romance Writers of America’s prestigious RITA award for outstanding romance fiction and the RT Book Reviews Reviewer’s Choice Award for Best Paranormal Romance novel of 2012.

Alyssa is a diehard Buckeye who graduated summa cum laude from Capital University Law School and practiced as a trial lawyer in multi-million dollar litigation for several years before coming to her senses and letting the voices in her head loose on paper. She has lived all over the country, including Florida, Mississippi, Washington state, Ohio, Wisconsin, Oklahoma, Colorado, Illinois, Texas, Alaska, Michigan, Virginia—and she has lived all over the world: the Philippines, Turkey, and Japan. She loves to travel, and just got back from trips to St. Pete Beach, Florida, New York City, Atlanta, and Savannah, and is heading to Houston soon. She currently lives in Florida with her Navy Guy husband, two kids, and any number of rescue dogs. 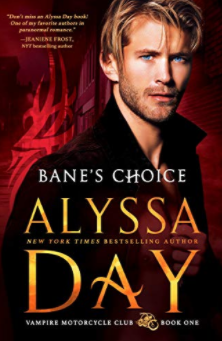 Bane lost his humanity ages ago. Nothing is more important than protecting his Vampire Motorcycle Club from the death magic invading his territory. The most ancient of vampires, he seeks cold, unfeeling, bloody vengeance…until a frustratingly sexy human doctor is thrust into his path. She tempts Bane to distraction. And distraction is deadly in his world.

Buttoned-up and meticulous Dr. Ryan St. Cloud never thought she’d find herself in the mix of a motorcycle club, let alone one full of terrifyingly badass vampires. Or how intrigued she is by their dark and enigmatic leader, who seems balanced on the knife’s edge of killing her…or claiming her.

But Bane’s choice is harder than it seems, because when that danger hits too close to home, he’s forced to choose between her life and everyone else’s…

Where Romance and Pop Culture Live Happily Ever After.
All Posts
PrevPreviousHalloween Rom Com: “The Problem with Love Potions” Part Two
NextTop YA Trilogies to TryNext