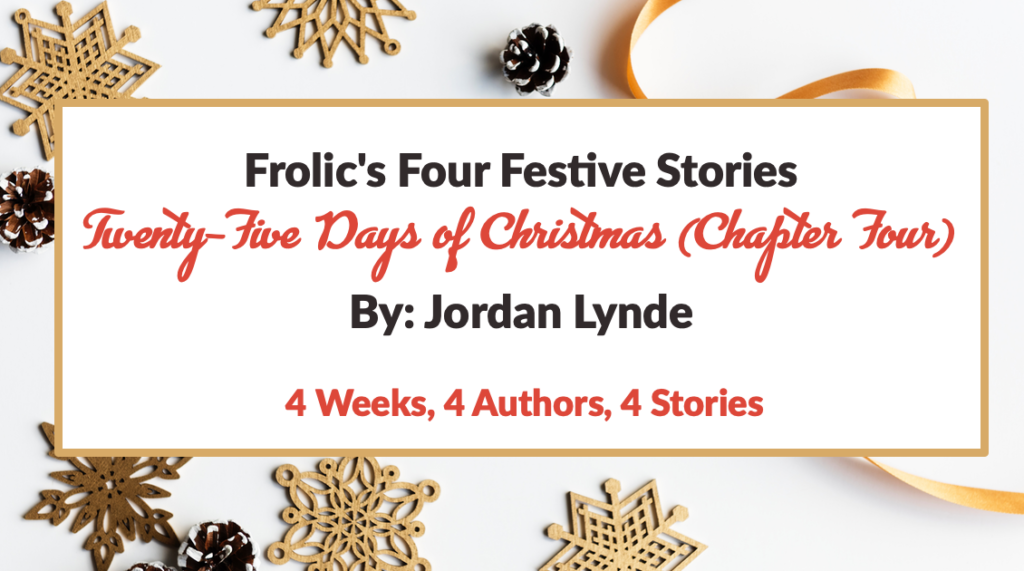 [Note From Frolic: We are so excited to announce our Festive Four Stories! Every week in December we will have a new short holiday story from 4 of your favorite authors. This week we have Wattpad superstar Jordan Lynde!]

On the seventh day of Christmas my best friend gave to me: seven bath bombs for bathing.

“Are you trying to tell me I smell?”

“I wouldn’t insult your hygiene like that. I’m telling you to relax. It’s the weekend. Take a warm bath and chill out, okay?”

On the eighth day of Christmas my best friend gave to me: eight packs of cookies for snacking.

Joon peered around the stack of Oreos in his arms. “Delivery!”

Fresh from the bath, the freezing air coming from the door felt ten times more piercing. “Get in, hurry!”

Joon set the cookies and jug of milk I hadn’t noticed on the counter. “Sorry for dropping by unannounced. The milk made things time sensitive.”

“It’s so cold out there I’m sure I could keep all my groceries out there just fine.”

“You’re not wrong. You put up more decorations?”

“Yeah,” I said as he gazed around the room, taking in the fuzzy stockings on the wall and white lights in the windows. “The Christmas tree felt out of place with nothing else so I dug out some of our old stuff. Um. I mean mine old stuff.”

“Looks great. Did you see there’s a Grinch marathon on TV starting at five? The live action, the cartoon. All of them. I meant to text you earlier but I was kind of busy so I forgot.”

“You’ve got plenty of cookies to snack on while you watch.”

“I never thought I’d say this, but I have too many cookies,” I said, spreading my arms in an overdramatic attempt at measuring the pile of Oreos on the counter. “Was this some kind of scheme to get me to invite you to stay and watch the Grinch all night with me?”

To my surprise, Joon blushed. Joon never blushed. “No!”

“So, you don’t want to?” I asked, wondering if I could get any other reactions from him.

“Awesome. Stay, then. We can order a pizza.”

Even more amazingly, he grew shy, ducking his head as he answered. “Okay…”

I turned away to collect myself and realized with a jolt that my lace underwear had somehow caught on the elbow of my stitched sweater. The room felt ten times hotter as I snatched it off and hurled it into my bedroom.

“You know, you really don’t have to keep up with your plan,” I said, trying to clear the lingering awkwardness. “I’m doing okay, really.”

“I’m not stopping,” he answered simply. “I meant to ask though, are you going home for Christmas this year?”

I plopped onto the couch beside him. “No. We don’t really have the money since we’re paying for this apartment. I haven’t told my parents I’m not going to Evan’s though. I don’t want them to worry.”

“Amalia’s parents invited me over to their place since they live close, so I’ll probably go there. What about you? Are you going home?”

“Yeah, my parents get overly excited about family events like this. I get it. Why? Are you going to be lonely without me?”

I shoved him playfully. “Yeah, right.”

“I can print out a photo of me to put on your bedside. That way I’ll always be with you.”

“I think I’ll be okay without that. What do you want on your pizza? I’m going to get a Hawaiian since Evan isn’t here to complain about how disgusting it is.”

Joon slapped my back. “See! You don’t need him!”

“Yeah, I don’t,” I said confidently. I didn’t need Evan. It still hurt, but the support from my friends made it easier. Little by little, the see-saw of my life was beginning to even out. “Maybe I’ll get two Hawaiian pizzas.”

“There you go! Let’s stuff our faces and watch Christmas movies all night!”

On the ninth day of Christmas my best friend gave to me: what should have been nine dancing Santa Clauses but instead I bought you a defuzzer to keep you from walking out of your apartment with certain things stuck to your sweaters again.

I texted Joon immediately after finding the gift in my mailbox. I literally hate you.

On the tenth day of Christmas my best friend gave to me: ten Christmas songs for jamming.

I laughed when I realized it was You’re a Mean One, Mr. Grinch on repeat for every track.

On the eleventh day of Christmas my best friend gave to me: eleven bags for piping (you better make me a cake for all this effort).

I snorted as I picked up the plastic piping bags. Not subtle at all.

On the twelfth day of Christmas my best friend gave to me: twelve Drumsticks for eating. Variety flavored. I hope you find this outside before your neighbor steals it. You weren’t home and I couldn’t stay. The original twelve days are over so now I have to get really creative.

I’d found the ice cream cones and note after I’d returned from the grocery store. It was a good thing Joon had missed me— otherwise he would have spoiled his own surprise. I’d been in the middle of decorating a cake for him when I’d run out of green frosting. The Grinch felt like a suitable design choice for it.

“There we go,” I said as I finished the detailing. For a beginner baker, it didn’t look half bad. Joon would love it.

The doorbell rang with precise timing. It had to be Joon. He always knew the exact second any food finished cooking.

“Nell, thanks for answering,” Evan spoke over me in a rush, not even asking before pushing me aside so he could enter my apartment.

A heavy feeling settled in my gut. “What are you doing here?”

“You really need you to stop ignoring me. I just want to talk. Can we talk, please?”

“Why didn’t you just call me? Or warn me you were coming over?”

I felt around my pockets for my phone and realized it wasn’t on me. “I must have left my phone in my car.”

Evan’s eyes wandered to the Christmas tree. “You set up a tree without me?”

“It’s not. We’re not together, Evan. You cheated on me, or do you not remember? I saw you’re in a relationship with the girl!” I snapped.

He came over to me, putting his hands on my shoulders. “I’m not in a relationship with her. She posted that herself. What happened was an accident.”

“Oh, no. I read about this online. The number one excuse.”

“It’s not an excuse, it’s the truth! I didn’t mean for it to happen. Are you really going to throw five years down the drain for something like this?”

I stepped out of his grip, shaking my head. I knew it would come to this. The answer came easily to me. “Yes. I am.”

“We’re over, Evan. I don’t regret dating you, but things could never go back to the way things were. I deserve someone who doesn’t have accidents.” The words came out strong. My chest didn’t ache. In fact, it felt good.

The color drained from Evan’s face. “Nell, come on. Give me another chance.”

“It’s our month. It’s Christmas. How can you ruin Christmas for us like that?”

I looked at him evenly. “Christmas isn’t ruined for me.”

“You can’t even see your family. All you have is me. My family is expecting you. I’ll do anything I can to make it up to you. I’ll delete every girl’s number from my phone— from my Facebook, anything!”

A jolt of anger went through me. Evan wasn’t all that I had. “I have plenty of other people in my life, Evan. And what kind of relationship would that be if I dictated everything you did? I don’t want to hear any more. Just leave.”

Evan ran his hands through his hair, beginning to pace back and forth. “Nell, think about this. Please.”

“I have. For three weeks. I’m moving on now. You should too.”

“Moving on? How can you move on so quickly after…?” He trailed off, his eyes landing on the Grinch cake on the kitchen table. “It’s him, isn’t it?”

“He’s around you all the time now. What, as soon as we break up he thinks he can take my place? I knew I didn’t like him for a reason. What the hell are these?” Evan demanded, picking up the pile of Joon’s notes and reading through them. “Really, Nell? Five years meant nothing to you?”

My brain almost couldn’t keep up with the change of atmosphere. Why was he getting angry at me? “Evan, I don’t need to explain anything to you. Just leave.”

“I’ve been having the worst time of my life and you’re already off happy with someone else. Wow.”

“I’m not with anyone! Joon is my best friend, in case you forgot! Why are you being like this?”

“Best friend? Yeah right. That’s not what he thinks. I know guys like Joon.”

I bit back my retort. I wasn’t letting this happen. Evan wasn’t going to ruin any more of my life. “Evan. Can you please just leave? I want to keep our happy memories. I don’t want for them to be replaced by the bad ones.”

He fell back a step at that, his stance losing some of its tension. “Can I at least give you your presents?”

“Donate them,” I told him. “Donate them to people who actually need gifts. It’s what I plan to do with yours.”

Evan shoved his hands into his pocket. “You’ve decided, then.”

“Yes. I also changed my classes next semester so we won’t share any.”

Evan’s jaw tightened and he turned away from me. “Okay.”

I walked to the door and opened it. “Don’t feel guilty about what happened. I’ll be fine. Don’t let this ruin Christmas for you.”

“I’m going to miss you, Nell,” he said, his voice breaking on my name.

Evan paused at the threshold of the door. “Maybe we can talk about it later?”

“Bye,” I said, barely managing to close the door behind him before I broke down into tears.

[Check back tomorrow for the final chapter!] 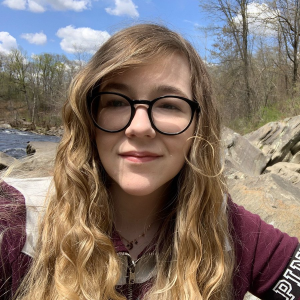 Jordan Lynde is a YA/NA author from Western Massachusetts. She started writing at the age of ten and has now amassed over 400,000 followers on Wattpad and over 130 million reads. When she's not writing, you can find her eating at new places, interacting with her readers on social media, or watching k-dramas with her cats.
All Posts
PrevPrevious18 Life Changing, Diverse YA Books That Should Be Required Reading in All Schools
NextSeven Romances That Will Have You Ugly Crying…You’re WelcomeNext