300 Episodes and Going On 15 Seasons – Why Supernatural Defies The Odds! 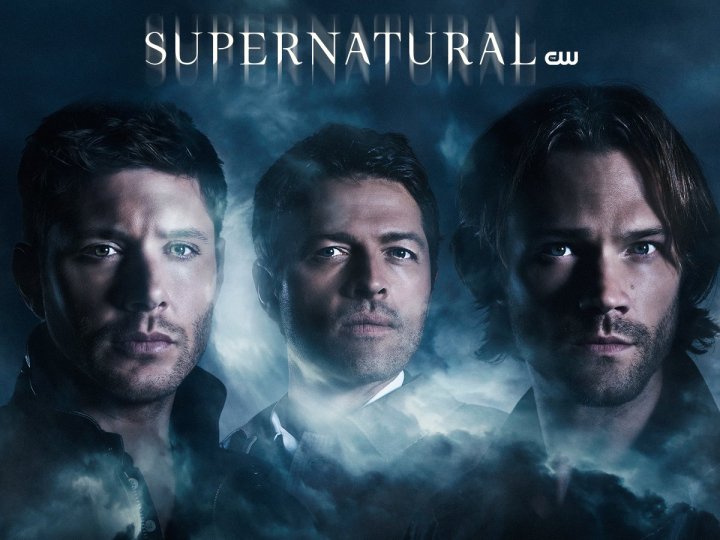 Supernatural fans got the good news that the show has been renewed for a 15th season last week, the same day that a new episode aired. It wasn’t a complete shock, but it also wasn’t a given, so there was a collective sigh of relief that the show will continue at least one more year, making it one of the longest running continuous shows in television history. What is it that makes a little show on the CW capable of such longevity? You actually don’t have to dig deep or look far and wide to find out. In fact, last week’s episode happens to be a good example of the unique and special mix of ingredients that has allowed Supernatural to outlast most other shows.

The twelfth episode of Season 14 which aired last week, Prophet and Loss, came after back to back episodes that raised the emotional stakes for brothers Sam and Dean Winchester, and engaged the show’s audience by doing so. After losing his brother to Michael’s possession – twice – Sam is frantic to get Michael out of Dean’s head once and for all. After fighting and managing to trap Michael in his own head, Dean is facing a different type of desperation; he knows he can’t keep Michael contained forever. As the constant screaming and pounding in his head make even everyday things like conversation or driving Baby difficult, Dean knows he needs to come up with a solution quickly. We found out in the last two episodes, thanks to Billie’s omniscience, that there’s only one solution, and that’s sealing Dean in a warded Ma’lak box and sinking it to the bottom of the ocean.

This is one of the things that Supernatural does incredibly well. The show creates a scenario in which one of its protagonists is facing a fate so horrific that we can barely imagine it. Yes, the stakes are high for the rest of the world, because if Michael gets out he will end it, but that’s not the emotional hook that keeps viewers watching and caring. It’s the threat to a beloved character who has become as close as a real-life friend which made fans cringe in horror at what is in store for Dean. There were fans who were so upset they had to walk away from the show temporarily, because being locked in a box and sunk in the ocean and then kept alive by a tormenting archangel for eternity? That’s unthinkable.

Supernatural has set up this sort of scenario many times during its fourteen seasons on the air. Dean finding out that he might have to kill Sam way back in Season 1. Unthinkable. Sam dying and Dean making a deal in exchange for his life that will send him to Hell, for real. Unthinkable. (And to make sure that the threats set up are not idle ones, the show really did send Dean to Hell, and it really was so horrific it was unthinkable). Similarly, the threat of Sam having to throw himself into the pit along with Lucifer in order to save the world was unthinkable – and it happened anyway.

So now, when Dean is faced with the same sort of save-the-world-by-damning-yourself option, fans don’t have the luxury of saying oh, that will never happen. Maybe it will, and it will rip our hearts out just as much as the previous nightmare scenarios did.

There are many other high-stakes moments that play out on the show, including the threat of losing someone else the Winchesters care about and consider family – Mary, Bobby, Castiel, Jack, Kevin, Charlie. We are well aware that these losses may actually happen too, because they have happened, and that adds to the constant tension. But it is the anticipation and dread of an unthinkable sacrifice we know is coming which really pulls us in emotionally as fans. Those high stakes scenarios are reason number one that this show keeps going. That’s where we were as last week’s episode began, primed for heartbreak.

Supernatural does not disappoint. Without even a moment to get our bearings, as the episode begins we’re in the Ma’lak box with Dean on the bottom of the ocean. The camera stays close on his face as he struggles to stay calm in impossible circumstances. We hear the creak of the box, see the first drips coming through, and we know that it won’t be long. Jensen Ackles shows us Dean knowing the same thing, vividly portraying the moment that panic overwhelms Dean and he starts to fight desperately to get out, pounding on the box, nails scratched bloody, screaming for his brother to come save him.

Ackles confided that during the filming of that scene, he got emotional for real. It was unexpected, and as it went on and on, his genuine emotional reaction got to everyone. When he finished the take, even the seasoned crew, most of whom have been with the show for all fourteen seasons, were tearful.  That’s reason number two that Supernatural is still on the air. After fourteen seasons of playing Dean Winchester, Ackles is doing the opposite of phoning it in. I’ve been on set and watched him film an emotional scene, and there is nothing manufactured about it. He’s said that he knows Dean so well, that he long ago stopped having to think about something sad to tap into Dean’s emotions; he just lets himself be Dean, and the emotion comes. Does it ever!

That goes for the entire crew and the other lead actors as well. They care about this show, and these characters, and it shows. In fact, both Misha Collins and Jared Padalecki also got to let their characters’ genuine emotions come through in this episode.

While the show’s set up of an unthinkable fate for one of its heroes is an effective emotional hook for its fans, there’s another reason we care so much and feel so much when we watch this show, and that is reason number three. The characters themselves have such deep and genuine bonds that when one of them is in peril, the pain and terror and rage of the other is intensely evident, and the show is smart enough to let us experience the situation through the other’s eyes.

In last week’s episode, we see Castiel’s fear and frustration as he tries again and again to talk Dean out of his plan. We don’t always see a lot of overt emotion in the angel, but his pleading and disbelieving “So this is goodbye?” let us see the genuine hurt and pain that he sometimes hides. 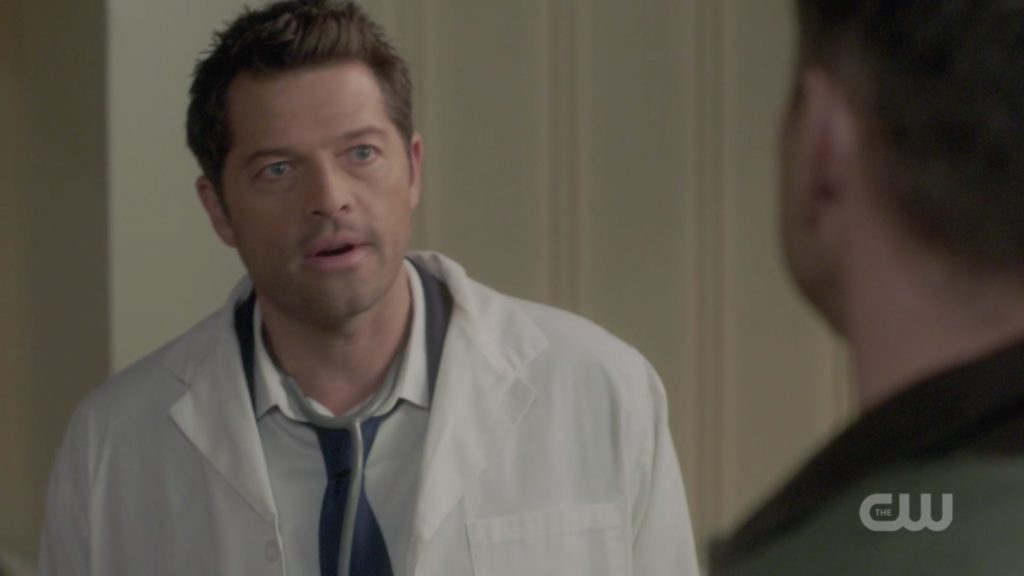 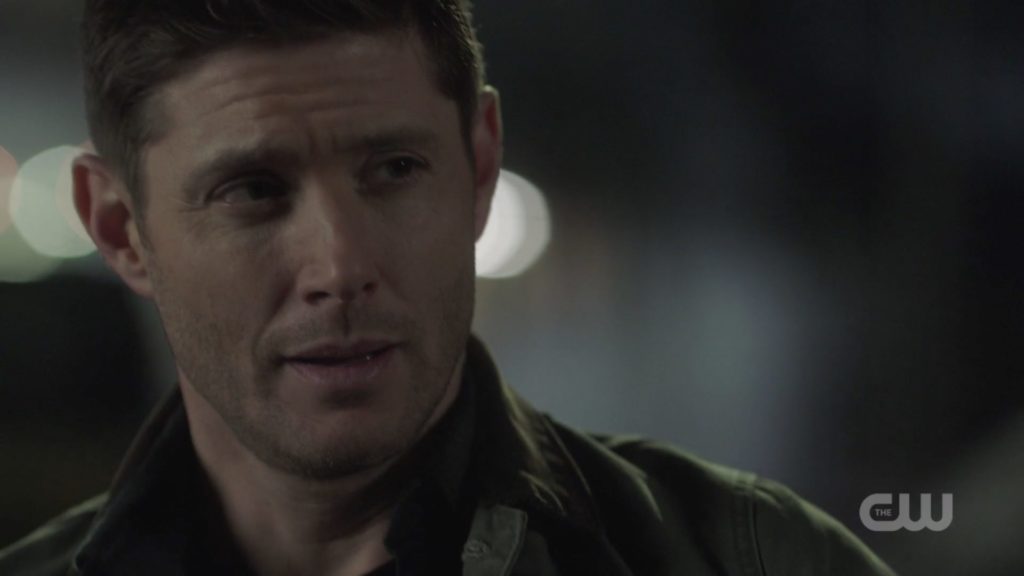 And then there’s Sam.  In last week’s episode, we watch as Sam’s protective denial and defenses slowly and inexorably disintegrate in the face of his brother’s stubborn determination to sacrifice himself in this horrific way. Jared Padalecki’s acting throughout the episode was masterful; you could see the cracks slowly opening, and underneath glimpse the depth and intensity of his fear and pain. The fact that we know and love these characters and the quality of the acting produces empathy in us as viewers, which means we too feel all that love and fear and pain. Padalecki takes us on a tumultuous ride through Sam’s desperation as he unravels physically and emotionally, trying to get through to Dean.

The ending scene hurt to watch; I was sobbing as soon as Sam lashed out with words and fists and broken-hearted pleas to his big brother. Ackles and Padalecki onscreen together has been lightning in a bottle from the beginning, and their chemistry and connection has only become more real with time. Watching them struggle together, first with fists, then with a desperate embrace, is like experiencing the emotional rollercoaster yourself. You’re not just watching, you’re feeling.

That’s what makes a television show more than just a show. The emotional connection that fans continue to feel for “the little show that could” is alive and well, and as long as we continue to care, we’ll keep hoping for more renewals.

Stay tuned for next month’s Supernatural article, all about the milestone 300th episode and the return of an iconic character!

Lynn Zubernis PhD is a psychologist and university professor who has published many books about fandom and fan psychology and why it’s healthy and positive and just plain fun to be passionate about the things we love. Her most recent books, There’ll Be Peace When You Are Done: Actors and Fans Celebrate the Legacy of Supernatural, and Family Don’t End With Blood: Cast and Fans on How Supernatural Changed Lives, have powerful chapters contributed by the actors and the fans of Supernatural, the show she’s passionate about. You can also go behind the scenes of that show and explore the ins and outs (so to speak) of fanfiction and fandom in her book Fangasm Supernatural Fangirls.
All Posts
PrevPreviousLGBTQ Paranormal Romance Starter Guide by Jenn Burke
NextExclusive: Annabeth Albert’s Frozen Hearts Series Cover Reveals!Next