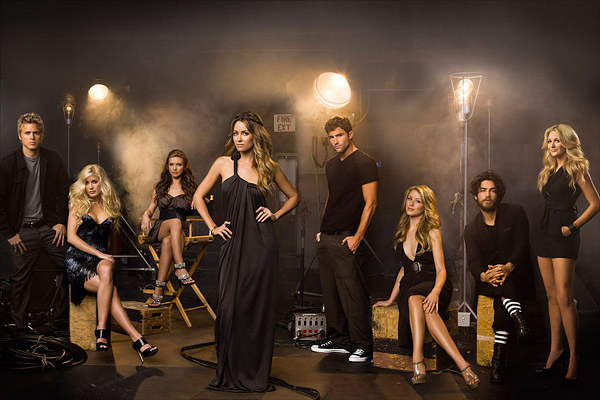 [Note from Frolic: We are so excited to have author Amy Mason Doan guest post on the site today. Take it away Amy!]

No? Right – that lifestyle belonged only to the wealthy, telegenic, and mostly white castmembers of MTV’s The Hills, a spinoff of Laguna Beach that premiered on May 31, 2006. I got hooked on the show back in the day—a more innocent time when “unscripted” television was still a novelty and we didn’t realize how extremely scripted it was. I was born in Orange County and lived there again in my 20s, so I’ve always felt a love-hate connection to the franchise (A character in my new novel reluctantly accepts a job working on a reality show called “The Gold Coast.”)

So when I saw that the show was rebooting June 26 as The Hills: New Beginnings, I checked out the original’s pilot one night. Confession—I’ve now watched every scene of every episode, from the moment when Whitney bites it on Good Morning America wearing Hilary Swank’s Oscars gown to the finale, where the Hollywood hills backdrop rolls away, a nifty fourth-wall-busting moment in which the show finally ‘fesses up to its own artifice.

I was shocked by how different it felt to watch the series today—as a married, 46-year-old mom in the #MeToo era.

Time to look at The Hills through more mature eyes. Or, as Natasha Beddingfeld would put it, “Open Up the Dirty Window.”

Here’s what I learned. We’ll ease our way in, leaving the heavy stuff for last:

I spotted a baby-faced Tom Sandoval from Vanderpump Rules in episode 8, where Whitney and Lauren are scouting male models, and joked about it with my husband. Then I spied Landon Clements from Southern Charm working as the receptionist at Bolthouse a few episodes later, and it got spooky. I don’t know what’s more jarring—the way reality stars live in some sort of para-dimension that transcends time, or how much brain space I’ve dedicated to reality-star facial recognition.

Lisa Love. Brent Bolthouse. Amy Astley. These are names with oomph. Names you can’t forget even when ones like The Red Jumpsuit Apparatus (a band that cameo’d on the show) have long since faded. These people are probably why I named my daughter Miranda Mason.

3. The “uptight” intern everyone ridiculed was clearly destined to found a billion-dollar company.

In three episodes of Season 2, super-intern Emily Weiss swooped into L.A. from New York and intimidated the Teen Vogue L.A. crew with her east coast formality and casual use of terms like “chinoiserie.” Lauren and Whitney mocked her behind her back and rejoiced when their boss nixed her floral centerpiece at an editorial dinner. But Weiss had the last laugh. She went on to create Glossier, a unicorn startup now valued at $1.2 billion. (Conrad and Port have done just fine with their own apparel and lifestyle brands, but haven’t approached this valuation.)

Good for you, Emily. Hope you’re celebrating with as many chinoiserie floral tablescapes as you want.

Now onto the tough part.

4. The male-female relationships are horrifying.

Controlling Spencer, withholding Justin-Bobby, and erratic Jason are no longer amusing “bad boys.” Now that I have a daughter, they’re the stuff of nightmares. Watching Heidi’s mom cry over Spencer’s grip on her little girl made me cry, too. He’s like a cult leader, systematically separating her from her friends and family. I’ll cry if my child doesn’t have better sense than to run from an opportunist like this—or if she loses herself in search of reality stardom. Spencer may have played up his villainy for the cameras, but that mom’s tears are real. And Justin-Bobby? I don’t care that he wore combat boots to the beach, that he rarely bathed, or that he belched in Lauren’s face at sushi. Everything about his relationship with Audrina is on his terms, and the age-old trope of the “woman coming back for more pain” sucked in viewers.

Now I’m ashamed that I was one of them.

5. Finally, the women always attack each other first.

In nearly every episode, Spencer blames Heidi’s estranged best friend Lauren for his relationship problems. See, he’s not at fault for getting caught draped over Playboy models at a club, or crashing her Vegas work trip and embarrassing her in front of her bosses. Lauren is, for telling Heidi that Spencer is a “sucky person”! This dynamic of best friends splitting when one of them dares to get real about the other’s relationship is the throughline of the entire series. And it brought back a painful memory.

One month when I was in my 20s, my roommate and I both learned that our boyfriends were cheaters. Sloppy cheaters.

First, my roommate discovered through her coworker that my boyfriend went on a ski weekend with an old flame. I vowed I’d dump him. Thanked her for having the guts to tell me. Hugged her, called him and broke it off after he admitted it was true.

Three weeks later, she found an empty condom wrapper in her boyfriend’s bedroom…and it wasn’t their brand. He insisted that he’d been tempted but was “unable to go through with” the deed. I said that was an obvious lie, that only a fool would believe him, and she deserved better.

So, free of our dud lovers, grateful for the mutual honesty, we stayed besties forever, right?

No. I gave my “sucky person,” as Lauren would put it, a second chance. My roommate took back Mr. Trojan Wrapper. Unable to bring these excellent specimens of humanity home (or look each other in the eye), we stopped talking to each other, though our romances didn’t survive the year.

This is one thing The Hills did right: it showed me what I’ve learned since I was 22. And even if I could pull off a babydoll dress and get past the bouncer at Area, I’d never want to go back. 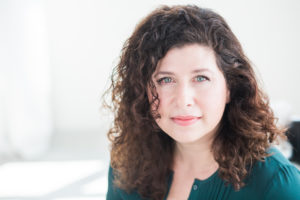 Amy Mason Doan lives in Portland, Oregon. She grew up in California, but as a girl she visited the Oregon Shakespeare Fest with her grandparents every year, and she now considers both states home.  Amy’s debut novel, THE SUMMER LIST, was named a Best Book of Summer 2018 by PopSugar, Coastal Living, Family Circle, and The Globe & Mail. SUMMER HOURS, her highly-anticipated second novel, was published on June 4, 2019.  As a writer for publications including The Oregonian, San Francisco Chronicle, Wired and Forbes, Amy has interviewed everyone from beer-brewing monks to nanotechnologists. Amy has an M.A. in Journalism from Stanford University and a B.A. in English from U.C. Berkeley.  Learn more at www.amymasondoan.com and connect with Amy on Facebook (https://www.facebook.com/amymasondoanauthor) , Twitter (https://twitter.com/AmyLDoan), and Instagram (https://www.instagram.com/amymasondoan/). 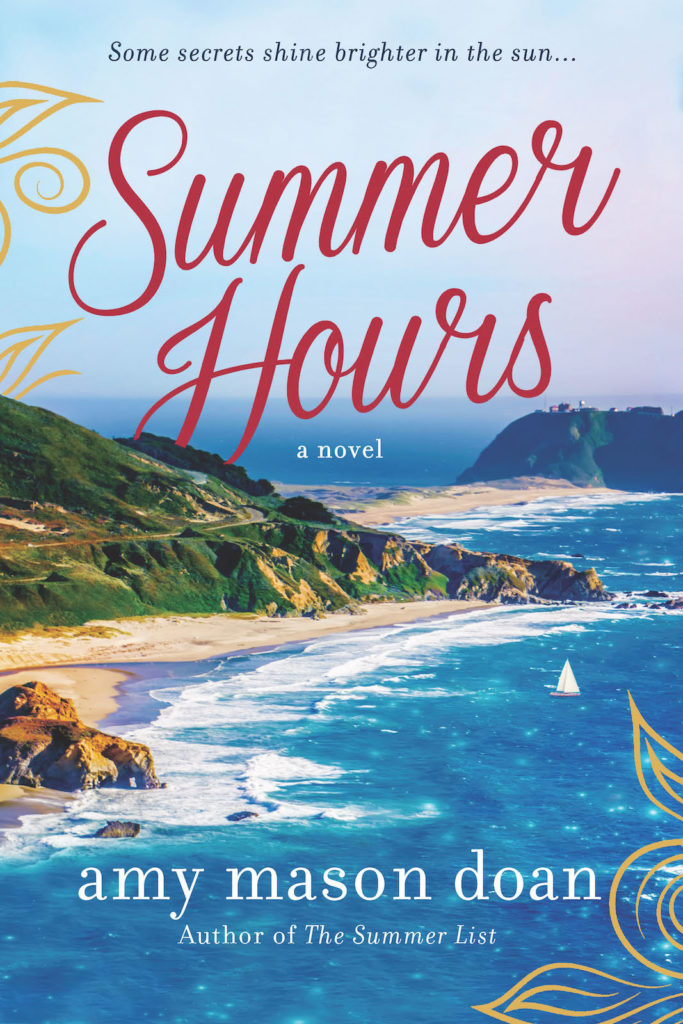 Becc was the good girl. A dedicated student. Aspiring reporter. Always where she was supposed to be. Until a secret affair with the charming Cal one summer in college cost her everything she held dear: her journalism dreams; her relationship with her best friend, Eric; and her carefully imagined future.

Now, Becc’s past is back front and center as she travels up the scenic California coast to a wedding—with a man she hasn’t seen in a decade. As each mile flies by, Becc can’t help but feel the thrilling push and pull of memories, from infinite nights at beach bonfires and lavish boat parties to secret movie sessions. But the man beside her is not so eager to re-create history. And as the events of that heartbreaking summer come into view, Becc must decide if those dazzling hours they once shared are worth fighting for or if they’re lost forever.

Set in the mid ’90s and 2008, Amy Mason Doan’s Summer Hours is a warmly told novel about the idealism of youth, the seductive power of nostalgia and what happens when you realize you haven’t become the person you’d always promised to be.

Where Romance and Pop Culture Live Happily Ever After.
All Posts
PrevPreviousA Food Network Champion Takes on the World of Romance
NextHow One Author Found Love In The Time of Algorithms by Daniela PetrovaNext