A Must-Read for Any Poet: An Excerpt from I Have Been Buried Under Years of Dust by Valerie Gilpeer and Emily Grodin Excerpt 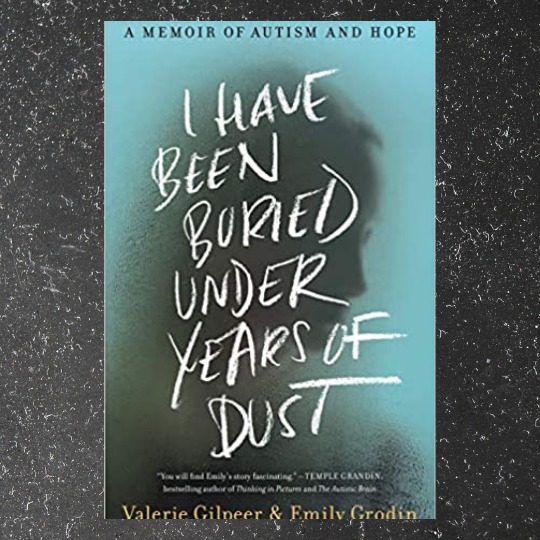 We are so excited to bring you this exclusive excerpt from I Have Been Buried Under Years of Dust by Emily Grodin and Valerie Gilpeer! 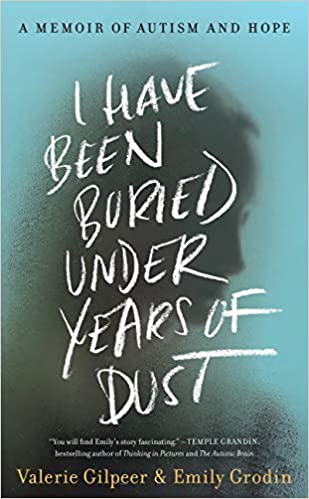 About I Have Been Buried Under Years of Dust:

A remarkable memoir by a mother and her autistic daughter who’d long been unable to communicate—until a miraculous breakthrough revealed a young woman with a rich and creative interior life, a poet, who’d been trapped inside for more than two decades.

“I have been buried under years of dust and now I have so much to say.”

These were the first words twenty-five-year-old Emily Grodin ever wrote. Born with nonverbal autism, Emily’s only means of communicating for a quarter of a century had been only one-word responses or physical gestures.

That Emily was intelligent had never been in question—from an early age she’d shown clear signs that she understood what was going on though she could not express herself. Her parents, Valerie and Tom, sought every therapy possible in the hope that Emily would one day be able to reveal herself. When this miraculous breakthrough occurred, Emily was finally able to give insight into the life, frustrations, and joys of a person with autism. She could tell her parents what her younger years had been like and reveal all the emotions and intelligence residing within her; she became their guide into the autistic experience.

Told by Valerie, with insights and stories and poetry from Emily, I Have Been Buried Under Years of Dust highlights key moments of Emily’s childhood that led to her communication awakening—and how her ability rapidly accelerated after she wrote that first sentence. As Valerie tells her family’s story, she shares the knowledge she’s gained from working as a legal advocate for families affected by autism and other neurological disorders.

A story of unconditional love, faith in the face of difficulty, and the grace of perseverance and acceptance, I Have Been Buried Under Years of Dust is an evocative and affecting mother-daughter memoir of learning to see each other for who they are.

“Is this Tom Grodin, father of Emily Grodin?” the woman on the other end of the phone asked my husband. She sounded out of breath and fraught.

Now what? I wondered. Tom and I were settling down for the night, getting ready for bed. That the call was tied to our daughter, Emily, twenty-five, went without saying. We were used to such calls, just not what came next.

“The police are here, seven of them,” she said. “Emily’s caregiver has been hurt and she needs to go to the ER. I’m not sure exactly what happened, but apparently Emily got aggressive and now there’s a lot of commotion. She’s very upset. I need you to come get your daughter. Now.” Her voice echoed across the room. My stomach was immediately in knots. In minutes, Tom was dressed and out the door.

There’d been issues before, meltdowns, times we needed to go talk with her and smooth things over. Now, though: A caregiver going to the hospital? Seven police officers? Noth- ing like this.

As I waited for Tom and Emily to return to our Encino home, I wandered from room to room, wanting to change things for her, wishing we didn’t find ourselves in this situ- ation, but unable to fix anything. Emily was our only child. A beautiful, amazing, precious young woman. She’s also au- tistic and pretty much nonverbal. If I asked her a question, she could give me a yes or no answer, but she’d be unable to elaborate, to express verbally her pleasure or displeasure, or to open a line of dialogue with us or anyone else. This limita- tion made her appear, to those who failed to understand the disability, as if she were locked inside herself and incapable of making decisions or having preferences. She was unable to tell us what it was like being Emily, how the autism shaped her, or the way words, as well as the world, failed her. She couldn’t tell us if she had a stomachache or a toothache or needed help in some way. She appeared to live in an isolated space to which we had repeatedly tried to gain access and failed. She was alone in there.

When her inability to communicate was coupled with frustration, the often dramatic-looking symptoms of autism—compulsive and/or repetitive behaviors, self-injury, disruptive vocalization—emerged. Simply stated, she could have meltdowns. They could happen with anyone and in any locale.

It had been a little easier when she was younger. While her outbursts, even then, were difficult, now that she was a fully grown adult and commanded space, her voice was loud and powerful, her  physical  presence  imposing,  and the incidents had grown harder to manage. Emily could act differently than other people, often in ways that could be startling.

When the call came, she was living in an apartment in Westwood with support staff and participating in a transition program at the UCLA Extension school for students with spe- cial needs. This was all part of our experiment in independent living for her, a goal encouraged and valorized by so many of our friends raising young adults with special needs. We wanted to give her the skills she’d need to live as independently as possible, preparing her for a life without Tom and me to watch over her, to speak for her, to be the buffer between Emily and the world. Since her very first diagnosis, we wor- ried how Emily was going to manage in this world when we were gone and no longer here to be her intermediaries.

Tom and I had been older parents when Emily arrived. While most parents of young adults at our stage of the game were now looking forward to seeing their children make in- dependent lives for themselves, we were simply hoping to get her on footing stable enough to manage without our con- stant intervention.

In some ways, that January call shouldn’t have been quite so surprising. Over the preceding year, her meltdowns had become progressively more challenging. Recently, the agency providing her support had demanded we obtain additional behavioral services to try to rein in her conduct, and we had. We acquiesced to their request even though, after twenty- plus years of behavioral intervention, we’d found such ther- apies mostly ineffective with Emily. Everything we could do had already been done. As her desire for autonomy ran up against her limitations with speech, the overflow of emo- tions and frustrations had grown more insistent.

To have a child with autism and to be told she’ll never be capable of genuine communication, that her life will always be severely limited, is to know deep and abiding grief. From our experience, a child with autism is like a person locked inside a closet at the top of a collapsed stairway, in a boarded-up house that’s hidden by overgrown vines, down a driveway blocked by deadfall on a street bypassed by the highway. This closet is the entire life of the autistic individ- ual, removed from the world. Yet  the worst horror is the thought that within that closet, a single light burns brightly. We’d seen firsthand and from a very young age the spark and animation in Emily’s eyes and sensed an untold intelli- gence confined within her. Yet we’d been told by countless experts countless times that our dreams for her were mis- placed. She’d never communicate. Her life would be forever limited. After twenty-five years we’d come to accept this real- ity, while still hoping it could be otherwise. On the one hand, we acknowledged the objective reality of how she presented to the world and accepted and loved her completely. We also nurtured stubborn seeds of hope that, to almost all profes- sionals we interacted with, were irrational. Could our dream actually come to pass, that Emily might finally be able to tell us about her life? If so, she might escape some of the autism constraints that had long held her. We clung firmly to the belief that one day she might be able to free herself from the frustrations that had become so hard for her to bear.

I worried, though, that we’d been premature in thinking she was ready to live away from home. Perhaps we were de- luded about what she was capable of. We had no idea how to move forward into better terrain.

What most people who witnessed her episodes didn’t realize was that these behaviors were her form of commu- nication. Without the  ability  to  formulate  words,  she  had no other mode of expression. We knew and understood this dynamic, yet by this point, the explosions had become an ineffective and increasingly problematic way to make herself heard. We needed to help her find another strategy.

The UCLA arrangement had been a beginning, an inves- tigation into figuring out her strengths and weaknesses. The experiment, though, was not quite working out the way we’d hoped. Despite having arranged support 24/7 to assist her in navigating the program, the campus, the community, and the social interactions, to give her the experience of living away from us, we found ourselves contacted regularly when an issue with her behavior arose.

Little things could set her off. A change of expected plans or a roadblock of any form (both literal and figurative) might result in a flare-up with distressed vocalizations, finger flap- ping, yelling, and other  agitated  behaviors  that  displayed her displeasure or anxiety. On more than one occasion, a meltdown in public had drawn the attention of a security guard or Trader Joe’s manager who tried to intervene. While these authority figures may have had the best of intentions, their involvement sometimes escalated things and made the episode worse. In a full-scale incident, Emily might scream as if her life were being threatened. She might hit herself in the head or bite her finger. If she was trying to get someone’s attention, she might get aggressive: grab, pinch, or even rake their skin with her nails. Though you’d think we’d be used to this by now, sometimes these explosions still alarmed Tom and me. When Emily was upset and made her disturbance known, even those of us who knew her kind and gentle spirit could be left reeling. I could imagine how her behavior must have been greeted by those who didn’t know her or who hap- pened to observe her in public.

Emily Grodin is an honors student attending Los Angeles Valley college and is a writer and poet.

Valerie Gilpeer has been an attorney for 40 years.  For the past 2 decades she has focused on disability rights.  Valerie, her husband Tom Grodin, and their daughter Emily live in Encino, California.

Where Romance and Pop Culture Live Happily Ever After.
All Posts
PrevPreviousWriting Light into the Darkness by Lisa Berne
NextBook of the Week: Twice Shy by Sarah HogleNext