A Perfect Partnership: The Art of Co-Writing with Shayla Black and Lexi Blake 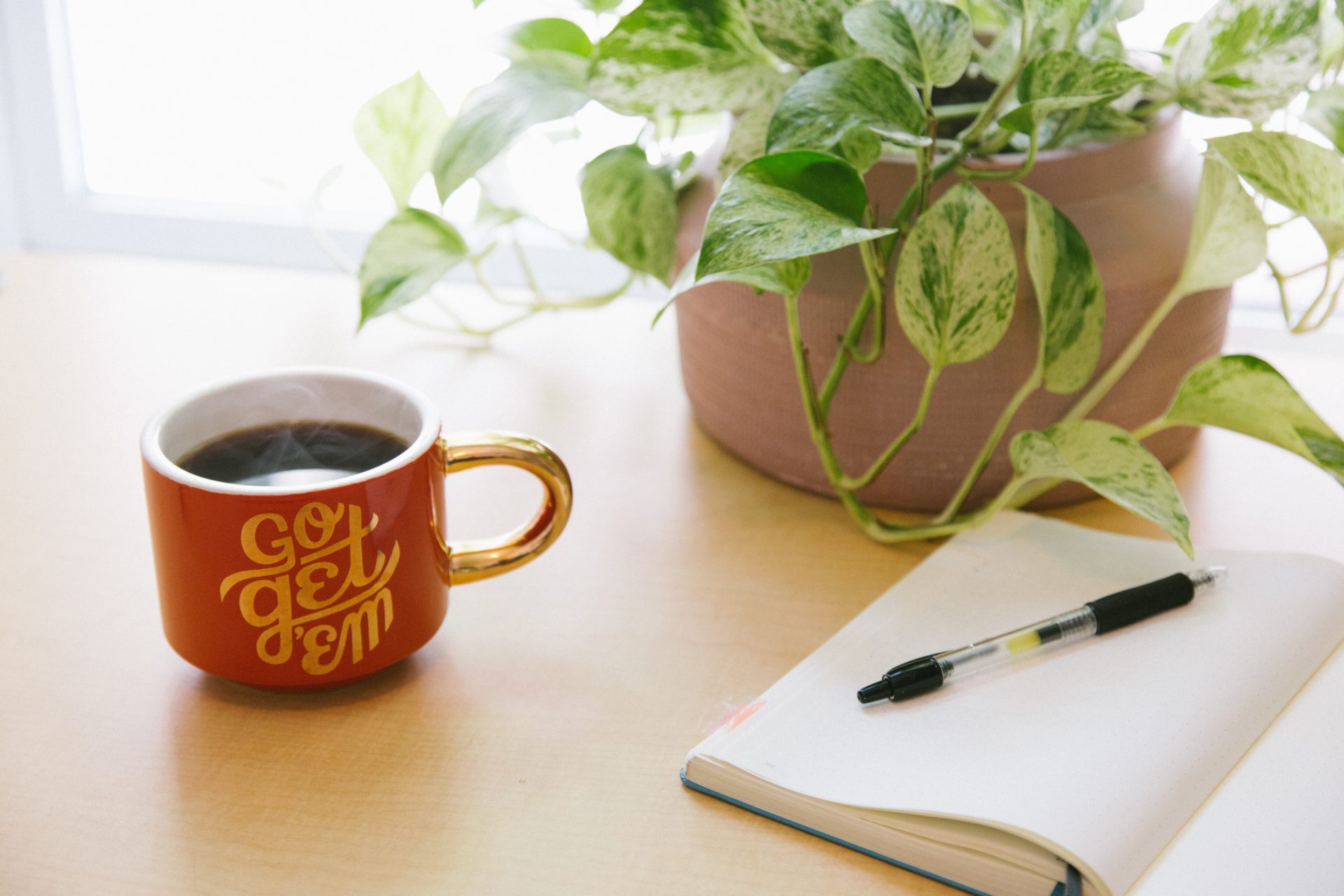 [Note from Frolic: We are so excited to have authors Shayla Black and Lexi Blake guest post on the site today. Take it away ladies!]

I get the question a lot. What’s it like cowriting with another author? More importantly—how do you manage to work with a friend? I write two series with New York Times Bestselling Author Shayla Black and I believe that the Black/Blake brand is different from either of our individual brands. It’s important that there’s a mix of both our styles to create something fresh and new. That’s the whole reason you write with someone else—to make something original. There are a whole lot of author teams out there now and everyone has their own magic formula.

Ours involves alcohol. A lot of alcohol.

The time is the summer of 2011. The place is a small Mexican restaurant in Grapevine, Texas. Shayla and I met every week. Ostensibly this was to talk about our industry and discuss craft. I had only been publishing for a year and a half. Shayla had been in publishing since she was a wee lass of 30. What we both really needed was to see that there was a life outside our computers. Every Friday we would stumble outside our houses, blinking in the light of day. We got in cars that didn’t have a whole lot of mileage and made our way to a place where we could remind ourselves there was a real world. In the beginning we didn’t have any thoughts of cowriting. It was all about connecting with another author. Our jobs can be very solitary and it’s good to find a couple of people who know what you go through. And who love swirl margaritas.

Blame it on the alcohol

So the real story of how we became the dynamic writing duo we are today involves margaritas. We’re sitting in our fave restaurant, the one where they finally started putting us in the back room because many of our professional discussions involved where the third guy in the ménage should go. We’re sipping our swirls and we started talking about how much we loved tropes. You know—secret babies, friends to lovers, arranged marriage and so on. These are the foundations romance is built on and in that moment we thought wouldn’t it be fun to take those tropes and make them super kinky. How would a secret baby book work as a ménage? Could we do it? Combine ménage and BDSM and Harlequin style tropes? 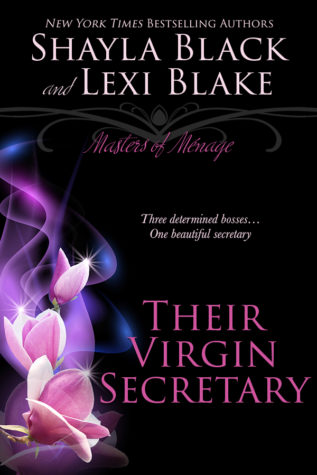 Turns out yes. Yes, we could, and so the Masters of Ménage series was born of our love of tropes, margaritas and spending time together. It wasn’t easy. We had to find our style, the one that showed off the best of each of us. I’m not going to lie and say we didn’t have arguments over how things should go, over how we each handle stress, how we process criticism. But what we found was if we held on, managed to make that boozy lunch every week, we worked it out. We worked it out so well, we forced the New York Times to publish the words Their Virgin Secretary on their best seller list. (Yes, we giggled.)

Fast forward to London two years later. Master of Ménage is set and we’ve just hit the Times. We’re about to get on a cruise ship that will take us and our now suitably well-kept husbands on a tour of Northern Europe. We’re in a swanky hotel in London in the drawing room. We open a bottle of wine. What should we follow up Masters of Ménage with? We’re happy writing our crazy books, but we’re ready for a new challenge. At the time we were both loving the TV show Scandal. We’re ready to do something a little soapy, something complex. Again, can’t remember who said it—it might have been more than one bottle—but one of us said we should do something about these crazy rich guys who have to solve some big conspiracy thing and find love along the way. They’re the Kennedys and the Bushes, the political dynasties of the world. The bad boys. We would set it across the globe. And hey, we laughed, wouldn’t it be cool if the mystery at the heart of the whole series is whether or not the president of the United States might or might not be a Russian asset? We almost didn’t do it because it was so outlandish an idea no one would believe it. Still, we were the crazy people who sold one virgin finding true love with three decidedly non-virgin men, so we could do this, too.

The idea sold within a week and The Perfect Gentlemen were born.

Still drinking after all these years…

So the idea was conceived in the summer of 2013, first published in 2015 and it’s now 2019 and Shayla and I still work together, still drink together, still laugh and cry together. Our original concept went from outlandish to WTH, but we’re so proud of our Perfect Gentlemen because not only does it show off how we write together, it’s also a vision of friendship and how we back each other up.

Cowriting isn’t the easiest thing in the world but if you’ve got a solid base of friendship followed up with a couple of bottles of wine, it can work perfectly.

New York Times bestselling author Lexi Blake lives in North Texas with her husband, three kids, and the laziest rescue dog in the world. Since starting her publishing journey in 2011, she’s sold over two million copies of her books. She likes to find humor in the strangest places and believes in happy endings. 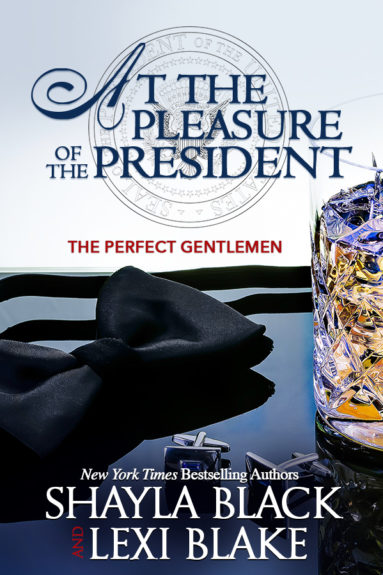 At the Pleasure of the President by Shayla Black and Lexi Black, out April 9th!

When a dangerous conspiracy threatens to tear them apart, he’ll have to choose between his country and the woman he loves…

At the Pleasure of the President, the thrilling conclusion of the twisting, page-turning Perfect Gentlemen series from New York Times bestselling authors Shayla Black and Lexi Blake, is coming April 9th!

Decades ago, ambitious Zack Hayes set his sights on the White House. He’s worked his whole life to become the leader of the free world—attending the right schools, marrying the perfect bride—all to aid his campaign. He didn’t realize someone behind the scenes has been pulling the strings to manipulate Zack and the country he loves into a dangerous position—one he will risk his life to wrench free from. The one thing he can’t risk is Elizabeth Matthews.

From the moment she met Zack Hayes, Liz felt the connection. Serving as his campaign manager and then his press secretary, she accepted that her love for him would remain unrequited. Still, she’d thought they were friends, so when he pushed her aside, she felt the stab in her heart. And when she realizes he’s done it to protect her, nothing will stop Liz from standing by his side—not even the men who would use her as a weapon against him.

As shocking secrets are revealed, Zack and Liz find succor and passion in each other’s arms. When the ultimate villain shows his face, Zack may have to choose between his country and the woman he loves…

Where Romance and Pop Culture Live Happily Ever After.
All Posts
PrevPreviousThe Heart of a Story: Meet Cute by Helena Hunting
NextFrolic went behind the scenes at a romance cover photo shoot and here’s what we learnedNext