Amanda Joy: “Our teen readers are in the midst of recognizing their own power and long to see characters that are just as empowered”

[Note From Frolic: Our resident YA expert Aurora Dominguez got the opportunity to interview author Amanda Joy and ask her five(ish) questions. Amanda’s novel ‘A River of Royal Blood‘ is out Oct 29th!] 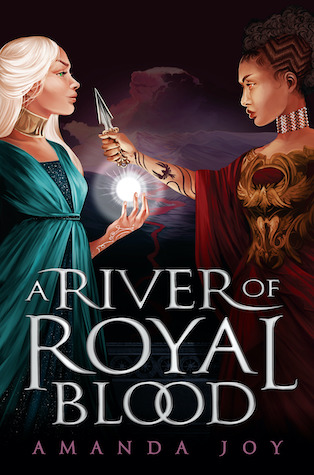 Amanda: A River of Royal Blood was in part inspired by my favorite series, the Wheel of Time. In those books, there’s a character named Tuon who is the daughter of an Empress. She is constantly dodging attempts on her life from her ambitious and murderous siblings. I began to think on what it would do to a person, knowing the family they grew up alongside would one day try to kill them. River is also very deeply influenced by my relationship with my brothers. I’ve always been very competitive with them, though of course fratricide was never on the table.

I related most to Eva in her struggle for self-acceptance; as well as Baccha’s habit of always having something snarky to say, often at the wrong time.

I think especially in YA, our teen readers are in the midst of recognizing their own power and long to see characters that are just as empowered. We also live in a time where there’s lots of disappointment with our systems of power and it’s gratifying to read about characters breaking down oppression in a fantasy world.

A River of Royal Blood follows 16 year old, Eva, a Princess in the Queendom of Myre. In Myre, Queens are chosen, not by birthright, but through a trial of combat—a fight to the death. And though everyone in Myre uses magick, Eva never learned to control hers. When an assassin attacks her months before the fight with her older sister is set to begin, she realizes the only way to survive is to embrace her wicked, violent magick. Eva turns to an ancient fey, Baccha, for lessons in blood and marrow magick. In A River of Royal Blood, you can expect lots of action, sword fights, magick lessons, and swoony romance.

I’m currently working on the sequel to A River of Royal Blood.

My two favorite writers currently are Laini Taylor and Samantha Shannon. Both create such intricate worlds that feel both lived-in and a bit like a dreamscape. And their characters strike the perfect balance of strength and vulnerability.

About A River of Royal Blood:

An enthralling debut perfect for fans of Children of Blood and Bone set in a North African-inspired fantasy world where two sisters must fight to the death to win the crown.

Sixteen-year-old Eva is a princess, born with the magick of blood and marrow–a dark and terrible magick that hasn’t been seen for generations in the vibrant but fractured country of Myre. Its last known practitioner was Queen Raina, who toppled the native khimaer royalty and massacred thousands, including her own sister, eight generations ago, thus beginning the Rival Heir tradition. Living in Raina’s long and dark shadow, Eva must now face her older sister, Isa, in a battle to the death if she hopes to ascend to the Ivory Throne–because in the Queendom of Myre only the strongest, most ruthless rulers survive.

When Eva is attacked by an assassin just weeks before the battle with her sister, she discovers there is more to the attempt on her life than meets the eye–and it isn’t just her sister who wants to see her dead. As tensions escalate, Eva is forced to turn to a fey instructor of mythic proportions and a mysterious and handsome khimaer prince for help in growing her magick into something to fear. Because despite the love she still has for her sister, Eva will have to choose: Isa’s death or her own.

Amanda Joy has an MFA from The New School, and lives in Chicago with her dog Luna. You can find her on twitter and Instagram at @amandajoywrites.

Aurora Dominguez is a high school English teacher, college professor and journalist in South Florida. Her work has appeared in The Miami Herald, Where Magazine and J-14 Magazine, all places where she worked as a writer and editor before going from the newsroom to the classroom. Her favorite days are "Caturdays," which she spends with a good book, her husband, Sebastian, and her cat, Luna. Her motto when it comes to reading: "No book left behind!"
All Posts
PrevPreviousFrolic Original Story: Meet Me Off Camera, Part Six
NextLove YA: Top 3 Y.A. Reads for the Week of October 22nd!Next