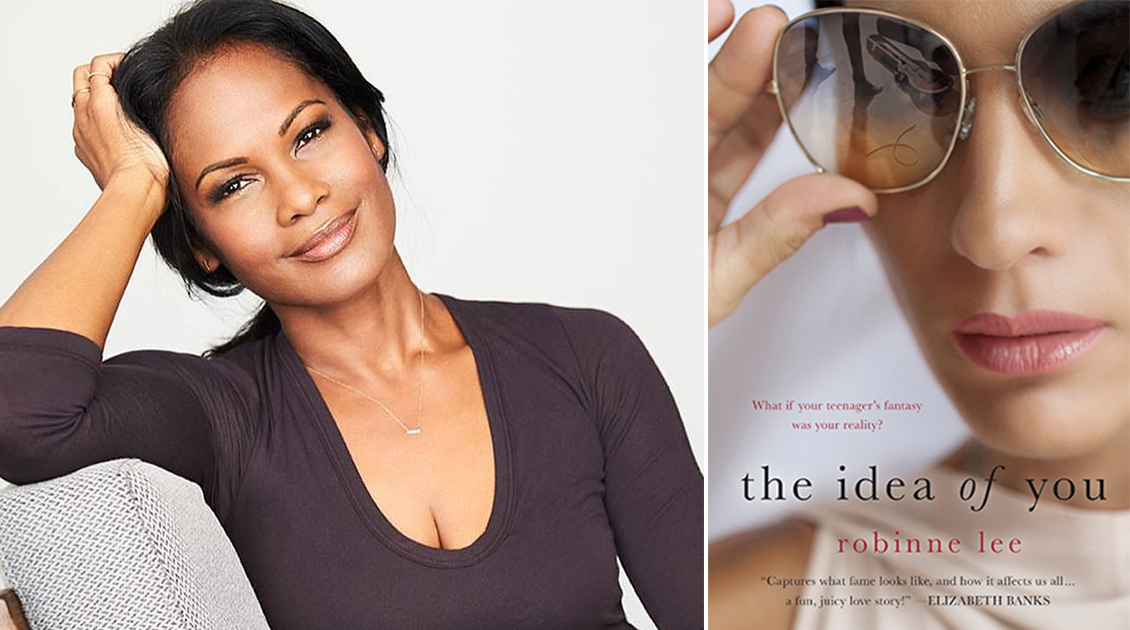 “That would make a great book.”

How many stories start there? Back in 2014, actress, novelist and producer Robinne Lee was home with her children while her husband traveled for business. Surfing YouTube, she stumbled upon a British boy band and its front man, who was beautiful, but obviously comparatively quite young. Down a One Direction rabbit hole Robinne went. She later told her husband she had found the perfect man who happened to be half her age and she would be running away with him. Of course, they both laughed, but he watered a seed maybe Lee didn’t realize had been planted when he said that was funny, and would make a great book.

And The Idea of You, a love story that has taken so many readers by storm over the last year, was born. 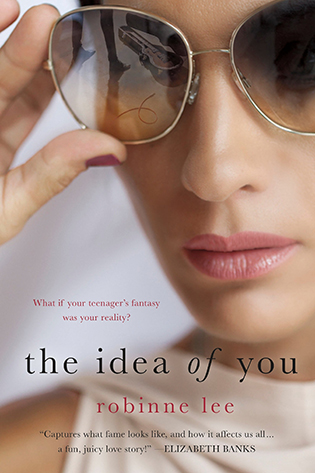 To catch you up, #ICYMI, Lee’s protagonist, Solène Marchand, is an art dealer on the cusp of forty when she meets Hayes Campbell, the charismatic British front man for the biggest boy band in the world August Moon. Despite the twenty-year age gap, they cannot deny the sizzling chemistry, irresistible attraction and undeniable camaraderie between them almost from the beginning. What follows is a global love affair, literally each chapter set in glamorous cities like New York, Hong Kong, Paris, and Miami, that has captured the imagination of so many romance readers and refuses to let go.

Many of the parallels Lee found between her real life and the fictional world she created uniquely qualified her to tell this story. She was close to Solène’s age and used to manage a music group, which put her in contact with New Kids on the Block at the height of their fame. This gave her a front row seat to witness a boy band negotiating enormous worldwide popularity and the grittier side of that level of fame. She’d also traveled extensively, lived all over and had many diverse experiences. The child of Jamaican immigrants, Lee grew up in New York City, and lived in Manahttan for years. Studying abroad at 20 years old, she found herself at the epicenter of high fashion, interning in Elle’s French office, living in Paris and attending Chanel shows between classes.

“I was exposed to all of these experiences when I was very young,” Lee says. “And while I was living it, wrote pages and pages of what that world was like. The smells, sights, textures.”

Lee says those detailed journals laid the foundation for the culturally rich palette that would become the fictional universe of Solène, whose parents are French.

Maybe what most effectively prepared Lee to write this story was her experience as an actress in Hollywood for the last 20 years. You may recognize her as Ros Bailey from the Fifty Shades trilogy, but she has also shared the screen with such big names as Will Smith, Gabrielle Union and many more Hollywood heavy hitters. Maturing in Hollywood has intimately acquainted her with the ageism and sexism inevitably explored in an age-gap story featuring an older woman.

“I think of this book as my mid-life crisis,” Lee says. “I was turning 40 and getting older and feeling like I was running out of time, losing my desirability. My ‘fuckability’. It’s a horrible feeling.”

And one not consigned to Hollywood.

The book deftly explores the double standards culture enables. Older men dating much younger women are virile and lucky. In contrast, older women dating younger men are often portrayed as desperate, pathetic, grasping. Lee said she was careful to never call Solène a cougar because of the negative connotation it carries.

Lee also explores how gender roles, whether culturally-assigned or self-assigned, often disadvantage women. Like Solène, Lee navigates parenting on the West side of L.A. surrounded by wealth, privilege and fame. Solène repeatedly makes decisions for her daughter that her ex-husband Daniel is not forced to make. She has to find “balance” that he isn’t asked to find, a reflection of how often even men with families don’t ask for permission to pursue their ambitions. They just do it, but women are often expected to choose our children, our homes in ways that may slow our ambitions or stunt our success. As women who find themselves in this position read The Idea of You, Lee wants them to extrapolate principles encouraging them in their real lives.

“I want women to know they’re not alone,” Lee says. “It would be nice to not have to be in that positon or to make those choices, but esteeming our kids’ needs is part of our fiber. You don’t want to see them suffer. You feel the need to protect them at a chemical level. It’s a bond we don’t escape.”

At the same time, Lee believes we shouldn’t have to reconcile our ambitions with those instincts and responsibilities at the cost of our dreams.

“I want there to be a way for us to pursue what we want to do,” Lee says. “Our dreams, hobbies, goals. Doing those things makes you a better person, a better parent and less resentful.”

That so many women who read The Idea of You walk away from Solène’s story feeling that way, asking those questions, and challenged to reexamine what aging means and looks like, is a testament of Lee’s insightful storytelling. Her experience as an actress and a writer intersect beautifully in this project.

“Film was always something that could touch me in my soul,” Lee says. “As an actress, I know how those performances can reach me and touch me and make me feel. I want other people to feel that way. I feel that way about great books. I’ve always wanted to touch people in the way great storytelling can, whether it’s through film or books.” 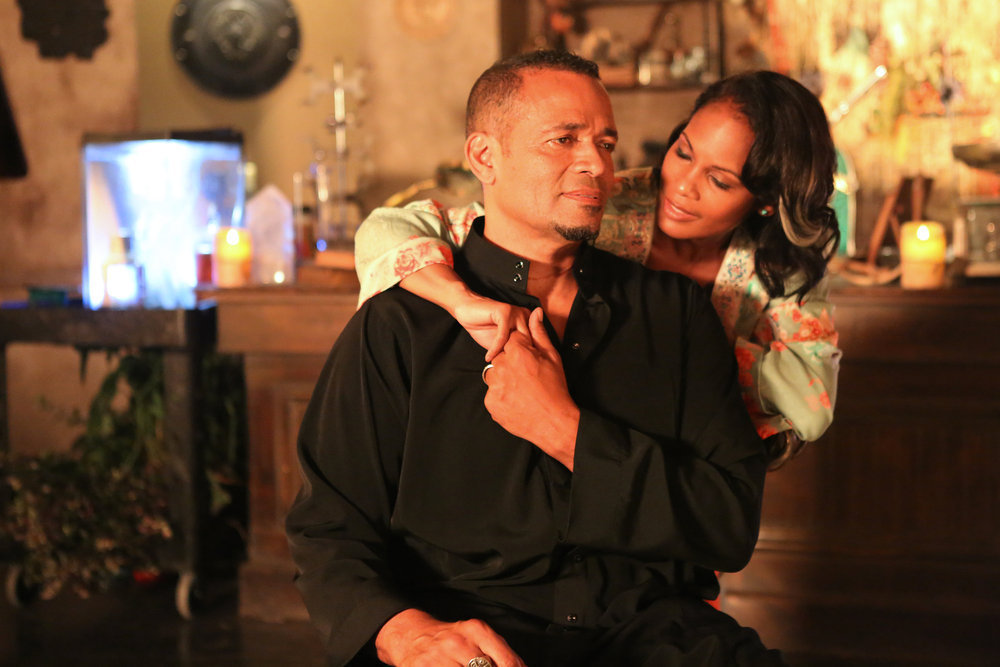 “Acting is really about putting yourself in someone else’s shoes, which is also a lot of what writing is,” she explains. “Acting is inhabiting those shoes physically and allowing it to affect you emotionally. There is a kind of thrill in being able to fully inhabit someone else’s being, but you’re also aware you’re bringing the writer’s words to fruition. And the director’s vison.”

In contrast, Lee sees writing a novel as a much less collaborative, but no less rewarding, experience.

“Writing can be very isolating,” she says. “I don’t need collaboration when I’m writing. Sometimes I want feedback, like maybe I feed a few chapters to my sister, but she doesn’t read it very critically. That is enough collaboration when I’m starting. It’s a whole other animal when my group of writers and my editor get involved.”

Lee says acting is so collaborative, you also don’t feel like you can take full credit for it. “When someone says they loved my book,” Lee says. “That is all me. I feel very exposed, naked allowing someone to look into my mind and into my soul.” 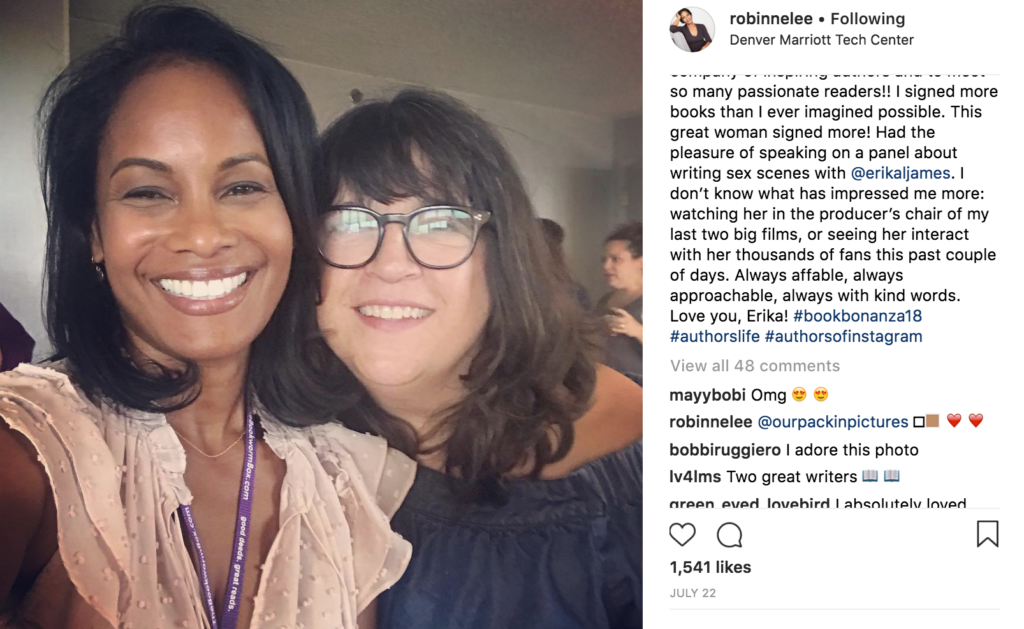 Last month at Colleen Hoover’s convention, Book Bonanza in Denver, Colorado, Lee experienced what she calls a surreal intersection of her two creative worlds. The Idea of You released between the two films in which she played Ros, Fifty Shades Darker and Fifty Shades Freed. Fifty Shades author E.L. James was signing at Book Bonanaza, and they even served on a panel together. Lee got to see the readership fandom firsthand that spawned the films.

“The cool thing is that [E.L. James] is very much what you see is what you get,” Lee says. “She’s consistent. Super kind, lovely, approachable, affable and friendly. She was that way as producer on set, and she’s that way with her readers and fans. She’s that way with fellow authors. It’s inspiring to see how she has created a relationship with her fans and maintained that, and amazing how this trilogy has brought all these people together.”

Lee says she was so inspired by how the Fifty fandom embraced her as the character Ros, considering it was such a dramatic departure from the physical depiction in the books. Lee is a black woman, and in the books Ros is a white woman with red hair. Robinne wasn’t sure if she should brace herself for the kind of racist backlash Amandla Stenbeg experienced when cast as Rue in Hunger Games. In contrast, the Fifty Shades fandom was accepting and loving and wholly embraced Lee.

“It’s hard to walk into a project so well-loved and well-known, and have fans feeling like that isn’t who I saw her as. They totally eased all my anxieties.”

As for writing in the romance genre herself, Lee doesn’t think she does, and never set out to write a romance.

“The Idea of You is a love story,” Lee insists. “Not a romance.”

Many romance readers didn’t get that memo, or don’t make that distinction. We love our HEAs, and not to be all spoiler-y, but Lee doesn’t tie up her novel with a neat formulaic bow. And yet, more romance readers every day find themselves drawn into the rich, dimensional world Lee crafts as the backdrop for a once-in-a-lifetime love between two people separated by a generation and the barriers culture erects to keep them apart.

One of the greatest things about romance is how it plants women at the center of the story; their desires, their happiness, their fulfillment. While The Idea of You may stretch the genre expectations and boundaries, it does all of these things exceptionally, examining how a woman of a “certain age” bravely navigates her path, pursues her ambitions with confidence, self-awareness, and intelligence while discovering what is most important and who she actually is, beyond the expectations culture might impose.

Whether you call it romance or a love story, whether Lee is acting or writing, she displays the best of storytelling that firmly places women where they should be.

In charge of their own destiny. 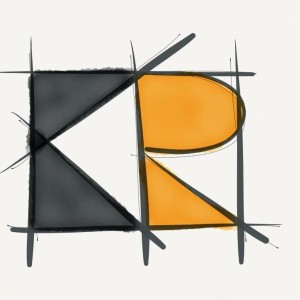 Kennedy Ryan, a Top 40 Amazon Bestseller, writes romance about remarkable women who thrive even in tough times, the love they find, and the men who cherish them. Kennedy's writings have appeared in Modern Mom Magazine, Chicken Soup for the Soul, USA Today and many others. The founder and executive director of a foundation serving Georgia families living with Autism, she has appeared on Headline News, Montel Williams, NPR and other media outlets as an autism advocate.
All Posts
PrevPreviousVillains To Lovers: How Bad Are The Bad Guys, Really?
NextShould You Try This Scene At Home? Erotica Author Elia Winters Tackles ThreesomesNext