Back On The Emotional Rollercoaster: Supernatural’s First Four Episodes of Season 15

Supernatural kicked off its fifteenth and final season with a three-part opener of sorts and then a standalone episode, all of which took fans on what is by now a familiar roller coaster ride. The first two episodes were uneven, and the second definitely not one of my favorites, but all had a mix of emotional moments that were memorable. Some made me laugh, some made me grind my teeth, and some made me cry – but that’s what I love about this Show. Here are some of the most memorable emotional moments so far in Season 15.

The premiere episode ended with the perfect set up for the final season – a call back to the last scene of the very first episode which had every fan reaching for the tissues and overcome with nostalgia. Sam and Dean stand at the Impala’s trunk, Dean insisting that he fix his brother up as he has so many countless times over the decades despite Sam’s protests. The small moments in the brothers’ lives are things I treasure, glimpses of their everyday lives that we rarely get. Sam winces as Dean dabs at the “God gun” wound on Sam’s shoulder.

Dean: Remember when we were little? I’d try to distract you when I was ripping off a bandaid.

Dean holds the alcohol pad to the wound at that moment, beaming as Sam winces because some things never change.

Dean (grinning): Still got it.

He’s all big brother proud, doing what has defined his life for most of his life – taking care of his little brother. Because their relationship is more equal now, Sam also gets to take care of Dean, not physically but psychologically. When Dean expresses hopelessness about being rats stuck in Chuck’s maze, Sam insists that their lives do have meaning, that they still saved people – and that now that Chuck seems to be gone, they’re free.

Dean: So, you and me versus every soul in hell. I like those odds.

Dean and Sam lean over the open trunk, our perspective as viewers looking up at the brothers. It’s a scene that’s instantly familiar to any fan, and we know what’s coming next.

Dean: Well, you know what that means. We got work to do.

For a second, we get a flashback to the identical iconic scene in the pilot, the way that episode ended – and began this fifteen year incredible journey.

That scene literally gave me goosebumps.

Honorable mention in the premiere episode for Alex Calvert’s new character the sassy demon Belphagor, who brought much needed comic relief to a pretty stressful and dark episode.

The second episode of the season didn’t work very well for me. The zombie ghosts running up and down a brightly hit suburban housing development in mid afternoon was more laughable than scary, and the episode was so crowded with returning characters that none of the returns had the emotional impact they should have. Emily Swallow returned as Chuck’s sister Amara (with a snazzy new wardrobe and attitude), David Haydn Jones returned as Arthur Ketch (also with a snazzy wardrobe but a redemption arc that not all fans bought into) and Osric Chau returned as Kevin Tran. Of the three returns, Kevin’s reappearance was the one that made me genuinely emotional, but it could have been much more. I hated the reveal that Kevin wasn’t sent to Heaven after all, and after he heroically tries to help the Winchesters out, he opts to stay in this world albeit as a rather dejected looking ghost. Kevin Tran is one of my favorite characters, and watching the Winchesters sadly wave goodbye to him broke my heart. I’m hoping we haven’t seen the last of Osric and Kevin.

The season’s third episode pulled no punches as far as ripping our collective hearts out and stomping on them, thanks to a powerful script by Robert Berens and some top notch acting. Ruth Connell returned as Rowena in the prior episode, and in ‘The Rupture’ she becomes fully the ally the Winchesters and Castiel need. Initially optimistic about her spell being able to seal the rupture and save the world, Rowena quickly realizes that it won’t work once Castiel has to kill a power-hungry Belphagor. In a moment of quiet heroism, Rowena decides to make the ultimate sacrifice – not so much to save people she cares about (though we know she does) but because she believes profoundly in magic and knows this will work. We’ve known for some time that it’s prophesied that Sam is the one who will kill Rowena, and that comes true here, in a scene that left me sobbing.

Jared Padalecki and Ruth Connell were out of this world amazing in their intimate dance so full of desperation and determination.

Rowena: Yes, Samuel. To perform the spell, I have to die. And it has to be you who kills me.

Sam still says no, looking distraught at the thought of taking her life, trying to pull the knife away as both their hands grip the handle. In a moment that Ruth Connell shared was Jared’s idea, Rowena lays her hand on Sam’s cheek, gently reassuring.

Rowena:  I know we’ve gotten quite fond of each other. But will you let the world die — let your brother die — just so I can live?

Sam leans in and murmurs “No”…. and for a moment we think he’s refusing, then he pulls her into a hug and we realize he’s done it, tears streaming down his face.

Rowena grabs his chin, stabs the knife in deeper and twists it brutally, ensuring that she will die.

There’s another lovely scene of Dean trying to console Sam, and Ketch makes the ultimate sacrifice in this episode too, giving his heart (literally) for the Winchesters. And then there’s another highly emotional scene, just in case fans’ hearts were not already torn apart and stomped to death.

Castiel and Dean, who have been at odds for the last few episodes (ever since Jack killed Mary, which in Supernatural time was about a week and a half ago), face off in the library.

Dean (coldly): You’re sorry. Why didn’t you just stick to the damn plan?

Cas: The plan changed. Something went wrong, you know this. Something always goes wrong.

Dean: Yeah and why does that something always seem to be you?

Castiel is clearly wounded, pointing out that Dean no longer trusts him and in fact can barely look at him.

Cas: I’ve tried to talk to you, over and over, and you don’t want to hear it. I’m dead to you. You still blame me for Mary. 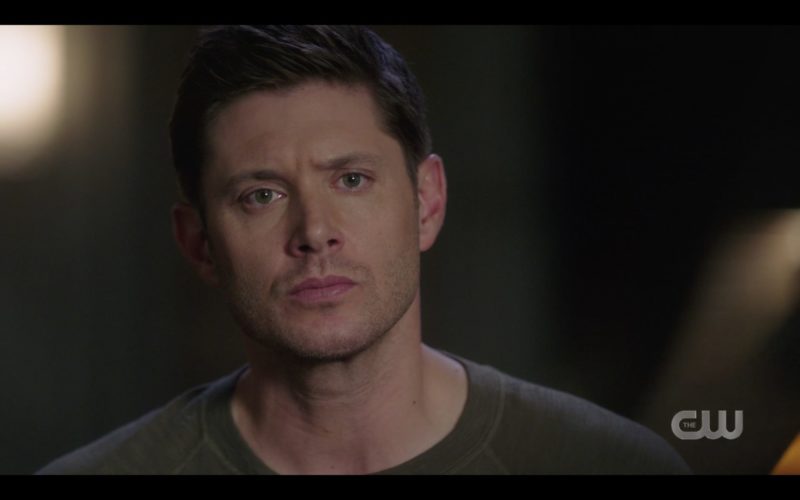 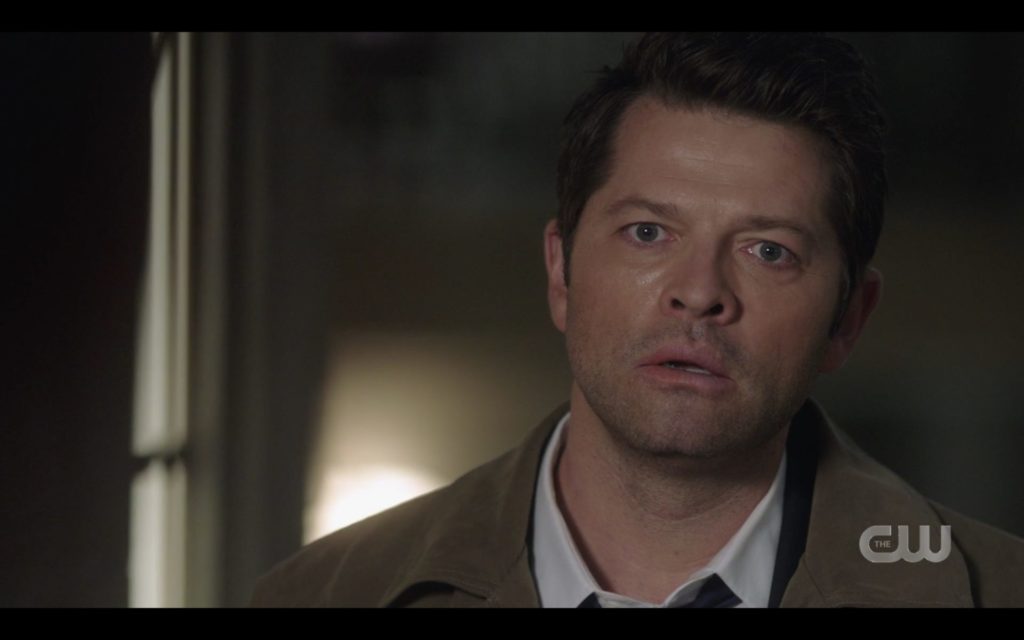 Cas: Jack’s dead, Chuck’s gone, you and Sam have each other. I think it’s time for me to move on.

If you happened to ship Dean and Cas, that was a devastating break up scene. If you see them as friends, it was an equally heartbreaking falling out. Tissues, anyone?

That brings us to episode four, Atomic Monsters, written by Davy Perez and directed by Jensen Ackles himself. I loved this entire episode, which had multiple stand out emotional moments. The beginning sequence was BAMF Dean fighting his way through the bunker, filmed like he’s John Wick and pretty much setting the entire fandom on fire.

Then we had the return of Becky Rosen, avatar of fangirls everywhere. She was last seen as the character was ruined (in my humble opinion) by turning her into a pathetic abusive stalker, so I was happy to see her back as a well adjusted successful woman whose life is fulfilling and is still a fan, and who doesn’t need Chuck when he returns. Warm feelings result for most of the Becky scenes, until she tells Chuck just a little too much truth and he zaps her and her entire family out of existence – or at least out of this existence.

The scene which really stood out emotionally in Atomic Monsters, though, was the final scene of Sam and Dean. The brothers are in the Impala, driving at night like they so often were in the early seasons. Sam is overwhelmed with grief and loss and falling into hopelessness after the deaths of his mother and Jack and having to kill Rowena – and his terror of killing his brother after the vision he had at the start of the episode. As the brothers often do, when one is down the other swoops in to pull him up, and Dean tries. It’s a testament to how far their relationship has come that he doesn’t try to talk Sam out of his feelings, though. He listens, he encourages, but he also hears Sam when Sam says he’s not okay.

My heart breaks for them in that moment, knowing how much they’ve been through. Hearing Dean so determined to keep trying, willing to sacrifice so that others could live and be happy.

What Sam says in this scene rang very true to many fans who have dealt with their own real life challenges of hopelessness and helplessness and depression.

Even in moments like this one, Supernatural is quietly, realistically inspiring. The ‘Always Keep Fighting’ message came through loud and clear.

And now it’s on to Episode 5. We know there’s a long hiatus after January and then the show moves to Mondays for its final months, ending on May 18. That gives me a little time to get prepared for more of what I’m sure will be a continuing emotional rollercoaster. I’ve stocked up on tissues for the remaining 15 episodes of the season, because if the first four are any indication, I’m going to need them!

Lynn Zubernis PhD is a psychologist and university professor who has published many books about fandom and fan psychology and why it’s healthy and positive and just plain fun to be passionate about the things we love. Her most recent books, There’ll Be Peace When You Are Done: Actors and Fans Celebrate the Legacy of Supernatural, and Family Don’t End With Blood: Cast and Fans on How Supernatural Changed Lives, have powerful chapters contributed by the actors and the fans of Supernatural, the show she’s passionate about. You can also go behind the scenes of that show and explore the ins and outs (so to speak) of fanfiction and fandom in her book Fangasm Supernatural Fangirls.
All Posts
PrevPrevious#TBT: Beautiful Bastards From 2013
NextChristmas Wish List: Feel Good RomanceNext