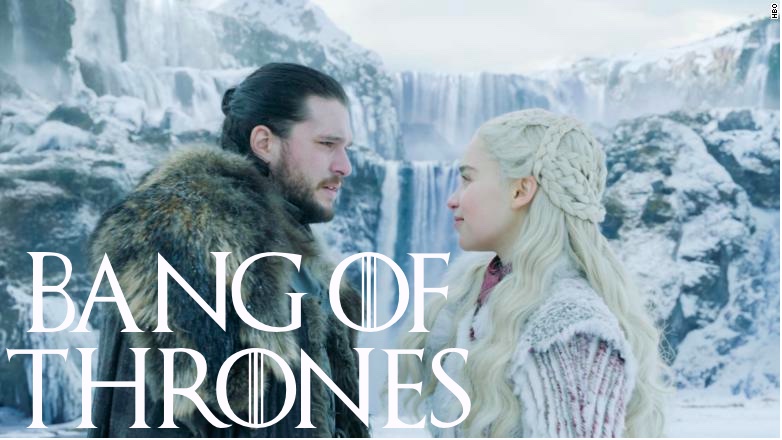 Game of Thrones has returned. It’s back. Winter is here. There’s a lot for the show to wrap up in just! six! episodes! But I’m here to talk about one thing and one thing only:

Or, you know, sexual tension.

Or just straight up sex.

I’m here to talk about ships.

Before we go any farther, I’d like to make it very, very, very clear: THIS CONTAINS SPOILERS UP THROUGH SEASON 8, EPISODE 1.

Now, I’m the sort of person who sees two characters look at each other for slightly too long and goes, “AH…LOVE!” whether there’s any other supporting evidence or not. I’m also not loyal, at all, to any one ship.

For the purposes of these posts, I will try to keep my dirty dirty noncanonical multishipper ways out of it and stick to what the show is actually supporting.

Let’s start with Jon and Daenerys, who take up most of the screentime this episode:

When I watched season 7 the first time, I didn’t get it at all. They’re both beautiful and I love them both, but it seemed as rushed as everything else that season.

And it is! But on a rewatch, they got me. It’s the way Dany looks like her heart just got ripped out when Jon volunteers to go North to get a wight. It’s her realizing, all at once, that she doesn’t want him to go.

…Yes, that scene was also the one affirming how super related they are and how Jon’s the true heir to the Iron Throne, and all of that makes it very awkward. Can’t deny that.

Going into this season premiere, they don’t know about the whole incest thing or Jon being the rightful heir to the throne Dany’s been chasing for years. They get to be happy. They look so good together. They get to race while flying dragons.

They get to make out while being watched by dragons, because I guess dragons are just like any other pet: Creepy voyeurs that you wish would get out of the bedroom.

Sansa can tell that Jon loves Dany. Davos, Tyrion, and Varys discuss the possibility of marrying them to each other to unite the Seven Kingdoms. This ship could sail so strong and so true…

…but the incest. Dammit. Which, btw, Jon finds out about this episode! Sure, after Sam tells him who his father is, he mainly focuses on the whole “Ned Stark isn’t my father?” and “I’m the heir to the Iron Throne?”, but the look on his face when Sam says, “Your real father was Rhaegar Targaryen” is 100% “oh god I fucked my aunt”.

I don’t know what to do about that either, Jon.

I’m curious to see if Jon tells Dany, and how long it takes. Jon’s an honorable boy. He couldn’t even lie for two seconds to Cersei and bend the fake knee because he’d already bent it to another queen. He risked everything on telling the truth because, well, maybe he’s not Ned Stark’s son, but he’s super Ned Stark’s son.

So, are we going to see that in the next episode? Is Jon going to come right out and tell her? How do you tell someone you’ve been sleeping with that she’s your aunt and you have a more rightful claim to her throne than she does? Or will he take after his father in another way, and continue hiding his identity?

I’m lowkey really stressed about this.

I wasn’t lying about Jon and Dany taking up most of the screentime and this post. I can get everyone else in bullet points.

Now if you’ll excuse me, I’ll be somewhere screaming into a pillow until next week because the Army of the Dead is way too close and I’m really worried about all of my precious children.

Sarah Hollowell is a fat Hoosier writer working to up the magic quotient of Indiana. She's been published on Huffington Post, Fireside Fiction, and Apex, among others. She spends most of her time binging podcasts and needle felting characters from Animal Crossing.
All Posts
PrevPreviousExclusive Excerpt: ‘The Austen Playbook’ by Lucy Parker
NextMixtape Kind of Love: Musically Inspired RomancesNext