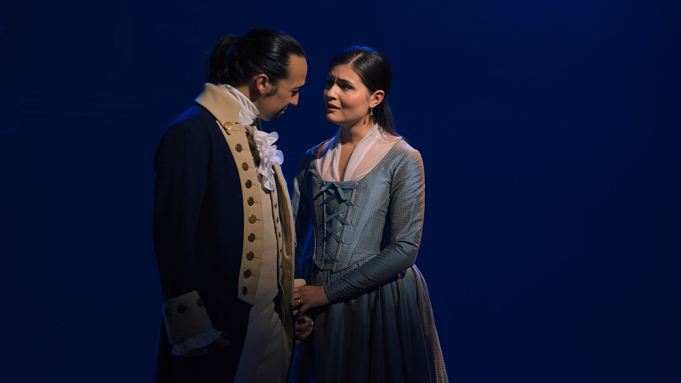 Well, Hamilton’s here! Over the Fourth of July weekend, it seems like pretty much everyone’s social media feeds were filled with reactions, live-tweets, criticisms, and of course numerous gifs of the performance.

So, here are some of the major takeaways from the Hamilton film debut on Disney Plus.

First Thing’s First: The Drool Seen Round the World

Sure, it’s not the most important part of the incredible original cast production of Hamilton. But the drool and spittle from King George III as played by Johnathan Groff is certainly one of the most meme-able things to come out of Hamilton’s wide release.

As Groff reaches the climax of the restrained-yet-unhinged tune, “You’ll Be Back,” a truly profound amount of spittle leaves his mouth and just…stays there…taunting the viewer on his upsettingly soggy bottom lip.

“Wipe your mouth!” We all longed to scream at the television. But of course Groff’s King George won’t. He waits on servants to do that for him.

The entire cast of Hamilton shows up putting their best foot forward, so it’s hard to single out any “best” performances.

That said, I always had a goofy grin on my face when Daveed Diggs and Okieriete Onaodowan were on the stage. In Act I, they play the parts of Lafayette and Hercules Mulligan. They start the show by charming the audience and making jokes. By the end of Act I they’re spitting raps that rally the troops as the end of the American Revolution draws near.

Act II sees them taking on the parts of Thomas Jefferson and James Madison. This is when their comedy chops get to shine as Diggs plays a larger-than-life Jefferson and Onaodowan follows as the reserved, ever-faithful Madison. The two of them seem to be having a blast in their roles, which in turn makes the whole show feel more fun.

When “Satisfied” Was Beyond Satisfying

Perhaps the number that was most amazing to witness, even above show-stoppers like “My Shot” and “The Room Where It Happens,” was Renèe Elise Goldsberry’s stunning performance of “Satisfied.”

As Angelica, Hamilton’s new sister-in-law, Goldsberry remembers the bittersweet night they first met. One reason this song is such a smashing success is the staging. The film’s director mashes up the camera angles above, at level with, and on the stage to capture the dizziness of Angelica’s feelings and memory. Add that to the already mind-blowing staging that shows us a reversed and re-played version of the scene we’ve just watched of Hamilton meeting the Schuyler sisters, and it packs a gigantic emotional punch.

Oh, and Goldsberry is a legit STAR. After watching this number, I turned to my husband and  described her singing style as “dropping her jaw and unleashing a verified wind tunnel of sound.” Her gigantic voice and schooled facial expression make this one of the most memorable parts of the filmed Hamilton performance!

As with any popular piece of media, it’s important to watch with a critical eye. Hamilton is no different. From mainstream news sources and casual internet observers alike, Hamilton has become subject to critiques about its use of people of color to tell the stories of our incredibly flawed and incredibly white founding fathers.

And about those founding fathers…there’s another school of criticism about how the women of Hamilton are written and used in the service of masculine stories.

As you can probably tell, I am willing to engage with these critiques without chucking out the entirety of Hamilton.  As Frolic podcaster Erin Leafe said on Twitter, “Loving all the #HamiltonFilm criticisms, a show with the refrain ‘Who lives, who dies, who tells your story?’ inviting the audience to continuously examine who is benefiting, or losing in this narrative? It is the best way to examine any text. Why this? Why now?”

If you’re one who wishes the focus or execution of Hamilton could be different, can I plug the romance novella trilogy Hamilton’s Battalion? The novellas in this collection feature characters of various races, sexualities, ethnicities, and religious identities in romances that revolve around Hamilton and the Battle of Yorktown.

#HamiltonFilm Captures The Intimacy and Immensity of Theater

I was lucky to see a touring production of Hamilton about one year ago. Seated in the Mezzanine, I was able to see the full scope of the bare stage, the precise choreography, and the superb lighting design. The widest shots captured by the camera in this filmed performance portray something more like the view I had when I saw the show in person.

But so much of the production is filmed up-close and gives us a glimpse at the show only those of us with crap-loads of cash or luck at the ticket lottery could have ever experienced in person: the intimate look at the actors’ faces as they portray each of their characters.

Here’s just a short list of some of the best things that the filmed version of Hamilton helped me notice and appreciate for the first time:

*The little look Leslie Odom Jr. gives the audience during “Nonstop” when he turns around in his chair, as though to say, “can you believe this guy?”

*One of the ensemble members climbs out of the orchestra pit to start Act II!

*The way Lafayette seems to whisper something suggestive or surprising that makes Peggy blush during the wedding procession for Hamilton and Eliza.

*The way Jasmine Cephas Jones, who plays Hamilton’s mistress in Act II, is used in the staging of Hamilton’s memories of his mother during a life-changing hurricane.

*Jefferson’s “wait, who are you? Why are you here?” expression as Burr confidently struts in to start singing “Washington on Your Side.”

*And who could forget the absolute cuteness of Hamilton’s “I was chosen for the constitutional convention” squeal?!

Of course, the filmed performance isn’t the perfect representation of going to the theater. As someone who grew up going to and performing in theatrical productions, I believe nothing can replace the buzz of anticipation as the lights dim, the electricity of knowing this is really happening in front of you, and the papery smell of hundreds of programs being flipped through during intermission.

But the premiere of the Hamilton film gave us all the closest thing we could hope for in these times, when a pandemic, racial injustice, and economic fears have turned our world upside down. We may not have shared the physical space of a theater or concert hall, but the Fourth of July 2020 involved thousands upon thousands of people sharing an experience in a magical way.

I’ve only scratched the surface of what’s worth covering about the Hamilton film—what did you come away from it considering? Are there any new favorite parts or songs? Or things you didn’t like as much as you thought you would? Share with @onfrolic online, and keep that lovely communal cultural experience going!

Erin Phelps is a lover of swoony romance novels, superb television and movies, and splendid comedic podcasts! In addition to writing for Frolic, Erin works at a fun customer service-oriented job at a salon. Sometimes, she can even be found teaching Women’s and Gender Studies at her local college! Her love language is well-constructed pop culture references and her favorite treat is a caramel latte.
All Posts
PrevPreviousComics and Chatter with Laurie Halse Anderson!
Next5 Unique Bookstagrammers to Add to Your Feed ASAPNext