Book of the Week: A Snowy Little Christmas: Missing Christmas by Kate Clayborn

A Snowy Little Christmas is an anthology of three Christmas stories: “Starry Night” by Fern Michaels, “Mistletoe and Mimosas” by Tara Sheets and “Missing Christmas” by Kate Clayborn. In this piece, I’m reviewing Kate Clayborn’s novella. 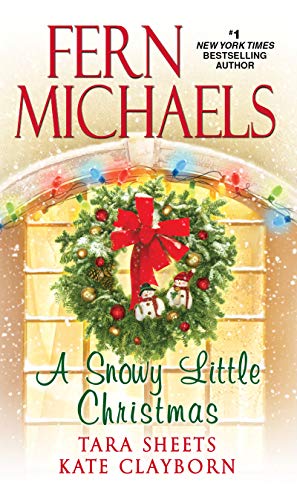 Jasper has been working very closely with Kristen for years, spending hours of time in her company at work, outside work, and while traveling for work. But in all this time, he misses her keenly. They are close, but as work confidantes and friends — just not the kind of closeness he desperately seeks. He is a stickler for rules, and one of the rules is no personal emotions muddying up professional relationships. Besides, she isn’t interested in him that way. And there is no way he would ever jeopardize having her in his life in whatever guise possible by attempting to romance her. He would never survive the loss were she to go away.

Little does Jasper know, Kristen has likewise buried her attraction and affection for him under layers upon layers of professionalism. She values how close and in sync they are, how they can communicate silently through body language, and almost read each other’s thoughts where work is concerned. And yet, where Jasper’s personal emotions go, she draws a blank.

Finally one day, elated after a spectacular win at work and frustrated from holding back her attraction for Jasper, she demands almost questioningly that he kiss her. And despite his habit of restraint, despite his misgivings, despite the warning bells tolling in his head about romancing her…he does!

And life changes. For them both. What are they to do?

Jasper has become so accustomed to hiding his love for Kristen because he is so afraid of losing her if it goes wrong. He is so tired of keeping this burdensome secret. If only, he could stop being so afraid and step forward with courage to venture into the uncharted territory of a romance with her. And then…he does. And she does, too.

Clayborn is such a skilled writer. She writes the minutest of emotional nuances with such sensitivity. Jasper and Kristen are beautifully complex characters thanks to her carefully handling. She doesn’t hurry Jasper through his conquering of his fear — she allows him take his time. She also gives Kristen the patience to await Jasper’s bold new step with anticipation and allow herself the space to feel his love for her and her love for him.

There are brave steps and some scared step-backs from both of them, each hesitant of the other’s feeling every step of the way. Falling in love takes such audacity and such wholehearted vulnerability, that for people who are used to shielding their tender heart, it can become an instinctive shying away. Watching Jasper and Kristen pluck up their courage and reach for happiness is a joy to read.

Other than the marvelous characterization and deft plotting, there is Clayborn’s poetic prose.

I grew up on the west side of the Upper Peninsula [of Michigan], which means I know snow. I know the sound of its silence outside, the muffled quality to the air, even when you’re inside. I know the way the light changes, where it’s gray or sunny. I even know the smell of it when it’s freshly fallen.

If you’ll read one Christmas story this year, make it this one.

Keira Soleore writes for the International Examiner and Cogitations & Meditations. She enjoys connecting with readers on Twitter (@keirasoleore) and through her website (www.keirasoleore.com). Her interests include medieval manuscripts, philosophy, poetry, picture books, choir, sunshine and beaches. Keira is a pseudonym.
All Posts
PrevPreviousThe Gospel According to Fleabag: The Scriptures
NextMY AHA MOMENT! Non-Reader to Book BelieverNext