Book of the Week: A Study in Scandal by Caroline Linden

Caroline Linden’s books are distinguished for their fascinating character work, and A Study in Scandal is no different. 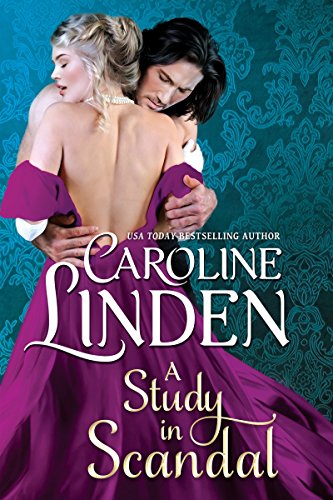 Lady Samantha Lennox is under great duress in her father’s home. The earl’s cruelty towards his family knows no bounds, and he nitpicks every tiny detail of her life, expecting perfection and exacting retribution. That is why she is in abject despair, but determined, to confess that she stole money from him and lied to him about it for seven years. His revenge is swift and unnerving: She is to marry one of the most profligate, immoral and barbarous of men.

This decree at last snaps her out of lifelong apathy, and she flees to her brother in London. Unfortunately, as the reader has probably predicted, her innocent self runs into confidence men the minute she steps down from the coach and is about to be kidnapped, when out of the blue, someone strong and kind is determined to save her, going so far as to wade into the Thames to fish her out.

Lord George Churchill-Grayson “Gray” has modest rooms in a modest part of London where he earns his living painting. No one would guess he is the son of a duke, because he puts on no airs, but neither is he estranged from his family. His father is by turns bemused and proud of his son’s artistry and vehemently supports his right to paint and make a name for himself.

When Gray takes Samantha to his landlady to be taken care of, she is beyond grateful to be rescued. He only wants what is best for her, which is to restore her to her family, but Samantha is determined to return to her father’s home without having her father’s wrath fall on this generous-hearted man. So she refuses to say who she is and tries to leave, but her nerve fails her when it actually comes to leaving.

By this time, Gray is helplessly fascinated by her and offers her his rooms to stay in without restriction. She is safe, under his protection, and there is no compulsion for her to be a certain way, say certain words, or do certain things. Can you imagine what freedom that must’ve been for a girl raised in confined circumstances at the whim of an inhumanly cold man?

Linden does a wonderful job showing how Samantha warms to Gray’s acceptance and gentleness: tentatively, at first like she can’t quite believe it, then with growing confidence. She starts making a mark in his life while also being useful — earning her keep, so to speak. Having a job to do and the satisfaction that comes from having done it well brings with it an upswell of self-respect that starts to dispel some of her father’s negative programming.

In the meantime, Gray finds that the lonely life of a painter is banished with Samantha’s presence. She has a calming, and yet artistically energizing, effect on him: like all nerves are firing at the same time. His painting takes a passionate turn even as his artistry expands.

What Linden neatly sidesteps is the “gratitude leading directly to love” cliché. By having Samantha stand on her own feet and become a self-confident, loving person allows Linden to show Samantha meeting Gray on an equal footing.  At the same time, Linden also sidesteps the “passionate artist equals passionate lover” trope. He is his own man, capable of great art and capable of great affection, and one has nothing to do with the other. People are complex beings with the ability to do many things well — there isn’t just one defining characteristic.

I was delighted to note that the hero’s father is very much alive and that the hero has no quibbles about asking for his help. Usually in romance fiction, in order to make the hero more heroic, alpha, in charge, titled, what-have-you, fathers are killed off — as if a man cannot become fully a man until his father is dead. This book turns that notion on its head. Not only is Gray a decent man — kind, hardworking, and very much in charge of his own life — he is heroic in his rescue and defense of Samantha and loving in his care of her. Despite his father being a powerhouse among his peers, in his family life, he is an affectionate father, and he helps Gray without belittling or infantilizing him. And Gray accepts his help without feeling small. Thus, Gray retains his heroism while being a part of a loving family.

Like I said at the beginning of this review, Linden does fascinating character studies. In an otherwise quiet book, the emotional depth of the story comes from the characters and their personalities. When emotion is innate to the characters, it feels organically authentic to the reader and allows the reader to connect deeply to the story. For many historical romance readers, Linden is an auto-buy author, and you can see why.

Keira Soleore writes for the International Examiner and Cogitations & Meditations. She enjoys connecting with readers on Twitter (@keirasoleore) and through her website (www.keirasoleore.com). Her interests include medieval manuscripts, philosophy, poetry, picture books, choir, sunshine and beaches. Keira is a pseudonym.
All Posts
PrevPreviousTrope Rec Tuesday: Get to Know These Romance Silver Foxes
NextExclusive Excerpt: Highland Jewel by May McGoldrickNext