Book of the Week: A Sweet Mess by Jayci Lee

In A Sweet Mess, Jayci Lee brings together two Korean-American protagonists who have combustible chemistry with each other that eventually deepens into an abiding love. Lee’s skill as a writer is bringing her characters fully formed to life right from the beginning. 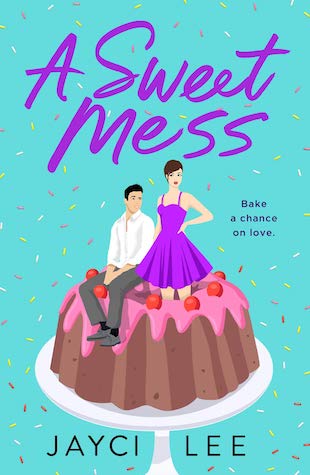 Aubrey Choi is a talented baker who puts her heart and soul into her work, even caring for her youngest clients’ birthday cakes. Her small Comfort Zone bakery is set in Weldon in the foothills of the Sierra Nevada. Aubrey’s business is enthusiastically supported by the locals but kept afloat mainly through online sales and out-of-town visitors. She has been scrimping and saving and scheming to move into a bigger place to grow her business.

I liked how Aubrey has built up her life away from her strictly traditional Korean parents, especially her father. She asserted her independence early on and is working hard to not only make ends meet but also to keep her dream bakery alive. It is not easy being a business owner in a small town, and it is especially difficult when you are one of only six Asian Americans. However, Lee has a light hand with the story. This book is of two people finding love and their romantic struggles, not of socio-cultural struggles marginalized Americans face.

Landon Kim is a celebrity food critic, who travels all over the world leading a nomadic life. His apartment feels like an impersonal hotel room — owning even a car feels like too much baggage tying him down. He is known in the industry to never walk back a review, whether good or bad. His word is his word, and his reputation rests on it. He also retains his professional integrity by never mixing the personal with the professional; in other words, he does not want to be party to a scandal accusing him of allowing a restaurateur to sleep with him for a positive review.

Landon’s arrival into Weldon is courtesy of a tire blowout ending up with him making an intimate acquaintance with a ditch. He is frustrated that a closed tire shop means that the highly-regarded three-star Michelin restaurant he was on his way to review is now a lost cause. To add insult to injury, when he decides to indulge in a chocolate Bundt cake, he finds it full of gummy worms only after he chokes badly on one. What culinary atrocity is that?!

What I liked about Landon is that despite his fame, he is not full of himself and does not feel the need to inflict his frustrations on others. This is where Lee makes a fine distinction between having an honorable reputation and integrity and being entitled. Landon is the former, not the latter. Landon also comes across as self-assured about who he is and his place in the world without being arrogant.

Aubrey and Landon meet in Weldon’s famous brew pub. And their attraction is instantaneous. Aubrey and Landon end up spending a memorable night together. While Aubrey returns to her bakery, Landon returns to his job in the big city, still smarting from the ill-fated gummy worm. He dashes off a scathing review of the bakery without knowing that his exciting bed partner and the proprietor of Comfort Zone are one and the same.

The personal colliding with the professional.

Well, he has a fabulous plan in mind to help Aubrey’s nearly destroyed business that ensures that he is not going to apologize for his review, he is not going to write a second review, he is going to ask her if she slept with him for a good review… Um. Aubrey is ready to separate his head from his shoulders, but simmers down to listen to his business proposal to resurrect her dream that is dying from his eviscerating review.

Turns out that Landon’s idea to have Aubrey be a part of a new cooking show he is co-producing is a truly wonderful one that educes Aubrey’s talent for TV while celebrating her talent for baking. But he wants to be sure not to repeat the mistake of clouding up the professional with the personal. She is likewise determined to keep him at arms’ length.

I really liked that Lee gave her characters room to stretch and grow by allowing their relationship to unfold over a few weeks instead of days, which many books do. So while the beginning is swift, the middle settles in for deep character development. The angst in their relationship is not just interpersonal compatibility but also the clash between professional conduct and personal wishes.

If you love reading about food and about people with great chemistry who’re at odds with each other, all mixed in with a large dollop of laughter and a heaping spoonful of romance, this is the perfect book for you.

[Note: Daniel Dae Kim will produce and star in a romcom film based on A Sweet Mess.]