Book of the Week: Falling for a Rake by Eve Pendle

One is a perfect rake and the other a perfect lady, and they come together in a hole in the ground. Surely, they were meant to be. And they are. But how they get from a stolen kiss at the bottom of an abandoned mineshaft to a marriage of love, trust, and respect is what makes Falling for a Rake by Eve Pendle a tale worth reading. 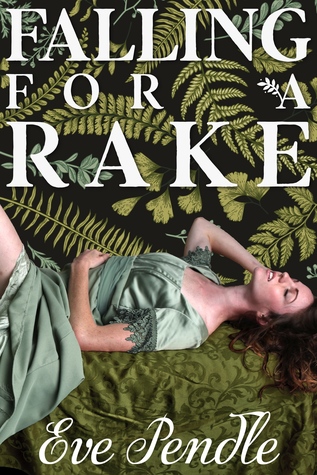 Lade Emily Ravensthorpe is a daughter of a duke and a spinster with Pteridomania, a passion for ferns, which is a craze among many of the ton ladies. In childhood, she was a free-spirited girl, but in her adulthood, she has reigned in her emotions and wishes so tightly that she lives a half unfulfilled life. She has convinced herself that she is leading an exemplary life of virtue and keeping her family free from scandal. Her self-congratulatory manner has twisted the grievous wrong she had done in her youth and buried it so deep in her consciousness, that she doesn’t acknowledge it even to herself or even in her nightmares. But, consciously, she atones for it in so many ways every single day.

Oscar, Lord Markshall, was a ne’er-do-well in his misspent youth but graduated to full rakehood in early adulthood. He has convinced himself that the grievous wrong he did means that he is rotten through and through, and he proceeds to behave as such in polite company and with his cronies. People take his larger-than-life excesses at face value and never look closely at his behavior, which is interestingly circumspect. While everyone agrees with one voice that he is a rake, in reality, he is only a make-believe rake. Through guile and secretive, underhanded measures, he is helping controversial public welfare bills coming up from the House of Commons pass in the House of Lords. He is involved behind-the-scenes in other public service projects. Like Emily, he, consciously, atones for his past in so many ways every single day.

And yet, both Emily and Markshall believe they are bad.

This book, ultimately, is about forgiveness, about how you can do wrong, make reparations for it, and forgive yourself. Once a wrong is done, it doesn’t have to blight your life forever, even if at that time, it feels like an unforgivable action bordering on sin. Emotions and passions have a way of ruling your mind, and people are not infallible; in fact, they’re only human, capable of mistakes and of compassion towards themselves and other people. Adversity has a way of crafting a person in its forge, and actions subsequent to the mistake make you the person you are today. Pendle demonstrates this for her two protagonists in great emotional depth.

There is a sting in the tail of this story, which I won’t reveal, but prepare to be shocked and intrigued. Pendle does a good job of revealing it and having her protagonists work through its ramifications to emerge stronger individually and together as a couple. While the revelation did give me pause when I was reading it, the skill with which Pendle makes that whole aspect of the story work deserves calling Falling for a Rake a romance worth reading.

Keira Soleore writes for the International Examiner and Cogitations & Meditations. She enjoys connecting with readers on Twitter (@keirasoleore) and through her website (www.keirasoleore.com). Her interests include medieval manuscripts, philosophy, poetry, picture books, choir, sunshine and beaches. Keira is a pseudonym.
All Posts
PrevPrevious4 Romances for Your Next Self-Care Day
NextLove Poems: Chromatic by Amy BertramNext