Book of the Week: Forever My Duke by Olivia Drake

What starts out as a series of volatile encounters between two wildly opposing personalities mellows into tenderness and a vibrant passion that makes you sigh in satisfaction of a wonderfully well-written romance. In Forever My Duke, Olivia Drake has created an unforgettable story. 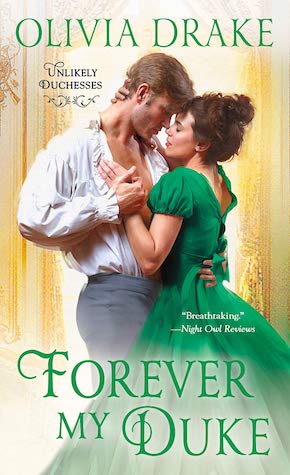 Hadrian Ames, the eighth Duke of Clayton, has been brought up to be high on his consequence and expect everyone’s obeisance as his due. He deals with the world with a chilly hauteur and cool deliberation and orders his life with decorum and emotionless precision. There was a time when as a small boy he had loved his mother and only wanted affection in his life. That boy had been swiftly brought to heel by his stern guardian and educated in the duties and responsibilities due to his rank and estates. Clayton, very conscious of what is expected of him, determines to go through with the dynastic marriage set up for him by his father. He has standards for his ideal wife, and love has no place in that list.

Natalie Fanshawe is an indomitable spirit. She is an American who has killed a man, hacked her way from the frontier to the coast and crossed an ocean to bring a small boy to the only relatives left to him. She is fiercely independent and believes passionately in the equality of all people — in fact, she despises the British class system and its profligate nobility. She is the daughter of a bastard of the English nobility who became a senator in Washington (DC) and has absorbed some of her father’s views. She believes that “one’s success in life is entirely up to each person. You must work hard to raise yourself to a position of authority.” Would she ever curtsy to a duke? Hah! She offers him her hand to shake.

Clayton and Natalie meet in a ramshackle inn near the estate of Clayton’s former guardian who, it turns out, is also Natalie’s charge’s paternal grandfather. He is there to propose a bloodless marriage to the earl’s dewy daughter, and she is there to awaken the earl to his responsibility towards his sole grandson.

In the beginning of the book, Clayton tells Natalie to heed his advice about the obligatory showing of respect with the proverb: When in Rome, do as the Romans. By the end of the book, he tells her that she doesn’t have to curtsy even to Prinny; he would stand by her regardless. In the beginning, she despises him on principle because of his title; by the end of the book, she tells him that his rank and background have shaped him into the admirable man he is today.

The most interesting sections of the story are Natalie and Clayton’s conversations about his rank and responsibilities and her opinions about the heredity class system where vast wealth and wretched poverty are merely an accident of birth. Drake has them gradually move towards each other, in affection and understanding, discussion by discussion. The beauty of this book is how these such disparate people attentively listen to each other, contemplate what has been said even if they are violently opposed to that opinion, and then proceed to make adjustments and compromises to their thinking. There are certain immutable facts: he is a duke; she is an egalitarian American. It was wonderful to see them gradually realizing that each of them is far more complex than those basic facts and that love is life’s most precious gift and all else is inconsequential before it. In Forever My Duke, Drake has forged an enduring HEA for her protagonists.