Book of the Week: Gilded Cage by KJ Charles

In my review of Any Old Diamonds,  I said that KJ Charles is one of those rare writers who pens near perfect romances, and Gilded Cage is no exception. 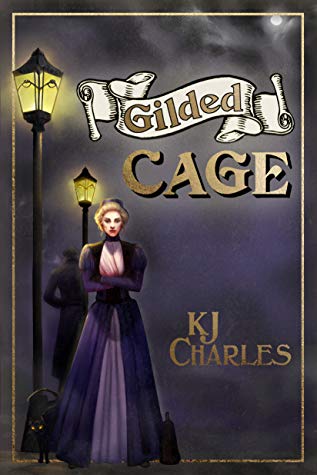 This is a story of a childhood romance turning sour through betrayals and lies and threats. But when the protagonists meet up seventeen years later (in 1895), they discover the wrongs done unto them, and instead of being mired in bitterness, they choose to have faith in their original positive assessments of each other and embark on a second-chance romance. Much water has passed under the bridge since their youth, filled with regrets, missed opportunities, and life-altering experiences, and thus Gilded Cage is a story of great courage on part of the protagonists to choose to trust once again.

James Vane AKA Templeton Lane is the nephew of a marquess and…a jewel thief. When the story opens, James is on the run on the charge of murder. He denies that he did it, but who will believe him given that he is caught looming over the corpse? He had been there to steal opals and just coincidentally ended up being the star of a murder frame-up.

Susan “Sukey” Lazarus is an enquiry agent with the Lazarus & Braglewicz firm. Her past is checkered with all sorts of borderline criminal doings, but she now walks the straight and narrow, though she could never work for the self-righteous Metropolitan Police.

Susan and James meet when he crashes into the rooms she rents at a boarding house, attacks her to ensure her silence, and ends up coshed in the balls and a gun drawn on him. A rather fortuitous start to their relationship, wouldn’t you say?

For a man living by his wits and being at the top of his criminal trade to now be a hunted murderer having to skulk in street corners is a difficult pill to swallow. But instead of running off to the Continent under an assumed identity as his friends suggest, he decides to seek the help of the best enquiry agent he knows to help him clear his name. This involves them having to be constantly in each other’s company and to trust each other. The only problem with this plan is that they don’t trust each other. So how is this detecting work really going to succeed?

Charles has her characters walk a careful line between what is acceptable criminality and what is out-n-out villainy. As a reader, I had to constantly hush up my sense of right and wrong and consider each situation from the characters’ moral framework, which is of their time, their personalities, and their backgrounds. This is where Charles truly shines as a writer — this grappling of morals and ethics is a commentary on her historical research and philosophical thought.

The title of the book is apt. Both Susan and James have successful professional careers that have made them money, but they have very little personal freedom within its confines. They are mired in self-doubt and feelings of inadequacy stemming from the depredations on their psyche from their past. The aftermath of their youthful relationship has also stayed with them through adulthood, and wariness is a tough habit to break. And so we circle back to trust and how they can move beyond an adversarial but cooperative and sexually passionate standoff to a close relationship of warmth, understanding, and deep, abiding love.

Like I said in my review of Any Old Diamond, if you have never read a KJ Charles book before, I envy you your journey into some of the best stories romance has to offer. While Gilded Cage is part of the Lilywhite Boys series, it can be read as a standalone.

Keira Soleore writes for the International Examiner and Cogitations & Meditations. She enjoys connecting with readers on Twitter (@keirasoleore) and through her website (www.keirasoleore.com). Her interests include medieval manuscripts, philosophy, poetry, picture books, choir, sunshine and beaches. Keira is a pseudonym.
All Posts
PrevPrevious5 Books that Defined my Decade
NextStarter Guide: YA Contemporary NovelsNext