Book of the Week: Girl Gone Viral by Alisha Rai 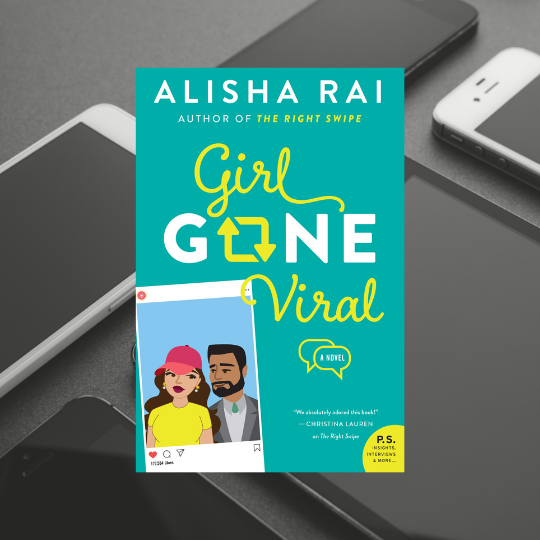 Following up on the success of The Right Swipe, book one of the Modern Love series, Alisha Rai delivers a fantastic story in Girl Gone Viral. In this book, Rai runs with the Twitter #PlaneBae story to forge her own twists to the viral phenomenon. 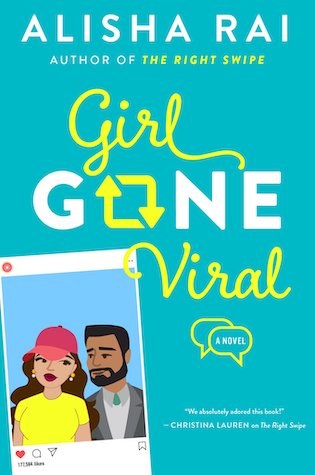 Katrina King-Arora, a Thai American former model, is now an angel investor and a recluse. She had escaped her abusive father, who used to also be her manager, by marrying an older, kindly man who has now left her widowed. She has always struggled with anxiety her whole life due to her father, but her mental health struggles became more intense after being kidnapped a few years ago. As a result, she considers herself lucky to have a coterie of female friends, her “found” family, who get her and support her.

Katrina is highly circumspect about her privacy, but one day, she drops her guard at a crowded café and allows a stranger to share her table but repeatedly refuses to go on a date with him. Unbeknownst to her, someone falsely livetweets her interactions as a budding romance under the hashtag #cafebae, which quickly catches the attention of the denizens of Twitter. This lands her in physical danger, and her latent panic disorder rears its ugly head.

Jasvinder “Jas” Singh, with a mixed Punjabi Indian and Mexican ancestry, is a former soldier who now uses his considerable skills in his work as a bodyguard. Behind the scenes of his new job, he struggles to overcome the PTSD he suffers from his time in the military. Currently, he is Katrina’s bodyguard. To escape the fallout from the twitterstorm, Jas suggests that he and Katrina retreat to his family’s remote farm in Northern California to lie low for a while and hope people’s short-term memories will allow the stay to be short as well. Katrina seizes on this chance to escape the limelight.

Rai has done an excellent job of portraying how these two people suffering from severe mental health issues work through them and learn to manage them even as they lead fulfilling lives.  Rai’s characters’ positivity towards their illnesses and normalization of therapy in their everyday lives allows readers dealing with these issues to feel “seen,” while offering hope for a better future for themselves. To me, the sensitivity and delicacy of Rai’s portrayal of these aspects of her protagonists’ lives is the heart of the story.

Rai rightly brings up the issue of social media’s predilection for invasion of people’s privacy and ruthless unconcern for their wellbeing. While social media’s attention span is short, its effect can be brutal. Rai’s book serves as a warning for those who are complacent about the hidden dangers of social media’s false chumminess.

Both Jas and Katrina have severe trust issues: he, from his time in the military, and she, from her father and now Twitter. Rai’s approach, with how her protagonists learn to lean on each other while being vulnerable with each other, is to come at the core issues tangentially and gradually in a slow and deep exploration. Katrina and Jas’ ability to be open with each other, the sheer generosity of their spirits despite their past experiences, leads to trust being educed. Their journey into trust and love reminds me of essayist-poet Leeya Mehta’s remark: “We seek the company of others as a way of making our own life whole, fitting missing pieces of melody into our own life’s symphony.”

I thoroughly enjoyed this slow-burn romance that is sweet and exciting at the same time. The sudden bursts of humor, the kindness between the protagonists, the normalization of mental illness, and the depiction of how people from all walks of life and experiences can have a happily ever after is a book well done.

Keira Soleore writes for the International Examiner and Cogitations & Meditations. She enjoys connecting with readers on Twitter (@keirasoleore) and through her website (www.keirasoleore.com). Her interests include medieval manuscripts, philosophy, poetry, picture books, choir, sunshine and beaches. Keira is a pseudonym.
All Posts
PrevPreviousThe Best 20 Books of Fall 2020
Next“What’s Love Got to Duke With It?” Our Favorite Fictional DukesNext