Book of the Week: Hana Khan Carries On by Uzma Jalaluddin 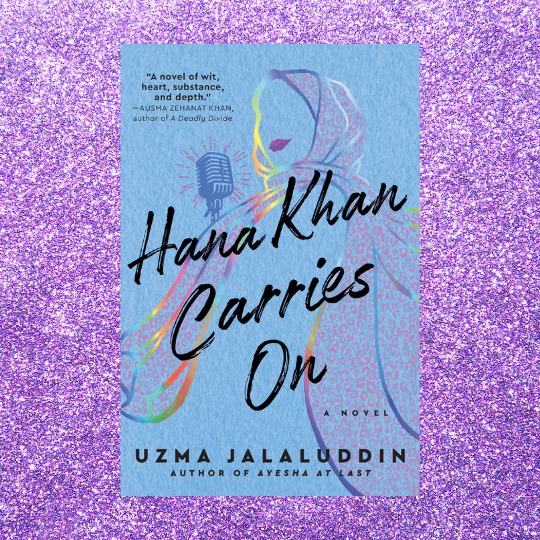 A touch of a hand. Warmth. A cupping of the face. Tenderness. Glances and long looks. Mesmerizing. There is a wealth of meaning in small, small things. Relationships are spun out of romanticism like this, infused with the weight of regard and understanding and care.

Such is the beauty Uzma Jalaluddin brings to Hana Khan Carries On. 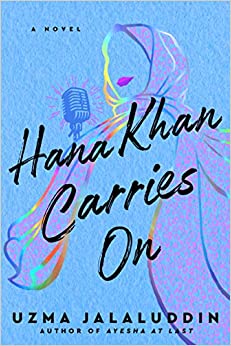 I read Jalaluddin’s début book Ayesha At Last with such joy two years ago, and I have been waiting ever since for her second book. To her new book, Jalaluddin brings a maturity and keener eye to emotional nuance. Rich with cultural texture, replete with social nuance, and brimming with humor, it is a delight from the first word to the last. Her talent is in allowing her characters to recount their own stories, whether they are the main characters or the secondary ones. No one gets short shrift in the attention she pays to creating whole, complex people. Jalaluddin’s signature style is in her social commentary on the lives led by Indian Canadian Muslims, the immigrants and the first generations. She had started this conversation with the reader in Ayesha At Last, and she continues on that conversation in Hana Khan Carries On.

Hana is a young first-generation immigrant woman, living in the Golden Crescent region of Toronto. She dreams of working in radio, telling stories of people and how they live in the world. To make that dream a reality, she interns at a radio station, while honing her skills on a secret podcast with a deeply loyal following. The Golden Crescent is made up of first- and second-generation family-owned stores, such as Hana’s family’s Three Sisters Biryani Poutine restaurant, a halal fixture in the area. All the people who work in the Crescent live in the middle-class neighborhoods surrounding the shops, a tight-knit community at work and at leisure.

Young Aydin is a newcomer to the Golden Crescent, brash and wealthy. He is a first-generation immigrant as well as comes from faraway Vancouver. He has come to open his own halal restaurant and is determined to put Three Sisters out of business. When his domineering father and he visit Three Sisters, they are surprised by the food but eager to sneer at the décor and appointments. In caustic words, they denigrate Hana’s family’s livelihood.

To Hana, even if Aydin’s restaurant were to fail, he would always have his father’s wealth and contacts to fall back upon, but if her mother’s restaurant were to fail, her family would be bereft, their very survival at stake. Little does Hana realize that for Aydin, the success or failure of his restaurant is just as high stakes. It means being independent of the emotional trauma of his father or proving to himself and to his father that he will always be a failure. Hana’s struggle is external, whereas Aydin’s is internal, but both are gut wrenching and of vital importance, and this sets them on a collision course with each other.

Hana and Aydin are polar opposites. To Hana, it is more important esse quam videre — to be, rather than to seem, but to Aydin, the face you show to the world is who you are. Aydin’s voyage towards change begins when he meets Hana. Until then, despite a deep inner disquiet, he was complaisant and compliant with his father’s wishes. But Hana makes him sit up and notice the world around him and simply by being who she is, she pushes him into examining how he wishes to step forth in life. As Roxane Gay says, “So much important work toward change happens in the uncomfortable moments where we are forced to confront the things that challenge us.” The journey of life between who you once were and who are now becoming is where the dance of life really takes place.

Jalaluddin’s books exemplify what happens when people come together with their minds and hearts and souls. Falling in love is not enough. Hana and Aydin connect at a deeper cultural, social, and religious level, the substratum upon which their love is built. That profound understanding of what is important in life runs in their veins and resonates in their sinuses. It imbues the steps they take towards a relationship with weight and gravitas. What they do, who they become have repercussions beyond themselves to their families and community. This reins in their headlong rush into romance in a measured, more deliberate way and allows the reader to savor their every glance and every word. Thus, in the act of reading, Jalaluddin is allowing the reader to participate in the unfurling of the protagonists’ destiny.

Hana Khan Carries On is a book that you need to spend some time immersed in. Jalaluddin’s lyrical prose brings to life a story in subtle shades of meaning and expression as the characters share with you their deepest secrets and dreams. Long-buried family secrets and hate-motivated attacks add to the complexity of the narrative. The book can be read is multiple ways: as Hana’s life journey, as Aydin’s character growth, as romantic love between the protagonists, as being Muslim in Canada, and so on. In this review, I have chosen a few of those strands that make up the narrative. You will have to read the book to discover them all. I cannot express how much Jalaluddin’s books please me; I hope they bring you joy as well.

Keira Soleore writes for the International Examiner and Cogitations & Meditations. She enjoys connecting with readers on Twitter (@keirasoleore) and through her website (www.keirasoleore.com). Her interests include medieval manuscripts, philosophy, poetry, picture books, choir, sunshine and beaches. Keira is a pseudonym.
All Posts
PrevPreviousTrope Rec Tuesday: Caretaking While Sick Scenes We Love to Read
NextRaggedy Ann goes to Hollywood by Elle GrecoNext