Book of the Week: Headliners by Lucy Parker

How does Lucy Parker continue to deliver one fabulous book after another every year? This is her fifth book and my fifth ‘A’ for her. I read her first Act Like It in one sitting and laughed and laughed so much that my husband read it as well. He loved it — one of a rare handful of romance novels he had read. Since then, he has read every one of Parker’s books and can’t wait to dive into this one. I can’t recommend Headliners highly enough. 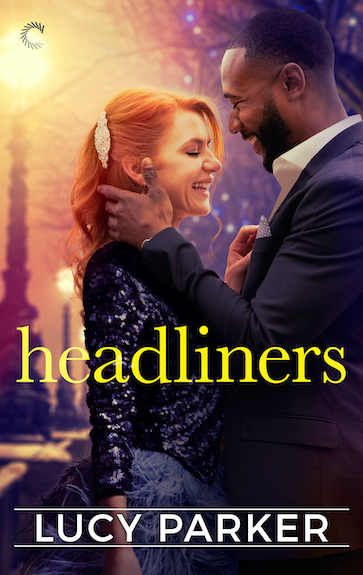 Two feuding work colleagues discover attraction and love. On the surface, this sounds like a common premise these days, but in Parker’s hands it turns into something memorable — an engrossing story of fascinating characters that is told in an engaging, fast-paced style and is punctuated with acerbic comments and biting witty one-liners.

For years, Sabrina Carlton and Nick Davenport have been rival presenters on the same TV network. Neither can stand the other, and the feud has involved barbs being aired about the other on their shows. The viewers have lapped it up and the numbers ratings for both shows are high.

In a moment of journalistic decision, Nick airs Sabrina’s family’s scandal on live TV just as it is breaking. It is an action that he feels justified in making in service of his viewers. Understandably, Sabrina feels hit over the head with brickbats just when she is feeling her lowest, and she is furious. The remarks they trade on their shows now take a turn for the nasty. In addition, Sabrina’s job as the headliner of a show is now on shaky grounds thanks to the scandal.

Life: just when you seemed to be heading down a path of total bullshit, the light would return, birds would sing, and your greatest professional rival would walk the social-media plank for the viewing pleasure of over one million people.

In a moment of stupendous lunacy, Nick airs his expletive-laden unflattering views of their network chief to an unknown, silently-recording intern who promptly puts it on the internet. Nick’s show is now toast.

The network is in a dilemma. In order to save face, the chief wants to sack both Nick and Sabrina, but their viewership gives him pause. So in a Machiavellian move, he decides to punish them while at the same time save the failing morning show — he makes Nick and Sabrina cohosts. They feel it like a punch to the gut but also lucky to have a paycheck. They accept even though they want to maim the other.

The kicker in the new job is that they only have all of December up until Christmas Eve to make a success of the dying morning show otherwise they’re out on their rears. Viewers start tuning in to watch their animosity played in real time now that they are pitted against each other. Initially, they are disappointed at their professional amicability. But then the viewers get a whiff of romance in the air – gasp! Sabrina and Nick are caught briefly holding hands. Nothing like a budding romance between enemies to spice things up.

There is a delicious sub-plot involving a saboteur on their show resulting in turning what-they-had-hoped would be a mature professional show into a Laurel & Hardy show. Their TV viewers — and Parker’s readers – find these mishaps highly entertaining and ratings soar. Nick and Sabrina, less so, feel like the morning show is a come down in the world of journalism from hard-hitting news, so the continuous gaffes cause them to pound their heads in embarrassment and grimly band together to unmask the culprit.

Much to their discomfort, Sabrina and Nick discover vulnerabilities in each other where before they thought the other is a hard-baked journalist who has no fucks to give. It is dizzying when the ground shifts under their years of firmly-held views, but I liked that instead of disbelieving and holding on to their past views, each is willing to give the other a second chance. For such outwardly proud adversaries, they are humble enough to acknowledge that they could be wrong about the other person.

People make mistakes all the time, and not all mistakes are irremediable. It is easy to make a snap judgment and condemn the other person for all time, but it takes courage and maturity to see the humanity in the other person. So when Nick apologizes with sincerity and humility, instead of throwing his words back in his face, Sabrina decides to trust him and believe him. She gives him a second chance, and he appreciates what a precious gift that is, and he, in turn, returns her esteem by tuning in to her emotions and thoughts and providing succor and care.

Their movement from being on opposing sides to being on the same side isn’t instantaneous, but thoughtful and careful. But once they are on the same side, they are all-in — no misunderstandings are allowed to fester, because they always look at the other in a benevolent charitable light. This to me is the hallmark of their HEA — the ability to give the other the benefit of the doubt at all times.

It is such characterization that makes Parker’s books so memorable. And unexpected sharp humor makes these moments truly shine. Parker’s books are unforgettable.

Keira Soleore writes for the International Examiner and Cogitations & Meditations. She enjoys connecting with readers on Twitter (@keirasoleore) and through her website (www.keirasoleore.com). Her interests include medieval manuscripts, philosophy, poetry, picture books, choir, sunshine and beaches. Keira is a pseudonym.
All Posts
PrevPreviousComics and Chatter: A Chat with D.C. Graphic Novel Creators Shannon and Dean Hale of Diana Princess of the Amazons
NextFrolic’s December Book Stack!Next