Book of the Week: How to Love a Duke in Ten Days by Kerrigan Byrne

How to Love a Duke in Ten Days is a book of aching sensitivity. Its opening scene so shocks the senses that the reader is left wondering how this heroine is going to achieve her HEA. But she does…because Byrne takes great care in ensuring that not only is the HEA convincing but it is enduring. 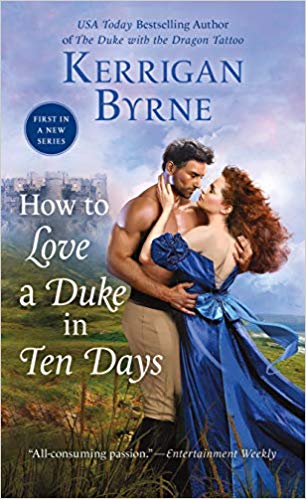 Dr. (Lady) Alexandra Lane is the daughter of an imprudent and impoverished earl, who is brutally raped at her finishing school in Switzerland. Despite her horrific experience, she retains enough presence of mind to kill her rapist to prevent further depredations. Her two closest friends close ranks around her and help her keep her secrets. Her friends harbor secrets of their own, and they promise to watch out for each other forever. By dint of superhuman effort, Alexandra rises above her trauma to get a doctorate — a rare achievement in Victorian England — and successfully travels to excavation sites at far reaches of the globe.

The Duke of Redmayne is a man of great strength and physical presence. He is also a wealthy man of intellect, who carries his responsibilities to his title with sincerity and dedication. However, he is also blessed with itchy feet and loves to travel. It is during one such trip that he is gored by a wildcat and is unable to return home as promised. Presuming him dead, his faithless fiancée promptly marries his cousin who is his heir. When Redmayne returns home, he is deeply angered by her.

Our story begins when Alexandra is on her way to the castle where one of her two closest friends is getting engaged to Redmayne due to a longstanding arrangement since their childhood. She she runs into the selfsame duke while saving his horse from bolting and causing mayhem in a storm. Their meeting could not be more incongruous: She is covered in mud and rain and huddled in a corner of a railway platform, shrinking in fear from the big man, who is so appreciative of her help and concerned for her wellbeing that he is running his hands over her to check for broken bones and wounds.

And Alexandra realizes, to her sorrow, that her fear of men, that she thought she had managed and disguised from revealing to others and sometimes even hidden from herself for ten years, is still ever present in her psyche. She is just as much of a victim to her past trauma as ever before.

And yet, in order to save her friend from an unwanted marriage and desperately in need of funds herself, Alexandra offers herself in marriage to Redmayne…and he cannot resist her.

Just as Alexandra suffered trauma, Redmayne had also suffered at the hands of his fiancée. The wildcat in the jungle left scars on his face, but his wildcat of a fiancée left scars on his psyche. She had convinced him that he was a brute because of his looks and she had encouraged him to play the part. By slow degrees, Alexandra convinces him that he is man of sensitivity and goodness, and he cannot help but fall in love with her kindness.

All the love scenes in the book are one of great alertness and awareness on his part because of her unexplained skittishness and fear of the act — but he respects her feelings and wishes. The scenes are also one of great vigilance and indomitable strength on her part, because she wants to lessen the impact of her trauma and heal from it in order to have a meaningful life with him. His patience and care allows her to trust him more as time passes. However, despite Alexandra having fallen in love with Redmayne, the author does not sweep aside Alexandra’s horrible experience in one fell swoop of a love scene. While Alexandra’s desire for Redmayne is as intense as his is for her, trauma cannot be conquered in a sweeping gesture. It takes time and forbearance; it is a case of two steps forward, one step back.

The book has a compelling mystery as well. Someone knows that she murdered her rapist who has been blackmailing her for ten years. Now Alexandra’s money has run out, and her life is in danger. At the same time, Redmayne is convinced that the enemies he has made as duke also want him dead.  Are both in danger from being murdered or just one of them? And if so, who? And by whom? The reveal at the end of the book is very satisfying with an excellent build up.

While parts of the book, especially the beginning, are almost unbearable, the heroine’s journey to wellness and happiness from that nadir of her experience is an affirmation that no matter the circumstances of your life, happiness is within reach. It is a story of such hope.

Keira Soleore writes for the International Examiner and Cogitations & Meditations. She enjoys connecting with readers on Twitter (@keirasoleore) and through her website (www.keirasoleore.com). Her interests include medieval manuscripts, philosophy, poetry, picture books, choir, sunshine and beaches. Keira is a pseudonym.
All Posts
PrevPreviousTake This Quiz to Find Out the Hidden Forces that Make You You by Bill Sullivan
NextDaily Frolic: Harlequin’s “Romance Includes You” Mentorship is Your Chance to Get PublishedNext