Book of the Week: If a Lady Lingers by Anna Harrington 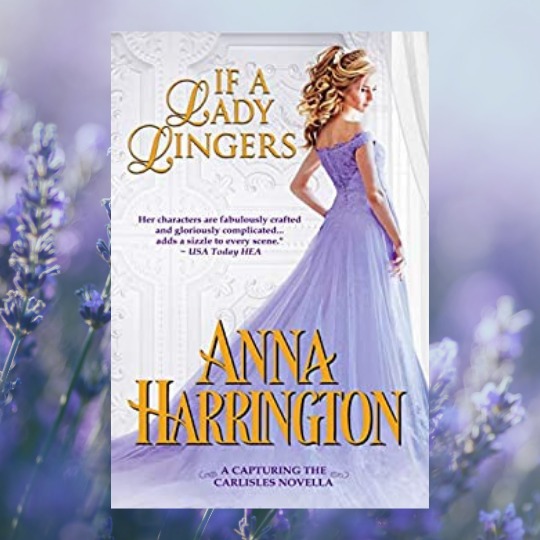 Slowly, Whitby moved his hand at his side, just far enough to touch hers as it rested against her skirt, and lightly caressed the back of her hand. She trembled but didn’t pull away. Happiness squeezed his chest. 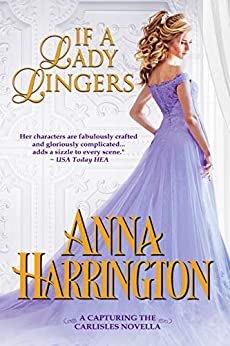 Daisy Daring has a secret. She’s the daring architect and interior designer behind her ailing father’s architectural fame these days. She yearns to sign her own name on her designs and dreams of receiving recognition for her hard work and talent. But she knows, Society is not ready for a woman architect. She’s been condescended to and patronized and dismissed enough times to know that the only way she can see her designs built is to sign her father’s name on them. The ache of losing her mother when she was young has never gone away, and the constant thwarting of her passion has led to someone who lives in the shadows. She is constantly conscious what everyone thinks of her.

The huge grin on his face competes for the brightest spot on Hugh Whitby’s person with his wildly colorful and flamboyant clothes. He is very tall and very slender with narrow shoulders. He smiles from sunup to sundown, laughs loudly, and is enthusiastic about all that life has to offer him. While wealthy and the son of a baron, Whitby has none of the airs and arrogance of high rank. He uses his wealth to provide for a day school that educates children, feeds and clothes them, and trains them for a life that will lift them out of poverty. Despite his joy in the world, inwardly, he still mourns the mother he lost when he was young. In her memory, he wears clothes of every hue, no matter how clashing. He cares not a whit what others think of him.

Daisy and Whitby meet when he comes to visit her father with a commission to have a house built for himself and a group of children who will be boarding with him.

The story unfolds in the liminal space between Daisy’s first seeing Whitby in all his ridiculous glory in the light of the afternoon sun and receiving recognition for her architectural talent. While he is certain from the first moment he meets her that he is in love with her and that he is only falling into love more and more as time passes, that period of time is one of discomfort, of waiting, and of transformation for Daisy, where her old habits, beliefs, and even personal identity shift and change and are forever gone.

Whitby is painfully aware that he is merely cromulent in appearance, and that it would take an exceptional woman to educe the whole of him. Would Daisy be the one willing to take on this challenge? As poet Nikki Giovanni has said, “Love is the patience to forgive and go forth,” and Whitby is willing to give Daisy every chance, commit every mistake, so long as she truly “sees” him at last.

Whitby is such a refreshing change from all the usual tall muscle-bounded heroes. Oh, Readers, I know you will point me to this or that hero who isn’t quite that, but you will agree, I am sure, that on average, our romance genre heroes are six-plus and ripped. As though, there is only one marker of male attractiveness.

Whitby has joie de vivre in spades. His smiles, his laughter, his enjoyment in the small things in life bring light and joy to Daisy’s life. He recognizes her achievements and takes pride in them. He accepts the whole of her, from her reservedness and earnestness to her opinions and architectural brilliance. What could possibly be more attractive in a life partner?

Whitby and Daisy’s relationship develops over six months. There is plenty of time for a slow romance to unfold, for feelings to cautiously unfurl, for trust to build, and for the reader to dream in the interstices of the words, in the white spaces around the words.

I cannot recommend If a Lady Lingers highly enough.

Keira Soleore writes for the International Examiner and Cogitations & Meditations. She enjoys connecting with readers on Twitter (@keirasoleore) and through her website (www.keirasoleore.com). Her interests include medieval manuscripts, philosophy, poetry, picture books, choir, sunshine and beaches. Keira is a pseudonym.
All Posts
PrevPreviousYA Historical Fiction Books Releasing This Fall
NextBook of the Week: A Timeless Christmas by Alexis StantonNext