Book of the Week: Love Lettering by Kate Clayborn

It took me a long time to start writing this review. You know how it is? A crisis of confidence. You don’t want your words to mar the perfection of the prose you just read. You want the readers to experience the book directly without reading about your experience with it. But then you think that perhaps there are some readers out there who prefer a brief look into a book before they take a chance on it, especially if the author is new to them, so then you take courage into your hands and start writing…and then suddenly, you find yourself faced with the problem of being unable to stop. Which is all to say that this review of Love Lettering is a trifle long. 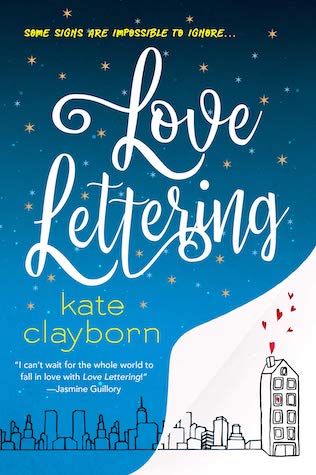 Kate Clayborn in an author of prodigious talent, and in Love Lettering, she has created perfection.

This is a measured story,  intentionally told, of deep abiding love between two people, who, on the surface, are the antithesis of each other, but who, underneath it all, understand each other with the kind of meeting of hearts, minds and spirits that poets call “soulmates.”

Margaret “Meg” Mackworth is a freelance artist who creates beautiful useful works of art through intricate lettering and decorative motifs. Meg, in turn, is a work of art herself: warm, passionate, thoughtful…someone who can put herself in another person’s shoes and see the world through their eyes. She is someone who you instinctively trust, because she makes the effort to understand not just what you say but also what you don’t say — the subtext, which is where life is lived. Thus, she shapes art even as art shapes her.

Reid Sutherland is an intense mathematical genius, who works incredibly long hours at his job on Wall St. Having been unsuccessful as a teaching assistant in graduate school, he decides against becoming a professor, even though teaching is his first love, and decides instead, to apply his talents to acquiring wealth on Wall St. He enjoys the money he has made, but he is enormously unhappy at his job — we discover the reason why later on in the story — but he is stuck with the company for the nonce. Reid is someone who, you would say, isn’t in tune with his feelings. This is not to say that he doesn’t feel things deeply, because he does, but he is used to glossing over his emotions because he is insecure about expressing them to others — he even wonders if he is able to.

The beauty of this story is in the finely nuanced degrees in which it progresses, exploring every nook and cranny of Reid’s and Meg’s personalities and psyche. Words and letters are signs to Meg and mathematical symbols to Reid — both of them take them seriously in their hearts. Thus in this story, you see them turning each word they say to each other over and over in their minds, examining it for meaning beyond the obvious. Emotions follow upon understanding, even as understanding follows upon emotions. Language has the power to demean and wound as well as to respect and exalt with the whole gamut of human emotion in between. And in this story, we see Clayborn investing in her protagonists the wherewithal to experience these emotions, to express them with words and to process them with maturity.

I find New York City a fascinating place, and it was lovely to see the city through Meg’s eyes and through Reid’s eyes — how she embraces the city in all its myriad incarnations and how he holds it at arm’s length, because for the same reasons she loves it, he hates it. And then Clayborn has the city working on them even as their relationship evolves. Reid starts to see the city through Meg’s eyes, and soon, the city is synonymous with who she is, and thus, inseparable from his feelings for her. This is romance with a capital ‘R.’ Not only does a person grow more beautiful and more dear the more you get to truly understand them, but also the more dear does all aspects of their life become to you, because they are important to you.

Competence is so attractive in a person. Being good at something and knowing this about yourself is self-affirming. Meg and Reid are both successful and dedicated to their jobs and respect each other for that. I enjoy seeing characters working hard at their jobs, because it shows them having a life beyond the relationship. That it is true to them and speaks so much about who they are as individuals, adds to the complexity of their connection.

Clayborn’s prose is so consonant with the characters and their emotions, that it is almost meta in the way the prose works in service of the story even as the story unfolds within its structure. This entire story brings to mind a flower with multiple whorls, where each layer brings such rich color and texture to the flower, while in itself being encapsulated by the flower.

I rarely say this, but for Love Lettering, I can scarcely contain myself: Do read it. Read it for the complex characters, precise emotions, and wonderful prose, and read it to be transported to the wonderful world of words and New York City.

Keira Soleore writes for the International Examiner and Cogitations & Meditations. She enjoys connecting with readers on Twitter (@keirasoleore) and through her website (www.keirasoleore.com). Her interests include medieval manuscripts, philosophy, poetry, picture books, choir, sunshine and beaches. Keira is a pseudonym.
All Posts
PrevPreviousThis Cute Star Wars Merch is Out of This World
NextDaily Frolic: The After We Collided Trailer is Here!Next