Book of the Week: Make Up Break Up by Lily Menon 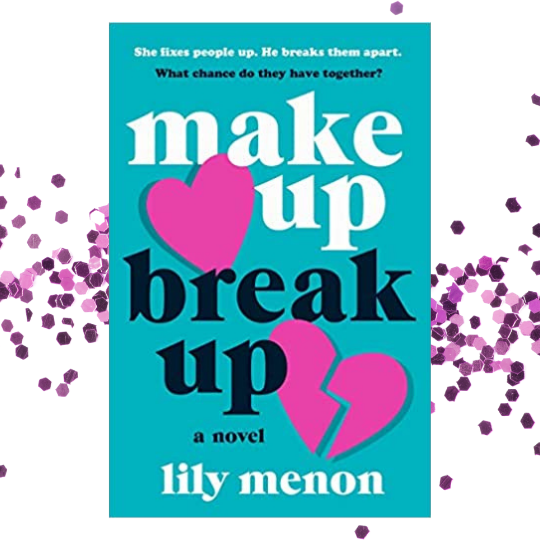 I have loved Sandhya Menon’s YA contemporary romance novels, so I was curious how she would make the transition to adult contemporary romance under the pen name Lily Menon. With Make Up Break Up, Menon has a winner on her hands. Put two passionate individuals intent on their startups on opposite sides of conquering the romance market and sparks are sure to erupt. 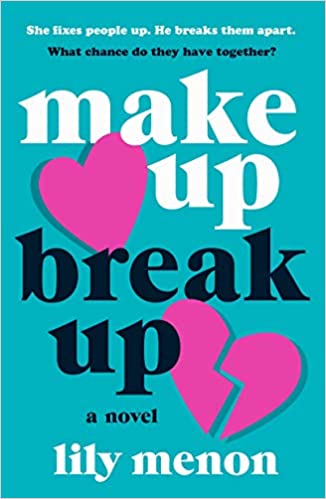 Annika Dev is the CEO of Make Up, an app to help estranged people find love again. Annika and her smart alec developer have worked hard to make their prototype. They are seeing excitement among beta testers, but have, as yet, failed to convince investors of the long-term success of their app. Their cash cushion has run out, and they are facing eviction soon. Annika has pinned her hopes on the EPIC conference, where she hopes to woo and impress investors about how vital her app is for how technology can be used in interpersonal spaces for success in romantic relationships. Her father wants her to become a doctor, but she knows with every particle of her being that she is a creative entrepreneur, and her future lies with Make Up.

Hudson Craft is the CEO of Break Up, an app that helps people break up relationships that have become stagnant or burdensome. Hudson and his team have made a huge splash on the startup scene and seen their app downloaded a million times. Hudson’s reputation is of an up-and-coming CEO who’s a visionary, a genius. Hudson is planning to pitch his app at the EPIC conference to woo and impress investors so he can take his app to another level. Hudson had always dreamed of becoming a sculptor, but he needs to make money so he can help his parents, so for now wealth is what he is pursuing. And he is satisfied with what he has achieved with Break Up.

Annika and Hudson have history together. At a conference in Vegas a few months ago, before either of their apps were anything but a dream, they had hooked up for a blissful weekend. They had connected in ways that were meaningful for both of them. While Hudson was hurt that Annika did not share his desire to move their connection into a relationship, Annika walks away with deep regrets but also sure that they had no future together.

They meet in the present when Annika realizes that Break Up has moved into the office next to hers and is competing neck-to-neck with Make Up. Annika is convinced that Hudson took her idea for Make Up, which she had shared with him in Vegas, and twisted it into a hurtful app that has become wildly successful while her app is floundering. Jealously combined with animosity form the foundation of how she feels about Hudson.

I have always enjoyed Menon’s storytelling style where she sets up her main protagonists’ motivations and passions right away. You get to know them well and so are then able to follow along the story from their point of view. In Make Up Break Up, Menon sets up Annika to be sympathetic in the reader’s eye right from the beginning. Then as the story unfolds, you see her flaws and strengths, but despite seeing how she has erred in her assumptions and actions, you retain your sympathy for her. You have experienced her life and her troubles and triumphs, so you feel her emotions towards herself and others, particularly her love interest, Hudson.

Menon does what not many authors are able to do: Show you the non-POV in their full complexity through the eyes of the POV character, and also, through the author conveying it directly to the reader without getting into an omniscient POV. Thus, through body language and reactions, words and actions, you understand Hudson through Annika’s lens and through your own perceptions. At times, the reader is one step ahead of Annika in deciphering Hudson; at other times, the reader is a step behind Annika because the reader is not privy to what happened in Vegas between those two. This is marvelous storytelling, by turns revealing, by turn obscuring.

Hudson is a cipher to Annika and to the reader in all his contradictions, so Make Up Break Up is as much a story of the romance between them as much as it is an uncovering of who Hudson really is. At times, Hudson is a mystery even to himself, so the book is a journey of self-discovery for him — who he is and what he wants to make of his life. Annika acts as a catalyst in this process of looking deep inside himself, and the better he understands himself, the better he understands how to connect with Annika.

Actor Regé-Jean Page said in an interview recently, “A big part of the romance for me is in discovering what is truly beautiful about someone. What is that jewel at the heart of them? How do you recognize it, despite all of the glamour and fireworks and bright lights in the way?” This is exactly what Annika does. She sees glimmers of that goodness in Hudson she saw in Vegas, and she wants to understand why that beauty got callused over and how she can help Hudson reclaim it.

Make Up Break Up is a lovely story you want to linger over, savoring the story as much as the storytelling.

Keira Soleore writes for the International Examiner and Cogitations & Meditations. She enjoys connecting with readers on Twitter (@keirasoleore) and through her website (www.keirasoleore.com). Her interests include medieval manuscripts, philosophy, poetry, picture books, choir, sunshine and beaches. Keira is a pseudonym.
All Posts
PrevPreviousHow the Past Informs Contemporary Fiction by Joy McCullough
Next5 Reasons You’ll Love Romance if You Love Action MoviesNext