Book of the Week: Man vs. Durian by Jackie Lau

“You are much better than a durian” is the highest compliment Valerie can pay Peter.

“You are like a durian. Because you’re spiky on the outside and mushy on the inside and utterly delicious” is the highest compliment Peter can pay Valerie. 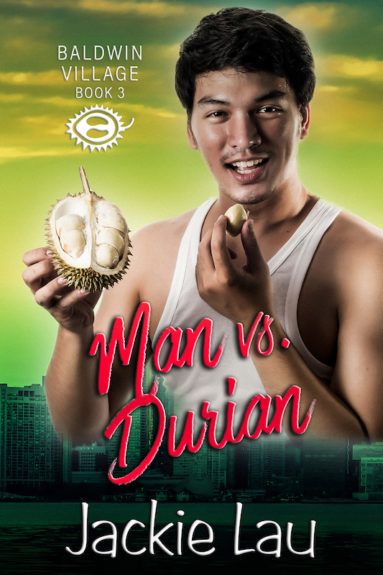 Durian, you ask? Yes, I am talking here about that spiky fruit that smells extremely strongly of natural gas, rotten onion, and vomit. And from this improbable aphrodisiac, Jackie Lau has built a sweet romantic tale in Man vs. Durian.

Valerie used to be a software developer and in a deeply committed relationship, or so she thought, till her boyfriend used her and discarded her without a thought. Within days of his loss, she lost her high tech job also, and is now helping her friend out at her ice cream shop. Her mother dreams of her daughter marrying well and having a successful career again. In a fit of impulse to get her mother off her back, she makes up a boyfriend. Ack! Now she has to hunt for someone to be her fake boyfriend stat.

Peter is a landscape designer and installer. He loves his work and is happy where life has taken him. The only thing he absolutely hates is…durian, but, unfortunately for him, the fruit features largely in his life. One day, he impulsively stops by the ice cream store where Valerie works.

Their meet-cute happens over — you guessed it — durian, when she spills the odorous ice cream all over his shirt. He is appropriately horrified, and yanks his shirt off, even as he admires her and is amused by her. Even though, she, too, admires his body, she sees not boyfriend material in him, but fake boyfriend material.

Well, Valerie’s mother wants a doctor for her daughter. Voilà, Peter agrees to masquerade as a pediatrician.

Lau is really skilled at building characters of depth and complexity.

In Peter, Lau has created a tender and emotionally available man, who is also mature, easygoing and has a great sense of humor. He loves being in relationships and connecting deeply with women. He feels a strong bond with Valerie – he enjoys her humor and is deeply attracted to her — and he senses that beneath that tough exterior, she is a sensitive person So while he agrees to become Valerie’s fake boyfriend, he secretly hopes that their fake dates will lead to real dates and a real relationship.

In Valerie, Lau has created a woman of emotional vulnerability with a hardened shell to protect that vulnerability. She cannot trust Peter, no matter how thoughtful, respectful, and kind he is. She enjoys being with him and is attracted to him, but she cannot let go of that suspicion that he is too good to be true. She is sure she is broken, so why would he want to be with her? As a result, she is convinced that he is going to be staying firmly in the fake category.

Man vs. Durian is thus a story of emotionally and temperamentally opposite people coming together, and it shows how patience and kindness can make relationship magic happen. Most men would’ve run for the hills from Valerie’s “get off my lawn” vibes, but Peter is not a person who gives up easily when he is convinced that the effort is worth his time. And prevail he does, as he slowly understands her and figures out how best to draw her out. Her growing trust in him is shown beautifully by Lau.

With every book of Lau’s I read, I fall further under the spell of her tender stories and witty writing. You don’t want to miss Man vs. Durian.

Keira Soleore writes for the International Examiner and Cogitations & Meditations. She enjoys connecting with readers on Twitter (@keirasoleore) and through her website (www.keirasoleore.com). Her interests include medieval manuscripts, philosophy, poetry, picture books, choir, sunshine and beaches. Keira is a pseudonym.
All Posts
PrevPreviousLove YA: Top 3 Y.A. Reads for the Week of August 20th!
NextFour Musicals You Need to Listen to ImmediatelyNext