Book of the Week: Marriage by Arrangement by Sophia Singh Sasson

Marriage by Arrangement is the first book in Sophia Singh Sasson’s Nights at the Mahal series, and I just fell in love with her world. There is deep research and there is innate knowledge, and Sasson skillfully blends the two in her memorable worldbuilding. 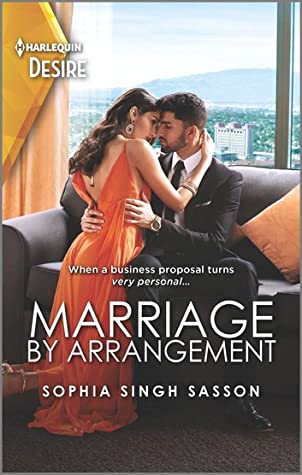 Rani Gupta has been languishing as a junior architect at RKS Architecture in Las Vegas. She has been dangling on the promise of a promotion for two years. And she finally has a shot at it with her design ideas for a new hotel by a rising hotel group based in India.

Arjun Singh is heir to a dynasty of hoteliers whose headquarters are in Rajasthan. He is also known as India’s hottest hottie with all its attendant adulation from the female half of the population. While his family is content to conquer the hoteling market in India, Arjun has his eye on a global empire. He has set his sights on Vegas as the first venture.

Arjun isn’t looking to build yet another bland Vegas hotel — he is aiming for something unique, which only someone who has done a deep research dive on him can envision. Rani’s Indian heritage and deep interior architectural talent allows her to translate Arjun’s ephemeral ideas into wood and marble and fabric. I loved reading about Rani’s design ideas, and how much they energize Arjun’s sense of “being home” — she brings historic royal Rajasthan to Vegas.

Rani and Arjun’s relationship is one of recognition of the other’s talent and success, how much they enjoying talking with each other on a wide variety of topics including their families, and how those frissons of attraction are quickly coalescing into a firehose of desire. Underlying that is a current of awareness of their common heritage that seeks to further bind them together. However, Rani’s previous experience with marriage to an Indian American man that had failed had made her very cautious about entering into another relationship with an Indian man. She is thus relieved when Arjun says that he wants only a temporary fling while he is in Vegas for the completion of his hotel. What he fails to tell her is that he has an arranged rishta waiting for him at home.

Sasson takes great care to show the reader the difference between Rani’s family’s middle-class Indian values and Arjun’s family’s khandani parampara — the dynastic, wealthy, upper cast Indian values. And Rani is caught among these two value systems and her own American upbringing as an, what Arjun calls, ABCD (American-born confused desi).

The last quarter of the book was the strongest section for me. It is easy to fall in love, but it is difficult to make a marriage. It is difficult to fit two lives together and set that within two families. The heart of this book is Rani and Arjun figuring out what they want to take a stance on, what they are willing to compromise, who will give what to whom, and who will decide what they cannot give up. Both Rani and Arjun mature through this process as they question their own values and what is important to themselves, and also think about the other person’s values and what the other person considers important.

What I really liked about this book is that Sasson not only shows how Rani and Arjun navigate these shoals between them but also how they consider both of their families at large. Because ultimately, Rani is right. Marrying an Indian means marrying their family. Sasson has skillfully used their exploration of what their parents and traditions mean to them to build character. They are who they are because of their families and culture. And so, marriage between them has to involve their families — in other words, everyone has to agree that this is a good match. At the same time, Sasson doesn’t allow her characters to forget that ultimately, it is the two of them who have to live with each other.

I loved Marriage by Arrangement, and I can’t wait to read Sasson’s next story that is going to be out in February 2021.

Keira Soleore writes for the International Examiner and Cogitations & Meditations. She enjoys connecting with readers on Twitter (@keirasoleore) and through her website (www.keirasoleore.com). Her interests include medieval manuscripts, philosophy, poetry, picture books, choir, sunshine and beaches. Keira is a pseudonym.
All Posts
PrevPreviousThe Alice in Wonderland Retelling You NEED
NextFrolic Podcast Network Weekly Wrap-up: Queen Move, Magic and More!Next