Book of the Week: Marry in Secret by Anne Gracie

[CW: miscarriage / loss of a child]

A new Anne Gracie novel is always cause for celebration. Marry in Secret is a wonderful story, where Gracie elegantly shows how a couple formerly in love but separated by supposed death face the fact that they still are married and have to go on with their lives. Should they take a leap of faith and work towards making their marriage a success or should they give up and seek an annulment? They have changed irrevocably in the intervening years, can they (should they?) overcome that? 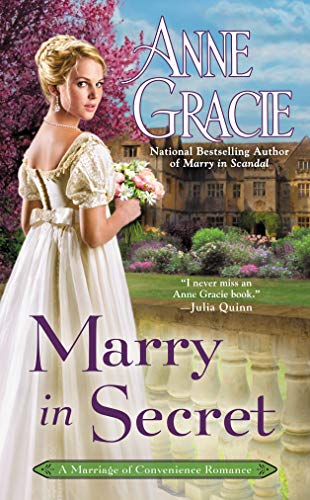 Lady Rose Rutherford used to be an impulsive, loyal, and happy teenage girl who threw herself eagerly into her passions. Now she is a young woman who is cautious in her thoughts and deliberate in her actions — so deliberate, in fact, that she agrees to a coldblooded arrangement to marry a glacial duke to secure a new life for herself and to provide him with an heir. She is convinced that love has no place in her life. As circumstances would have it, just as they are saying their vows, a wild man dressed in rags shows up to declare that Rose is already married…to him!

Rose and Thomas had married very young, before Thomas shipped out on a naval assignment. They were both so much in love that they hugged the emotion to themselves without letting anyone into their bliss, as though by sharing, it would lessen it. Rose was very aware that her young age – sixteen — meant that cooler familial heads would prevail upon her to disband her relationship, and she was determined that no one would separate her from Thomas. While Thomas was barely over twenty and at his core an honorable man, he was a man of deep emotions and was swayed by Rose to keep their marriage a secret from everyone for a little while.

Unfortunately for these young lovers, Thomas’ ship was lost at sea and all hands were presumed dead. Rose was devastated. She felt there was no point in divulging her marriage to her family now that Thomas had passed away. She was thus forced to grieve for Thomas all alone and in silence. Compounding her grief was the fact that she had become pregnant before Thomas had shipped out, and his loss caused her to lose their baby.

I was deeply moved by how Gracie tells the story of the young married Rose — all alone at a boarding school for young delicate virgins from wealthy families — who has buried Thomas in her heart and is having to deal with being pregnant and then suffering from a miscarriage. Gracie shows us, with such care and understanding, Rose’s heartrending physical loss as well as the emotional toll it takes on her. The scene where she tells Thomas this is heart-wrenching as is his reaction.

In his turn, Thomas is hesitant to share with Rose where he has been for the intervening four years, feeling that his story is not one for the gently bred and certainly not for one whom he had loved so fiercely and who is determined to love him still. With great care, Gracie shows us how he believes that he is irreversibly damaged — and the deep shame he feels at being enslaved and tortured and what he had to do to survive. Compounding that is the searing guilt he feels at being the one among the other enslaved sailors who has managed to escape to England. The scene where he tells her some of the bare bones of his horrifying story is one of great delicacy, and Rose’s reaction to him, with gentleness and acceptance, is a balm to his tortured soul.

What I liked best about this story is Rose’s positivity and belief in the marriage they had made. She does not take her vows lightly. She made them in good faith and in love, and while Thomas and herself have both changed significantly and irrevocably, she is willing to believe that they can seek new common ground and grow together through patience and understanding.  Despite being so young, they had both been able to see below the superficial surface of each other to the real person beneath. She is of firm belief that such a love does not die and can grow back stronger than before through the assiduous care and deliberate thought of two conscientious, mature people.

She is firmly convinced of this and is willing to be diligent in her efforts to save her marriage. She simply has to persuade Thomas to rise above his despondency to fight for them also.

Marry in Secret is a wonderful look at the dedication it takes to make a marriage work, and that, “I Love You” is just the beginning.

Keira Soleore writes for the International Examiner and Cogitations & Meditations. She enjoys connecting with readers on Twitter (@keirasoleore) and through her website (www.keirasoleore.com). Her interests include medieval manuscripts, philosophy, poetry, picture books, choir, sunshine and beaches. Keira is a pseudonym.
All Posts
PrevPreviousRomancelandia Dream Male Leads
NextSam’s Song Recs: A Playlist for Your Next Romantic Road TripNext