Book of the Week: Mr. Malcolm’s List by Suzanne Allain

The Honorable Jeremy Malcolm, second son of the Earl of Kilbourne, is handsome and wealthy and the greatest catch of the Season. But he is determined to not be caught. He has a list of requirements in the lady on whom he will confer the honor of being his wife: amiable & even-tempered; handsome of countenance & figure; candid, truthful & guileless; converses in a sensible fashion; educated herself by extensive reading; a forgiving nature; charitable & altruistic; graceful & well-mannered; posses musical or artistic talent; has genteel relations from good society. 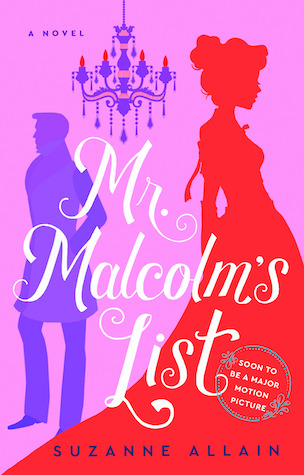 In the words of Lizzy Bennet to Mr. Darcy in Pride & Prejudice, “I never saw such a woman. I never saw such capacity, such taste, and application, and elegance, as you describe, united.”

Dear Readers, you can see where this is going. The Honorable Jeremy Malcolm is set to have his backside handed to him.

Full of good humor and period details, Mr. Malcolm’s List by Suzanne Allain is a thoroughly enjoyable story of how a smart, bright young woman brings this arrogant, pompous darling of the ton to his proverbial knees, and in so doing, confers upon him the honor of becoming her husband.

Selina Dalton is the daughter of a vicar of a small but comfortable living in the Sussex countryside. After finishing up with a school for ladies, for three years, she has been a companion to an elderly lady in Bath, who has now passed away. Since her parents cannot afford to give her a season in London, she writes to her friend from school requesting a short stint in London with her in hopes of making a suitable match. Selina doesn’t hold out much hope for anyone interesting back home, so her friend’s invitation is a welcome reprieve.

Lo and behold, when she arrives, she finds herself in the midst of a Shakespearean plot. It goes against the grain for her to embark on a deception, but her situation is untenable, so she reluctantly acquiesces. Her friend has set her up to be the downfall of Mr. Malcom’s pride. She is to somehow beguile him into paying marked attention to her and then somehow reveal that she also has a list of requirements and that he does not meet her qualifications. Selina doubts whether she has the wherewithal to attract someone as fastidious and refined a gentleman as Mr. Malcolm.

Then they meet. And lists go out the window.

The more they meet, the more they fall under each other’s spell. The more various items on Mr. Malcolm’s list get checked and crossed off, the more he realizes that Selina is the one he wants, not a mythical wife. Selina, by turns, remembers her role in her friend’s drama and discards her role to be authentic to her feelings for Mr. Malcolm and what she perceives are his feelings for  her.

The last quarter of the book is the heart of the story where we see an acceleration in Mr. Malcom’s humility with a corresponding deceleration in his sense of superiority. As his mother states categorically, “You have bungled it.” Both are in the love with each other. Both have awareness of that fact. But then a misunderstanding ensues, and Mr. Malcolm repudiates Selina in high dudgeon without listening to reason. Upon dimly realizing his error, he tries to, arrogantly, make amends, only to realize that she is not taken in. He has not atoned enough. And the more he atones, the more he realizes how much he has to atone. And thus, we see the power balance shifting between them from him to her till the end when it equalizes (though it will always be slightly tilted in her favor).

What I found interesting in this story is Allain’s exploration of how a feeling of superiority hides the lack of trust issues Mr. Malcolm has in his own ability to make a good, lasting match for himself. Hence the list. He wants to control the situation down to the brass tacks so he can reduce his anxiety, only to discover that the more vulnerable he is, the more rewarding is Selina’s regard.

Told much in the style of a traditional Regency, this book is a delight!

[To further whet your appetite, watch the “Overture” film to the story on the author’s website.]

Keira Soleore writes for the International Examiner and Cogitations & Meditations. She enjoys connecting with readers on Twitter (@keirasoleore) and through her website (www.keirasoleore.com). Her interests include medieval manuscripts, philosophy, poetry, picture books, choir, sunshine and beaches. Keira is a pseudonym.
All Posts
PrevPreviousJuly Horoscopes and Book Recs!
NextThe Perfect Playlist for a Summer Road TripNext