Book of the Week: One Bed for Christmas by Jackie Lau

Jackie Lau’s books are like a cozy blanket, full of warmth and tenderness, in which you just want to linger. Now imagine a book set around Christmas, and this feeling is multiplied many times over. One Bed for Christmas is a short novella that occurs over a handful of days. 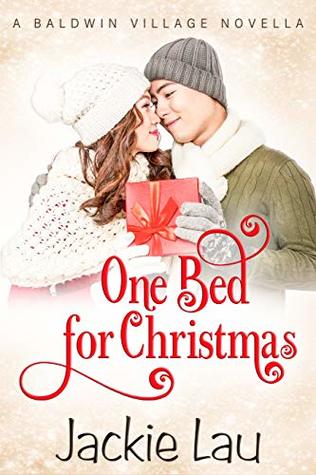 Wes Cheng met Caitlin Ng when she hit his head with the classroom door and knocked him to the floor in an undergrad calculus class. He fell hard on the floor and hard into love with Caitlin once his head stopped spinning. And for twelve long years, he has hidden his love for her but given her unstinting friendship. He knows that she is meant for better things than him and he doesn’t deserve her.

When the story opens, Caitlin is the CEO of a popular online dating app, while Wes is a freelance graphic designer and makes money on the side by dancing to the tunes of an elderly barbershop quartet in an inflatable T-Rex costume. The gulf between them is vast and unbridgeable. And yet, they are friends, of a sort. They see each other casually and spend time together, and it is always fun. But then Caitlin departs, not to be heard from till the next time.

In the meantime, Caitlin dates high-powered, successful men like her. What Wes does not know is that those relationships are fleeting because she can never connect with them. She feels she is doomed to not be successful in the love department because she is too driven, too successful, and that keeps men at bay, or they want to dominate and subjugate her. She feels that Wes is too busy dating other women to even have sufficient time to spend with her.

A few days before Christmas, Caitlin has had it with her own company and heads over to the pub where Wes is performing with the quartet. As the evening advances, so does the snowstorm, and Caitlin finds herself staying with Wes.

And finally, finally, she starts noticing Wes, not merely as a friend but as an individual. His gentleness, his solicitude towards her, his gorgeousness…and for the first time, she feels seen and understood and cared for. She realizes that she could easily fall for someone like Wes, who is sweet and affectionate and fun to be around.

But Wes has lived with insecurity for so long that even when he is handed the most important gift of Caitlin’s desire for a relationship with him, he spurns it.  Lau does not wave a magic wand and waft Wes’ insecurity away. She lets him sit with the distress of what that inadequacy is doing to him and to the most precious thing in his life. He has suffered unrequited love for so long and considered himself undeserving for so long that the habit is hard to break. It takes him a while to believe in his good fortune.

Their makeup scene is typical Lau: funny and tender and goofy. I’ll leave it for you to read and find out for yourself.

Keira Soleore writes for the International Examiner and Cogitations & Meditations. She enjoys connecting with readers on Twitter (@keirasoleore) and through her website (www.keirasoleore.com). Her interests include medieval manuscripts, philosophy, poetry, picture books, choir, sunshine and beaches. Keira is a pseudonym.
All Posts
PrevPreviousExclusive: Cover Reveal of Close to Me by Monica Murphy
Next#TBT Book Recs: Minnesota ChristmasNext