Book of the Week: So Forward by Mina V. Esguerra

Young poet Gaby Comprés has written: “stories, we all are stories, we are books longing for someone to look beyond our covers and turn our pages and read the ink tattooed on them. we long to be seen, we want to be read and understood and loved. we are hoping to become poetry to those hearts that see us, something beautiful and unforgettable.” 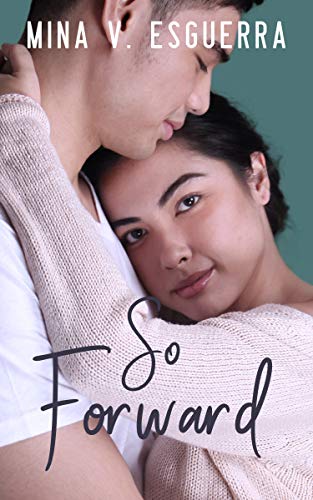 This is what I thought of as I read So Forward by Mina V. Esguerra.

Alexandra “Lexa” Lorenzo is a faculty-on-leave from Anselmo Graduate School (AGS) and current senior manager of shared services communications at Basco Lorenzo Group, a family-owned, highly successful company. She is a shoo-in for the CEO role of the real estate division, after her tita. The only problem is her public image.

All her life, Lexa has been told that she is tough and suplada (difficult, unfriendly) — she is never the sweet one, the cute one, the nice one. She knows that people believe she is scary and aloof. While she is ambivalent about wanting to change this commonly-held perspective of her, she does want the top job at Basco Lorenzo, and Filipino companies need to see their managers being friendly and enjoying themselves at parties before they can be liked and trusted. Esguerra has done a good job of showing how this belief in her toughness, has allowed Lexa to succeed on the rink as a Philippine national women’s team ice hockey player, but it has done a number on her mind. She believes she is unlovable.

Colin Valerio is the darling of the rink as a nationally renowned figure skater of the Philippines, who has a fetish for posting, wildly popular, shirtless photos of himself on Instagram. Now that his skating days are over, he makes money with an on-off modeling career and a marketing job for an underwear brand, which subsidizes his MBA at AGS.

Colin thinks people look at him and assume he is empty-headed. Esguerra does a wonderful job of showing Colin’s vulnerability. On one hand, he has legions of fans who swoon over him online and in public. And yet, privately, he is insecure about who he is without that adoring horde. So in order to not disappoint others, or himself, he keeps his graduate student persona a secret from most people. What if his Strat (like a Capstone project) paper fails and he does not get his degree? Better to surprise people with his success than to confirm their established opinions with his failure.

What I like best about Esguerra’s work is that her protagonists don’t wallow in their misery. They’re “take charge” people who take steps to effect change in their lives. I enjoy reading about people who do not wait around for an ex deus machina act to rescue them from their current life situation in which they are stuck, but rather, transform themselves through their own actions.

Having said that, Esguerra adds complexity to their situation by having Colin and Lexa be the perfect foils for each other’s strengths and weaknesses. With the other, each of them feels they can be vulnerable and open with their secretly-held wishes and dreams. This is the heart of So Forward. With each other, they feel seen and heard and understood. And valued.

I have always enjoyed Esguerra’s books, and I look forward to her next story.

Keira Soleore writes for the International Examiner and Cogitations & Meditations. She enjoys connecting with readers on Twitter (@keirasoleore) and through her website (www.keirasoleore.com). Her interests include medieval manuscripts, philosophy, poetry, picture books, choir, sunshine and beaches. Keira is a pseudonym.
All Posts
PrevPrevious5 Reasons the Shadow Game Series is Your New Obsession
NextLove YA: Top 3 Y.A. Reads for the Week of July 28thNext