Book of the Week: The Awakening of Miss Henley by Julia Justiss

My first love in romance novels is the Traditional Regency. It is narrow in focus and short in length and tightly concentrated on the couple and their unfolding relationship. The 1970s through the early 1990s were the heyday of these trads, so it was such a delight to see a trad written in 2019. Justiss has penned a marvelous book with The Awakening of Miss Henley and I loved it to pieces. 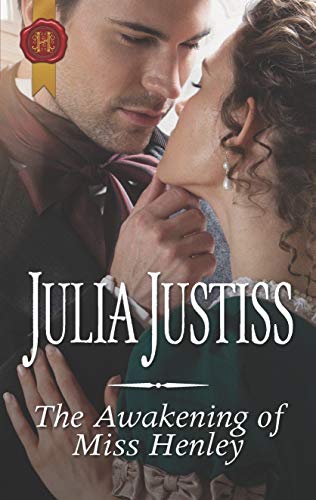 Emma Henley is well-dowered but unfortunately saddled with the moniker: The Homely Miss Henley. She is convinced that her plainness may not inspire a man to ardor, but she refuses to embrace her fate of house and children while her husband pursues pretty women. She also refuses to take on a useless fribble for a husband — she is interested in one who believes a wife is his equal and supports her involvement in the reform movement. Since this is highly unlikely in the ton, she is, instead, determined to use her competence to set up a separate household along with her two close friends and become a member of the political Ladies’ Committee and a benefactor of a boarding school for indigent girls off the streets.

Lord Theo Collington is a charming wastrel endowed with the moniker: The Incomparable Lord Theo. Drinking, gaming and wenching are the worthy pursuits of a gentleman, his father preaches and Theo embraces. Of marriage he believes that if he were ever forced to marry, he would be stifled by a woman who wished him to dance attendance on her. He cannot imagine being faithful to any woman. Lately however, he has been plagued by ennui. His acquaintances with their crass remarks, drunkenness and wasteful spending and the young matrons with their roving eyes have become tiresome. He is also continually bedeviled with longing for paper and charcoal, canvas and paints — pursuits that are ungentlemanly, his father preaches.

Emma thinks Theo’s a rake who uses his glamor to cozen the unwary. He thinks she’s too uptight and a do-gooder. However, the only enlivening aspect of their social evenings is the acerbic comments and astute observations of society and each other they make in each other’s company in ballrooms across London. Jovial banter and laughter punctuate their conversation. Their interest in each other beyond friendship creeps up on them by degrees — so slowly in fact that they are taken unawares.

These are the two people who are meant to achieve their happy ever after in this book. But, oh, how to reconcile their views on marriage! What, for the reader, seems to be an impossible situation is a challenge to which Justiss is equal.

What I loved best about this book is a conviction that is near and dear to my heart: People can and do change their minds and hearts to find deeper truths. This is true of real people and of characters reflective of people. I liked that Justiss holds a framing window for those naysayers in our society, so that they can look into this relationship to see how Theo has changed and how he woos Emma and convinces her that he has. She, in turn, is willing to consider that he might have changed and thus allows him to persuade her, all the while using the analytical side of her to ensure that she is not being snowed. Grand gestures are not for Justiss, but proving lasting devotion is, and for that, I was beguiled by the story.

An enduring point of fascination in romance novels for me is how a couple shores up each other’s confidence, makes the other believe in themselves and their capabilities, and encourages them to flout the societal niceties and emerge from the shell they have hidden themselves in. They show the other person how much more compelling they see them versus what they see in their own mirror, and thus, allow them to be more than they ever were before. Justiss’ skill in the writing craft allows her to show this with subtlety and sophistication. Emma and Theo have many insecurities to work through, but as the story progresses, they come to believe with certitude that they are worth more than they had previously believed. As Emma says, “We must all find our own path.” And so they do.

If, like me, you enjoy traditional Regencies, historical authenticity in details, complex and nuanced characterization, and excellent writing, this book is for you.

Keira Soleore writes for the International Examiner and Cogitations & Meditations. She enjoys connecting with readers on Twitter (@keirasoleore) and through her website (www.keirasoleore.com). Her interests include medieval manuscripts, philosophy, poetry, picture books, choir, sunshine and beaches. Keira is a pseudonym.
All Posts
PrevPrevious#TBT Recs: Witchy Style!
NextBree Hill Interviews Erotica Author Cass Ford on Sex Positivity and Her New BookNext