Book of the Week: The Gentle Art of Fortune Hunting by KJ Charles 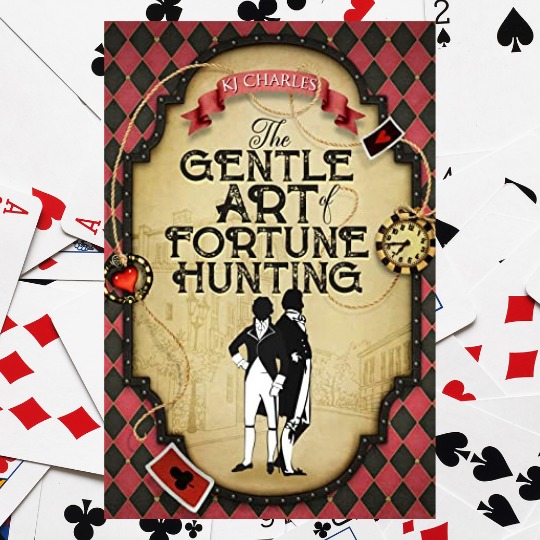 KJ Charles continues to write book after book of near perfection. Every time I think, she can’t get better, she does. She is a courageous writer who doesn’t shy away from morally ambiguous characters, where a protagonist can hold positive and negative traits in balance; sometimes one takes precedence over the other. The end is always positively sound while still retaining some of the ambiguity. Helen Keller has said, “What we once enjoyed and deeply loved we can never lose, for all that we love deeply becomes part of us.” I have taken Charles’ books to heart. 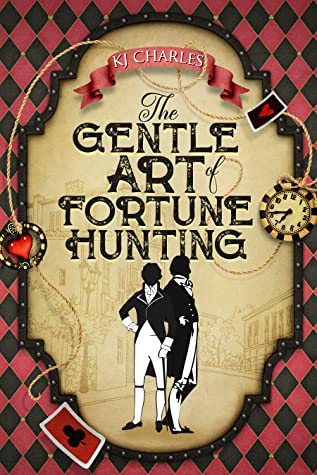 In The Gentle Art of Fortune Hunting, Charles has constructed an artful dance of nuanced plot, character precision, and thoughtful writing.

Sir John Hartlebury “Hart” is a baronet, a prosaic member of the Upper Ten Thousand with a good-sized property, and also a merchant efficiently managing his sister’s brewery. He is a large man with a large voice, who couldn’t be bothered to temper his views or mind his manners when in company. He retains an avuncular interest in the future of his niece, wanting her to acquire some town bronze, while safeguarding her fortune from the hands of fortune hunters.

Robin Loxleigh is a gazetted fortune hunter. He and his sister, Marianne, make no bones about them being down on their luck and from a small village in Nottinghamshire, here in London to make advantageous marriages. They charmingly cozen everyone into thinking them to be harmless, so Society casts a benign eye over their machinations.

Robin and Hart meet when Robin inveigles himself into the notice of Hart’s niece. Hart is instantly suspicious of Robin’s background and motives and sets detectives into digging up dirt on him. In town, he keeps an eagle eye on him and his doings. Deciding to corner Robin into a tight spot, Hart destroys him over a game of piquet to the tune of four thousand odd pounds. The next day, Robin arrives at Hart’s house penitent and defiant over his inability to pay. He leaves with an unholy bargain: his body for a month in exchange for forgiveness of his debt. That entire scene of negotiation is a master class in the subtle use of words juxtaposed with the shifting undercurrents of the unsaid.

Aristotle has said that a flourishing human life requires friendship, and in Hart, Robin finds that friend with whom his soul is deeply aligned. The friendship allows him to be more in tune with who he is and who he wants to be and what he wants and doesn’t want to do. In a sense, Robin becomes more Robin against the bulwark of Hart’s presence and acceptance. Hart, in turn, finds a friend who brings forth a hitherto unknown aspect of himself to light; something so hidden deep in his psyche that his conscience assumed he was unaware of it. But once that sexual facet of his personality is foregrounded, it is all he can think of. And while he is deeply afraid of it and shrinks from it being a part of himself, in Robin he finds his salvation and acceptance.

At no point does Charles shy away from the grim reality of the Regency era where sexual congress between two men was termed sodomy and was punishable by death. Before their relationship, both men had always lived in lively fear of their “crime” being discovered by the law from a complaint by one of their partners. Thus initially, their love scenes are touched by a moody melancholy; the protagonists fully aware how soon they will be over and how they must be secured before they crumble. But over time, they discover joy and that they can relax into the security of being valued by their partner, their friend, who was not going to betray them. Loving comes easier to both the men, trust…slowly. And what could be more precious than utter trust?

What I absolutely loved about this book is that Charles doesn’t rush her protagonists into a relationship. And there is no sense of “he is the one” from the beginning. Her approach is always to let her characters lead the way, instead of she, authorially, pulling them along. She keeps the protagonists, and the reader, poised on the edge of a blade, afraid to fall over into a relationship but in pain over the status quo. In this book, for long agonizing chapters, neither man even thinks about a potential relationship with the other. There’re just chance remarks of them paying keen attention to the other — breathing in the essence of the other’s presence. And so it is in these small moments that Charles’ protagonists build a relationship, careful and controlled, ever afraid to step wrong.

I enjoy Charles’ wry commentary on Society in her books. In The Gentle Art of Fortune Hunting, she pokes fun at Society’s superficial ways, where they take beautiful, well-dressed and well-mannered people to their collective bosom. You must have either wealth or beauty in order to be socially successful in the ton; the wealthier and more beautiful you are, the more the approbation.

Charles’ writing has exquisite details placed at just the opportune moments to construct an engrossing whole. In an offhand remark by Hart, we discover than Robin and Marianne’s names, surnames, and place of birth are all associated with the legend of Robin Hood, thereby immediately raising the suspicion that their identity is all false — thumbing their noses at Society, who are guilelessly taken in.

If you have never read a KJ Charles book before, you have really missed out on fantastic stories. You can start with The Gentle Art of Fortune Hunting, which is a standalone book. I cannot recommend this book highly enough.

Keira Soleore writes for the International Examiner and Cogitations & Meditations. She enjoys connecting with readers on Twitter (@keirasoleore) and through her website (www.keirasoleore.com). Her interests include medieval manuscripts, philosophy, poetry, picture books, choir, sunshine and beaches. Keira is a pseudonym.
All Posts
PrevPreviousAn Animal Rescue Roundup by Michelle Major
NextHow to Celebrate National Poetry Month by little infiniteNext