Book of the Week: The Marriage Game by Sara Desai

I enjoyed reading The Marriage Game by Sara Desai. It strikes the right balance between humor and angst, fluffiness and seriousness. Desai has done a wonderful job showcasing Indian culture — it informs every aspect of the book and makes for a complex and entertaining story. The humor and banter in this book are superb — they had me in stitches in parts. Desai does enemies-to-lovers so believably well. 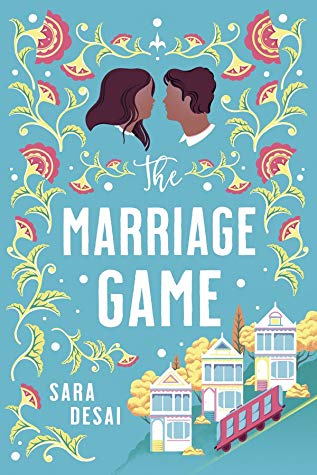 Layla Patel has returned home to her parents after disaster overtakes her career in New York. She plans to ground herself in her childhood home, above their Michelin-starred restaurant, and launch her own recruiting agency. But all is not well at home and the coveted peace, she had hoped for, is nowhere to be found. Her father has a heart attack, and she discovers that the restaurant is in financial difficulty. And to compound the difficulty, the supposed rent-free office her father gave her already has an occupant with whom she is supposed to share. Sam Mehta is the CEO of a corporate downsizing company, and he, too, is not happy to share an office.

This book is about personal growth for both Layla and Sam before they can grow together as a couple. For her, it is coming into her own personality and values and standing strong as her independent self. For Sam, the road to recovery is fraught with him having to forgive himself and be self-compassionate. He has taken on guilt and grief because of his family, and it is time for him to relinquish that burden before it destroys him.

The juxtaposition of Layla’s involved family and Sam’s totally uninvolved one is very well handled. Layla’s dad is a hoot. His well-intentioned but totally interfering and dominating methods to secure a husband for Layla were over-the-top and perfect for the story: He sets up a secret online dating profile for her and then scans hundreds of profiles and curates a list of ten men for her of whom he approves. He even sets up dates with them. The only thing he doesn’t do is go on the dates with Layla. (Sam does instead — to great comedic effect.)

Food is a great character in this book. I loved all the lavish details of the dishes. Desai uses food creatively, not only as nourishment, but also to showcase emotions and, of course, culture and social mores.

The Marriage Game is a debut book by Desai, and it’s a great start to her writing career. I look forward to reading what she has next in store for her readers.

Keira Soleore writes for the International Examiner and Cogitations & Meditations. She enjoys connecting with readers on Twitter (@keirasoleore) and through her website (www.keirasoleore.com). Her interests include medieval manuscripts, philosophy, poetry, picture books, choir, sunshine and beaches. Keira is a pseudonym.
All Posts
PrevPreviousDaily Frolic: Never Have I Ever Season Two!
NextWhat to Read: Frolic’s June Book StackNext