Book of the Week: The Return of the Disappearing Duke by Lara Temple

For some books, you know within the first few pages as you sink into the story that it is going to be very good. Lara Temple’s books have that quality but especially this one. The Return of the Disappearing Duke is a deeply philosophical book — those scenes in the Egyptian desert rise almost to poetry. 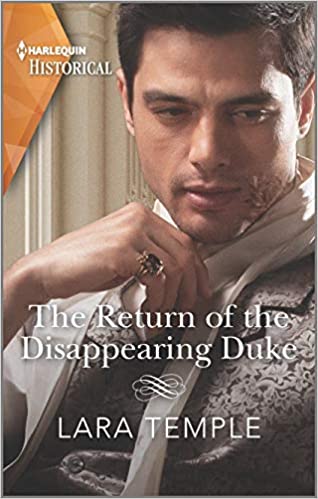 Colonel Raphael, the Duke of Greybourne AKA Mr. Rafe Grey, ran away as a teen from his abusive father and stern, indifferent mother to the army. From there, he became a wanderer and mercenary for hire. At one point he did return to England to support his younger brother and his newborn son. But the death of his nephew sent him out wandering again. At the moment the story begins, he is on the trail of his brother who has disappeared in Egypt.

Cleopatra “Cleo” led a circumspect life until her teen years with her loving mother and largely absent father. When her mother died, her father’s absence put her and her younger brother in the orphanage for a year, before he sent for his son. But Cleo disguised herself as a boy and went with her brother to her father, who was not best pleased to be saddled with a girl in his global nomadic exploration of antiquities — real and fake — to sell to the highest bidders. His indifference towards his children makes for an unusual upbringing and accounts for much of Cleo’s mistrustful personality. She never knows when someone will betray her and seeks to be on guard at all times.

Cleo and Rafe meet when Cleo propositions Rafe — offering to pay him with an emerald — for his offices in getting her from Syene to Cairo. She is seeking to escape the men the French antiquities mastermind has set on her and to find her brother who disappeared after the death of their father. She’d managed to escape the evil men from Meroe to Syene, but now decides to seek help from this English mercenary for the final, riskier trip into the big city.

This is a deeply sensual book, in the sexual sense and in all types of sensorial detail. The romantic tension between Rafe and Cleo comes not from just their attraction to each other, but also from their surroundings at every stage of their journey and how they react to them. You see this when they are in Egypt but also in England — Temple skillfully reveals character through these details.

This book has a marvelous sense of discoverability because Temple doesn’t tell you what to think and feel about the story and the characters, rather, she subtly shows you what the characters are thinking and feeling and doing. Here is an example. We learn that Cleo finds Rafe’s captain friend very attractive. But she is not remotely attracted to him. The first is an objective assessment whereas the second is an emotional attachment. It is scarred Rafe who sets her senses on fire, not the handsomer captain. Beauty is so much a case of emotions coloring what the eyes see.

In the course of their lives, people inevitably examine their own motives for what they do, that is, they examine the pylons of who they are. This is necessary before they can approach a relationship with the fullness of self-awareness. Temple shows us this beautifully in Cleo — how her sense of who she is grows over the course of the book. Her years with her father had stunted this growth because she was so busy merely coping with all that he was throwing at her. Now since his death, for the first time, she has the emotional capacity for self-examination and self-growth.  And this process of self-discovery allows her to catch the first tendrils of warmth and affection she feels for Rafe.

Trust between two such wary strangers is prickly at first, and comes in fits and starts. If Temple had put just these two together on their journey from the Egyptian desert to rainy London, they would have never made it out of the desert. But having their camel herder and Rafe’s batman there helps ease some of the tension between them. Seeing how each of them is with other people makes them find the other more trustworthy, and thus trust slips in through the nooks and crannies of their closely guarded mistrust.

Just as trust is making its way into their heart, so is love. For two such emotionally cautious people who withhold acknowledging their emotions to even themselves, to then open up to sharing them with the other person is the emotional journey that spans this book.

The Disappearing Duke has all the hallmarks of a great book. The sensitive, nuanced writing allows for a myriad of emotions, sensorial details, and complex characterization to be expressed in a paucity of words.  Most certainly, a book to treasure.

Keira Soleore writes for the International Examiner and Cogitations & Meditations. She enjoys connecting with readers on Twitter (@keirasoleore) and through her website (www.keirasoleore.com). Her interests include medieval manuscripts, philosophy, poetry, picture books, choir, sunshine and beaches. Keira is a pseudonym.
All Posts
PrevPreviousFrolic Podcast Network Weekly Wrap-up: Fairy Tales, Parks & Rec and More!
NextLove YA: Top 3 Y.A. Reads for the Week of August 25thNext