Book of the Week: The Ruin of Evangeline Jones by Julia Bennet

Julia Bennet’s book The Madness of Miss Grey was on my Best Books of 2019 list, and so I was eagerly awaiting this book. The Ruin of Evangeline Jones is superb, and Julia Bennet is now on my must-read list of authors. 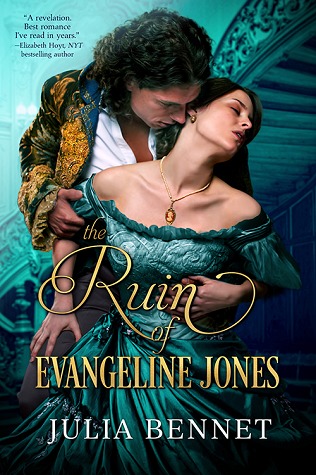 Alex, the Duke of Harcastle has made it his mission to flush out charlatans who separate clients from their money through fraudulent séances. He does not believe in spirits or spiritualists. He has acquired something of a reputation for being successful in the unmasking of a few mediums. Other than his zeal for this, he considers himself an aloof man. He has no intimates outside his family, partly because he is reserved and partly because his rank is so daunting.

Evangeline “Evie” Jones was a much sought-after medium in London. Séances always exhaust her but that is the only thing she has been trained to do in her life. She owes everything to Captain who had rescued her as a young child from a brothel. And he demands complete obedience and obeisance from her. His every whim is her command, and she is in thrall to him.

Alex has a secret. He has a naughty photograph of Evie that he accidentally found in one of the print shops of London. The photograph so fascinates and arouses him that he carries it around in his pocket like a talisman and communes with it in his leisure times.

Evie and Alex meet at one of her séances, and knowing his reputation, she holds her anger in check and presents an icy competence and contempt. He is confounded by this woman and the voluptuous one in the picture who he feels he knows well. He thinks he is the master of the situation, therefore, he is outraged — and terrified — when she turns the tables on to him by channeling the spirit of his cruel, despotic, abusive and very dead father. He is certain she is a fraud but also clever and well-prepared. She is shocked at the anguish she sees in one so controlled, and she knows that he is going to make her pay for that vulnerability.

From this nadir of their non-relationship, Bennet has them build an enduring relationship of trust and openness. On the surface, the story is about how Alex loses his distrust in Evie by degrees even as she warms up to him, aided along by an explosive attraction. But with Benet there are always many layers to a story that you have dig deeper to explore. Why does the Captain have in it for Alex? Can she break her deep-rooted loyalty to the Captain? What will the Captain do to her if she throws him over to protect Alex? How will the Captain exploit her and Alex’s deep feelings for each other?

Exploration of the risks and challenges, tenderness and sweetness of love are what Bennet does superbly well in her work. Her characters alternately beguile you and confound you, cause your heart to ache for them and outrage you, but ultimately, they convince you, without a shadow of a doubt, that these two people are uniquely bound to each other in a forever love.

The Ruin of Evangeline Jones is a book worth savoring. Highly recommended. I am looking forward to what Bennet has in store next for her readers.

An aside: I laughed at the tongue-in-cheek first line of the book: It began, as so many stories do nowadays, with a duke.

Keira Soleore writes for the International Examiner and Cogitations & Meditations. She enjoys connecting with readers on Twitter (@keirasoleore) and through her website (www.keirasoleore.com). Her interests include medieval manuscripts, philosophy, poetry, picture books, choir, sunshine and beaches. Keira is a pseudonym.
All Posts
PrevPreviousExclusive: The Forever Girl by Jill Shalvis Cover Reveal
NextExclusive: Heart on a Leash by Alanna Martin Cover RevealNext