Book of the Week: Ties That Tether by Jane Igharo 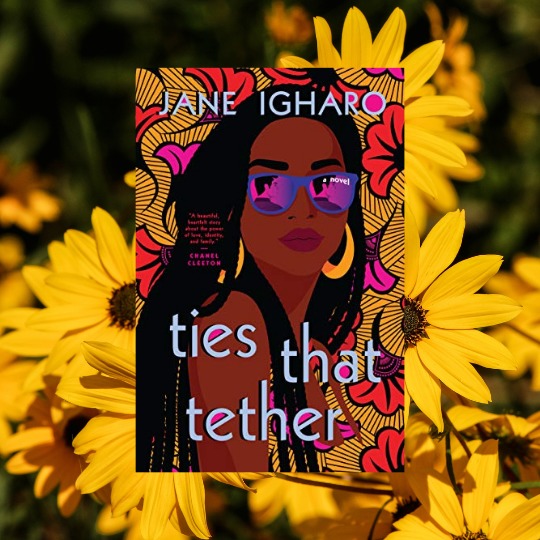 Nigerian-Canadian Azere Izoduwa works at Xander in Toronto, North America’s top advertising agency. She was born in a Nigerian village and immigrated to Canada with her mother and sister at the age of twelve.

Spanish Canadian Rafael Castellano is in the process of moving back to Toronto from NYC where he spent a few years. His time in NYC is something that he adamantly refuses to speak about with anyone, even his close family.

Azere and Rafael meet when Azere escapes another date setup by her mother and ends up in the hotel bar feeling out of sorts and a bit reckless. Some conversation and a hot kiss later, their instant connection translates into a one night stand.

Only…Azere ends up pregnant. And Rafael ends up working for Xander. And from there, their relationship spools.

While Rafael understands the experience of being the child of immigrants and the necessity of blending cultures, his family is very accepting of whoever he dates. At one point, Azere specifically asks if he’s dated black women before and if they were fine with it. And he says, yes, assuring her of her welcome. On the other hand, Azere’s mother brings in the external tension to the story.

This pressure is the defining factor in Azere’s life and in Azere and Rafael’s relationship. They rise up to the challenge, rather than being bowed by it. They learn to cleave to each other and know that together they’re stronger than individually. Just as Rafael is Azere’s rock in this, she is his succor in his recovery from his past trauma. Igharo is a wonderful storyteller and shows the romantic arc of her story well. While Rafael is open with his I Love You, it takes Azere a while to grasp at the courage to say Ru Emwen Rue, as you would say in Edo Nigerian.

The best part of this book for me was Azere and her mother’s relationship. It is so fraught with the immigration experience. Her mother wants to hold on to what she knows, the memories and experiences with which she came to Canada and which she is so afraid her daughter will forget. And in forgetting the culture, she will forget her father and lose all that made Azere Izoduwa an Edo Nigerian. But her mother has never understood how difficult the first few days and weeks and months were for Azere when she first immigrated to Canada. At that age, acceptance of her peers meant having to conform to the cultural norms. She had to adopt new customs, behave in new ways, and think of herself differently, all of which were threatening to her mother.

And so at home, Azere became complaint with her mother’s expectations and outside the home with her peers’ expectations. It is only after meeting Rafael, that Azere lays the boundaries of who she is, not what others want her to be. Going against her mother’s command, feels like going against her very nature, but despite how her mother’s rejection tears her apart, she claims Caucasian Spanish Rafael as her future, not an Edo Nigerian.

Azere is proudly Nigerian and proudly Canadian. Just because she has adopted a new country and its culture, does not mean she has forgotten her old culture or what it means to be Nigerian. Azere tells her mother, “My village, my people, the traditions, the ancestral stories my father told are woven into every part of me, as deeply rooted as bone marrow.” How can she forget what is intrinsically a part of her?

The ending chapter has a beautiful philosophical section, where Azere thinks: I believe in destiny, but I strongly believe destiny isn’t all-powerful; it gives a portion of its influence to us. We have the choice to accept or reject its plans. And that is what Azere and Rafael do together. Together they stand against her family’s desire to bend their lives to their will and their plans, and in so doing, they stand up for themselves, and eventually, stand with her family.

Many YA books have coming-of-age stories for teens. Well, for many immigrant families, coming-of-age stories are for adults in their twenties, and sometimes, even in their thirties. It is a time of mature reflection when children of immigrants realize that they cannot live their lives as planned for them, but rather, they have to live the lives that are waiting for them, the ones they’ve crafted for themselves.

To read this book is to read it for the tenderness of the romance and for the immigrant experience, to feel your heart soften and your throat clog with tears, and to celebrate the resilience of the spirit. As Rilke has said, “To love is the ultimate human task.” So celebrate the love between the protagonists and within their families as you turn the pages.

Keira Soleore writes for the International Examiner and Cogitations & Meditations. She enjoys connecting with readers on Twitter (@keirasoleore) and through her website (www.keirasoleore.com). Her interests include medieval manuscripts, philosophy, poetry, picture books, choir, sunshine and beaches. Keira is a pseudonym.
All Posts
PrevPreviousWhat to Read: Michele Arris, Vanessa Riley and Nina Crespo Bring the Love
NextBuzzy YA Retellings Releasing This FallNext