Book of the Week: Unexpectedly Wed to the Officer by Jenni Fletcher 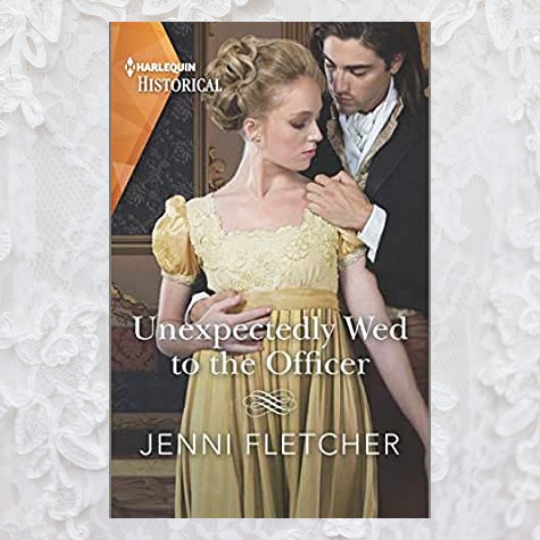 Set in Bath, Unexpectedly Wed to the Officer by Jenni Fletcher, is a lovely quiet story between a shopkeeper and an officer of the navy who is the grandson of a duke. They meet in a dramatic fashion in the middle of the night when she breaks his nose and knocks him on his backside. Surely, they were meant to fall in love?

Henrietta Gardiner runs the biscuit shop that has been in the Fortini family for two generations. Her beauty has led her into tricky situations with unscrupulous men and suspicious women, so she is wary of men who compliment her. Her family life brings her great sorrow. Instead of devoting his life to his young sons after his wife’s death, he is devoting his life to drinking. As a result, she is doing two jobs: running the shop and caring for the children in the evenings. One day, she finds out that he has run away and left the boys in her care.

What about her life? How is she to manage? Fletcher shows Henrietta to be of indomitable spirits. While she is distraught at her brother’s cavalier attitude towards her and his sons, she is firm in loyalty towards the boys. She was going to step up and be responsible and be the mother they needed.  But how was she going to manage the children, their needs, and her job?

Sebastian Fortini has recently left the Royal Navy and returned to dry land after many years, only to find that his mother and sister have fallen into the embrace of the much-hated aristocracy. His sister is now a countess. His mother has returned to her uncle’s house where her mother, the dowager duchess, resides. All his life, Sebastian has hated his mother’s relations for disowning her after she ran away with a footman turned baker. And now, he is bemused that his mother has reclaimed her heritage and expects him to visit there.

Fletcher has done an excellent job showing how conflicted Sebastian is about his loyalty to his parents. He loves his mother and had loved his father, when he was alive, as much as he has hated his mother’s family. He knows that his mother had been happy with his father in her marriage, but she had also been saddened by her family’s stance against her. So Sebastian finds it inexplicable how she has forgiven her family. He feels that if he were to accept her family, it would be a betrayal of his father, but holding on to his resentment would wound his mother. The only way to resolve the situation is by doing something he is extremely loath to do: visit them.

Many times, in romance novels, children act as precocious catalysts to the romance. Fletcher carefully circumvents that by having the children behave like children and have them be a natural part of Henrietta and Sebastian’s lives. They are united in their care of the children, and the children thrive in their affectionate company.

I really liked the slow development of their romance. Their relationship starts out adversarial but quickly changes into friendship, and as they grow closer, love blooms between them. I really enjoy stories where love happens over time and I see it unfold on the page. Fletcher does a good job of seeing the growing affection between them. Unexpectedly Wed to the Officer by Jenni Fletcher is a sweet treat of a book which is as much about each protagonist’s emotional journey as it is about their growing relationship.

Keira Soleore writes for the International Examiner and Cogitations & Meditations. She enjoys connecting with readers on Twitter (@keirasoleore) and through her website (www.keirasoleore.com). Her interests include medieval manuscripts, philosophy, poetry, picture books, choir, sunshine and beaches. Keira is a pseudonym.
All Posts
PrevPreviousExclusive: Acting Up by Adele Buck Cover Reveal
NextBite into This Vampire Romance PlaylistNext