Book of the Week: Well Met by Jen DeLuca

“Good morrow and well met” is a standard greeting every year I go to our local medieval faire. I have considered joining a Renaissance faire group as an active participant, so I fell in love with this book from the first meeting the heroine has with her small town’s Faire group. DeLuca’s expertise with how the Faire performances go and her love of all things Renaissance allows her to give the reader an intimate and immersive experience with the story and that is a rare gift. 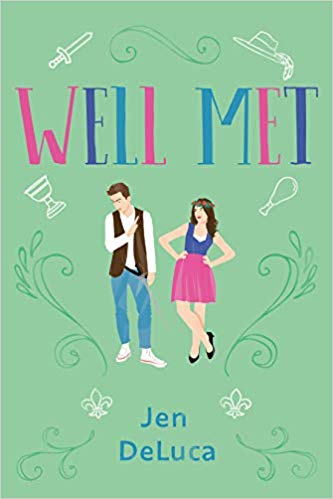 Emily Parker lost her fiancé and her apartment in one fell swoop when he skedaddled out of their relationship and town to his high-profile job in a big city. She had dropped out of college and worked two jobs to support his law degree, but now that he was an attorney, she was not good enough. Just as she is at loose ends, her older sister gets into a terrible car accident and is bedridden and needs someone to look after her and her teenager.

Family is important to Emily, so she moves kit and caboodle to the small town of Willow Creek and takes over home and hearth. Fixing things is what she does. Much to her dismay, this involves volunteering to take on a role in the local Renn Faire. Her reluctance increases when she finds her torso squeezed into a chest-expanding costume, but the small town friendships win her over. She likes being accepted and feeling like her presence matters to her family and to other people — she wants to be loved for who she is to them, not what she can do for them, at the same time, she enjoys being needed and making a difference in someone’s life.

Simon Graham has the weight of the Faire on his shoulders. He is overshadowed by the memory of his brother, whose brainchild the Faire was, and the brawny perfection of his long-time, some-time friend. Family is important to Simon, and in order to keep his brother’s spirit alive, he labors under an intense desire to keep every detail of the Faire exactly the same year after year. And that stress explodes in him causing him to lose his temper when he feels that someone is just phoning their performance in or not really vested in its importance. Given Emily’s initial reluctance to take on the role, they butt heads right from the get-go.

But as the actual Faire gets under way, their dramatic change from their real prickly, protective selves as Emily and Simon to lusty tavern wench, Emma, and her swashbuckling, kiss-stealing pirate, Captain Blackthorne makes for great storytelling, which DeLuca recounts with verve and a dash of style.

Emily has dealt with someone’s expectations of her and their disappointment in her in the recent past, so when Simon disparages her, she has a PTSD-like reaction to his disapproval — another man was putting her down for just being who she is and for what she cannot control. DeLuca puts the reader right in Emily’s shoes and makes you feel her emotions — the sadness, the feeling of being constantly overlooked, the feeling of not being considered valuable — and your heart bleeds for Emily every time she feels small.

And then DeLuca lets you see Emily’s growth as she learns to conquer her fears and set her boundaries to discover who she is and what she will and will not allow other people to say and do to her. Initially, it is in her internal monologue and then it is outwardly with Simon and others, and I applauded every time Emily stood up for herself. You see her growing confidence reflected in how Simon’s respect and appreciation of her grows. Simultaneously, you see Simon emerging from the grief and burden his vibrant brother’s death had put on him, and in turn, starting to discover who he is and who he isn’t. He becomes his own man in this story and that is wonderful change to see.

What is also fascinating is how their relationship starts out one-dimensional with “I dislike you,” that then transforms into “I misjudged him/her,” and coupling that with a rising attraction leads to “I think he/she is wonderful just as they are.” For a person to look beyond themselves and their own insecurities and issues to others and understand their vulnerabilities and strengths takes a mind shift that is characteristic of a growth in maturity.

With two characters showing growth from darkness to light in their own lives and also in their relationship, character development could be challenging and messy. But this is where the book shines. While allowing them and their relationship to grow, DeLuca handles the delicate power balance between them — who is feeling what and when, who is compromising and who is asserting themself — with a deftness and assuredness you don’t usually see in a début author.

DeLuca has made a splash on the contemporary romance scene with her first book, Well Met, and I can’t wait for her next book. She’s an author to watch!

Keira Soleore writes for the International Examiner and Cogitations & Meditations. She enjoys connecting with readers on Twitter (@keirasoleore) and through her website (www.keirasoleore.com). Her interests include medieval manuscripts, philosophy, poetry, picture books, choir, sunshine and beaches. Keira is a pseudonym.
All Posts
PrevPreviousLindsay Lackey: “I’m not nearly as guarded as Red, but I do think I have a much bigger internal life than I often show.”
NextEmily R. King: “The plotline morphed into a Batman-esque revenge story”Next