Book of the Week: When the Marquess was Mine by Caroline Linden

When the Marquess Was Mine by Caroline Linden highlights that it is possible for people to change, to grow, to become better people, and that people are not doomed to be endlessly repeating their unenlightened selves. We all fall into bad habits that we can’t seem to get ourselves out of until something happens that snaps us out of apathy and allows us to examine our life anew. 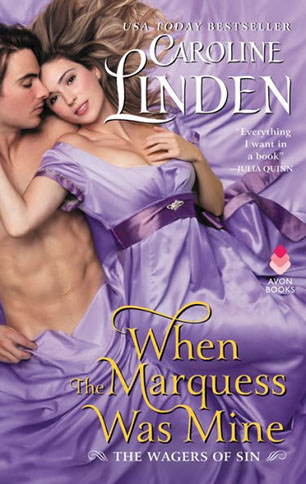 Robert “Rob” “West” Churchill-Gray, the Marquess of Westmorland is afflicted with high spirits and an acerbic tongue with which he eviscerates all within his graze. Lady Georgiana Lucas is one such victim and she rightfully hates him. She also resents his profligate and cavalier ways towards others, especially towards her dearest friend’s husband whose deed to his house West wins in a card game. Her friend’s husband proceeds to make West the villain of the piece.

As West is riding towards the manor he won — and wants to return after setting up matters so that the house cannot be carelessly wagered away again – he is set upon by thieves intent on inflicting physical harm on him and leaving him bleeding his life away in the dirt. When Georgiana realizes who the man she has rescued is, she is aghast and has to make a split decision: let her friend, who hates West, allow him to die, or save his life because he is human and deserves compassion. She decides to save his life by deceiving her friend by claiming that West is really her fiancé.

As West recovers his health, she discovers that he has lost his memory. Now she faces a conundrum: Should she reveal that he is not in fact her fiancé and thus impede his recovery by taking away the only thing anchoring his psychological state to the present or continue the deception for his sake. She chooses the latter.

As an amnesiac, West, the rake, become Rob, the gentleman: courteous, humble, charming. The change is as startling to Charlotte as it is beguiling. Rob’s romancing of her becomes the stuff of her dreams even though she has been in love with her real, but distant, fiancé since her girlhood. Every moment of her day is fraught with confusion, regret, and elation.

As the reader knows, deceptions have a way of being inconveniently revealed. And it becomes blindingly obvious to Rob that Georgiana has continuously and unflinchingly lied to him.

Unlike other amnesia plots in romance, Linden’s hero does not then utter a castigating denouement and hie off to his country manor in high dudgeon. Instead he takes time to think, to ask questions, to reflect on what has happened so far, and to wonder about her motivations, whether just or ill.

Both protagonists show a willingness to tussle with the details of the predicament they find themselves in. They are honest in their thoughts to each other and to themselves and she is aboveboard in explaining her actions. Only their feelings about each other, they keep carefully hidden — he, because she is engaged to another man; she, because she is engaged to another man and also because she fears that once all Rob’s faculties return he wouldn’t be interested and only find her a millstone around his neck.

Rob wants Georgiana desperately to be in his life and to go to his family home with him and she just as desperately wants to go herself, so the reader may well ask: Why doesn’t she? One word: Honor! She has made a promise to another man to marry him, and that man has entered into that engagement with her in good faith, and she feels that he does not deserve to have his fiancée run off with another man. Linden shows that it is not only the heroes in romance who have honor, but heroines make decisions out of their sense of honor as well, no matter how hard those decisions may be

And so they part ways. A clean break. And yet…they yearn.

But not foolishly or endlessly. They take charge of their lives, and that is what I liked about them. They consult their near and dear and then go about making wise choices to achieve the lives they want. Too many people wait for fortune to smile upon them. Not so, Linden’s characters. She has them make their own fortune. The penultimate scene is full of suspense and drama as it brings the build-up of the two protagonists to full bloom. They plan, they scheme, and then they achieve spectacularly.

Last week, my review of A Study in Scandal by Caroline Linden was published. The reason I wanted the review of that book and the review of this book to be published so close together is because they are linked by the Duke of Rowland. And these reviews are a look at the development of that father figure by Linden and the role he plays in the stories. The heroes in both the books are sons of the duke and he represents all that is noble in their characters. They are them because of him and they are not less because of him. Like I mentioned in the Scandal review, in most romance novels, fathers are killed off so that the sons can become heroes. But in Linden’s two stories, the father is an important anchor to these heroes’ lives and the women they bring into the family. It is the presence of this benevolent father figure that also lends the assurance of the HEAs, because not only are the protagonists in mature, stable, loving relationships with each other but also with the Churchill-Gray family.

When the Marquess Was Mine is an independent book and stands alone despite the connecting character and can be read without having read A Study in Scandal. Linden has been a new discovery for me with these two books, and I am so pleased. I look forward to her next books.

Keira Soleore writes for the International Examiner and Cogitations & Meditations. She enjoys connecting with readers on Twitter (@keirasoleore) and through her website (www.keirasoleore.com). Her interests include medieval manuscripts, philosophy, poetry, picture books, choir, sunshine and beaches. Keira is a pseudonym.
All Posts
PrevPreviousExclusive: Rage and Ruin by Jennifer L. Armentrout Partial Cover Reveal!
NextChatting with May McGoldrick on Co-Writing, Why the Past is Important and How Their Characters are Modeled After Real WomenNext