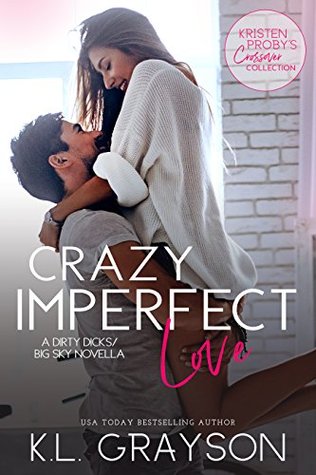 The Kristen Proby Crossover Collection features six of Proby’s favorite authors writing in her Big Sky series, and all of the books, including one by Kristen, released this week. I love this series, so I’ve had a ball seeing how some of my favorite authors tied their stories to Kristen’s characters and small-town Montana setting. It’s also been a great opportunity to read new-to-me authors, including Crazy, Imperfect Love by K.L. Grayson. This workplace romance is equal parts sexy, witty and heartfelt, and I am thrilled to welcome her to Frolic to talk about it and the Kristen Proby Crossover Collection.

Soaring with Fallon by Kristen Proby

Worth Fighting For by Laura Kaye

Nothing Without You by Monica Murphy

Hold On by Samantha Young

Mary: Welcome to Frolic, K.L.! I just finished Crazy, Imperfect Love and loved it! Can you tell readers a little about it?

K.L.: Hi! Thank you for having me! Crazy, Imperfect Love was such a palette cleanser for me. It’s a light, fun, simple romance about a young woman who is working her way through life and learning not to let her OCD tendencies control her. Abby is sweet and real and falls head over heels in love with Dr. Drake Merritt. I’ve been told by readers who’ve gotten an early look at Crazy, Imperfect Love that Drake is one of the “swooniest” heroes I’ve ever written.

Mary: What was it like to write in Kristen Proby’s Crossover Collection and set a book in the town Kristen created for the Big Sky series, Cunningham Falls, Montana?

K.L.: It was wonderful and so much fun. Kristen is not only an author I look up to, but she is one of my dearest friends. I read all of her books, so I found it easy to write the story in Cunningham Falls, because I was already so familiar with it and the characters.

Mary: Abby is cousins with Hannah, the heroine in Kristen’s Charming Hannah. Why did you pick Hannah as a character in which to tie Crazy, Imperfect Love to the Big Sky series?

K.L.: We actually didn’t pick Hannah, we picked Drake. When Kristen asked me to participate in the Crossover, and I said yes, we knew right away that I would write Drake’s book. I fell in love with his character in Charming Hannah and I had already written Abby in my Dirty Dicks series as a nursing student. It was a match made in crossover heaven. I just had to find a way to get Abby into Drake’s life and Hannah was the perfect connection.

Mary: Drake is downright swoony. Did you have an inspiration for his character?

K.L.: My husband. That might seem like a cliché answer, but it’s the truth. Abby and I share OCD tendencies and the compassion and acceptance that Drake shows Abby in the book is exactly how my husband treats me. He’s patient and lets me work through my obsessions and compulsions and doesn’t rush me, tell me stop, or make me feel weird. He accepts my quirks and if he feels like I’m doing something too much (i.e. checking the alarm clock more than ten times) he’ll try to distract me and reassure me that everything is good.

Also, when I wrote Drake, I knew I wanted him to be a really great guy with a heart of gold. He’s strong and knows what he wants out of life and isn’t afraid to go after it. He’s also friendly, funny, smart, and kind. I tried to write him as the type of guy any woman could fall in love with.

Mary: What do you do when you get stuck while writing?

K.L.: I keep writing. I push the words out even if they suck, even if I have no idea how to move the story forward, knowing that I can always go back and fix them. Most of the time, if I can keep my fingers moving and mind working, I will eventually push through whatever struggle I’m having.

Mary: What book have you reread the most?

K.L.: Wow, this is a hard one to answer because I re-read books more than I buy new ones. It’s probably a triple tie between About That Night by Julie James, Worth The Fall by Claudia Connor and Double Play by Jill Shalvis.

Mary: Tell us one thing about yourself that might surprise people.

K.L.: Abby is me. All of her obsessions and compulsions are my obsessions and compulsions. I check, double check and quadruple check everything both in the medical field (I’m a Family Nurse Practitioner) and out of it. I obsessively check to make sure the stove is turned off, the refrigerator door is shut, my curling iron is unplugged, and the alarm is set (all things Abby did in Crazy, Imperfect Love). I promise you I’m not crazy, I just have an irrational fear of being the cause of bad things happening and the type A / perfectionist part of personality calms that fear by constantly checking and rechecking myself.

It was fun giving those parts of myself to a character and seeing the way readers embrace Abby and her quirks. I’ve already gotten so much feedback and so many messages regarding Abby’s OCD tendencies.

K.L.: I have an all new standalone titled Stay With Me that will release wide on April 23rd. It’s a second-chance romance about a divorced, single-mom and a damaged country music star.

Abigail Darwin needs one thing in life: consistency. Okay, make that two things: consistency and order. Tired of being shackled to her obsessive-compulsive mind, Abigail is determined to break free. Which is why she’s shaking things up.

Fresh out of nursing school, she takes a traveling nurse position. A new job in a new city every few months? That’s a sure-fire way to keep her from settling down and falling into old habits. First stop, Cunningham Falls, Montana.

Laid back, messy, and spontaneous, Drake is everything she’s not. But he is completely smitten by the new, quirky nurse working on the med-surg floor of the hospital.

Abby puts up a good fight, but Drake is determined to break through her carefully erected walls to find out what makes her tick. And sigh and moan and smile and laugh. Because he really loves her laugh.

But falling in love isn’t part of Abby’s plan. Will Drake have what it takes to convince her that the best things in life come from doing what scares us the most? 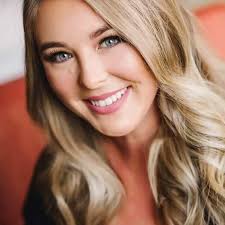 K.L. Grayson resides in a small town outside of St. Louis, MO.  She is entertained daily by her extraordinary husband, who will forever inspire every good quality she writes in a man.  Her entire life rests in the palms of six dirty little hands, and when the day is over and those pint-sized cherubs have been washed and tucked into bed, you can find her typing away furiously on her computer.  She has a love for alpha-males, brownies, reading, tattoos, sunglasses, and happy endings…and not particularly in that order.

Mary Dubé is a displaced Texan, former burrito roller and retired number cruncher now living and reading in sunny California. When she’s not adding to her keeper shelf, she can be found teaching indoor cycling, bookstagramming, volunteering and pretending not to hoover over her teenager.
All Posts
PrevPreviousHappy Pi Day: Science is Sexy!
NextRereading to Fall for Reading AgainNext