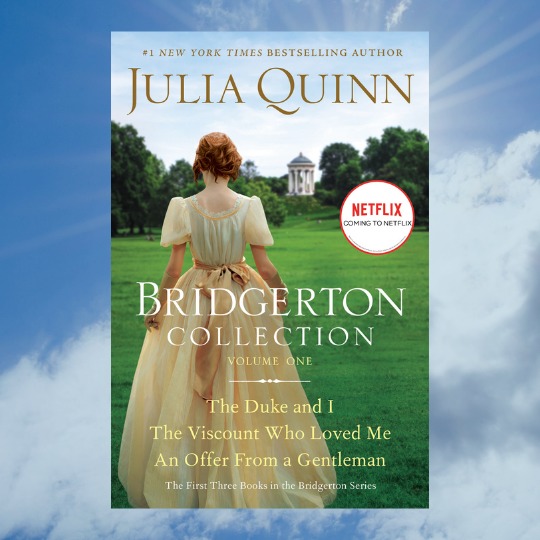 [Note from Frolic: Today, we welcome Romance at a Glance to the site! They’re talking all things Bridgerton. Take it away!]

The Bridgertons is a historical romance novel series of 8 books by New York Times bestselling author Julia Quinn. Each book follows one of the eight well-off Bridgerton children, named in alphabetical order to the great amusement of the ton, as they merrily bicker with each other and find their happily ever afters.

Optioned by Shondaland, the first book The Duke and I has been adapted into a Netflix series called Bridgerton. The highly anticipated series will premiere on December 25th, 2020.

Make sure you get started on book one asap where the heroine Daphne Bridgerton gets the series started with her love story.

Daphne runs into Anthony’s old school mate, the Duke of Hastings at a ball and is not immediately taken by his roguish charm. Not used to being rebuffed let alone gently mocked, the Duke is intrigued until he finds out Daphne is his friend’s little sister. Unperturbed, Daphne asks Simon, the Duke, to enter into a fake relationship with her. The benefit for him? Keeping the ambitious mothers of the town from throwing their daughters at him during the season. The benefit for her? Turning an overlooked young woman into a desirable lady of marriageable material.

But Daphne and Simon’s clever scheme starts to feel a little too real and lines get blurred as Daphne has to convince Simon that they should alter their deal one more time.

Each book in the series follows a different sibling as they get into romantic entanglements and eventually find the person who loves them for exactly who they are. It’s worth getting started on the rest of the books before season 1 of the show premieres as the showrunners expanded the world of The Duke and I in scope and laid the groundwork for the future romantic pairings of each sibling.

“I can’t say a whole lot about Bridgertons the show, except that its coming and it’s not rated G.” – Julia Quinn

On that note, get to reading!

If you wanna hear more about Bridgertons directly from Julia Quinn, check out the Romance at a Glance interview where we go in-depth on the series, Julia’s lifelong love of reading, and her advice for long-term relationships based on her own HEA with her husband Paul.

About Romance at a Glance:

On Romance at a Glance, Bridget and Shani read a different genre of romance novel each season and interview some of romance’s biggest authors. They crack each other up while getting into the nitty-gritty of real-life romance, relationships, and sex. Expect spontaneous singing, funny anecdotes, life lessons, naughty language, and 1000% honest reviews.