Can Improv Be Good? Yes, And Middleditch and Schwartz Proves It! 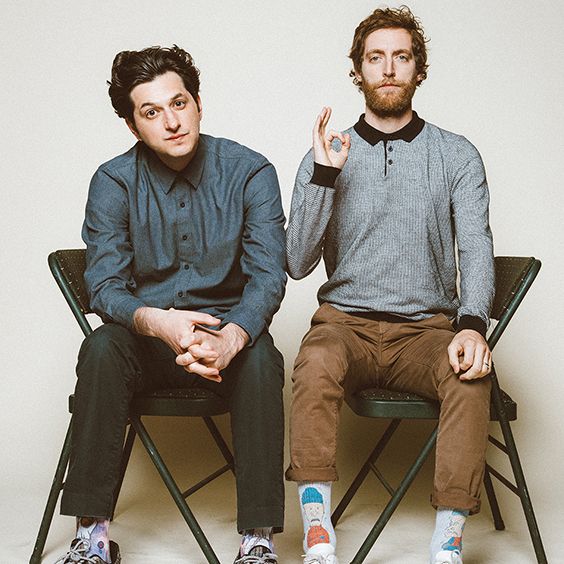 Improvisation is one of those comedy forms that is, ironically, the butt of many jokes. From Michael Scott on The Office working his way through painful sketches to tweets about the cringe people feel when they hear “Can I get a suggestion from the audience?” improvisation has somehow earned the reputation of a lowbrow, self-promotional and even painful form of comedy.

This, I must say, makes me sad. I spent three of my four years of college on our school’s improv team. We were called On The Fly, which was somewhat punny since our college sports team was The Dayton Flyers. My time on that team literally changed my life, because my husband and I had our “meet cute” at a party hosted by my improv friends.

And yeah, even though I was absolutely one of those gawky people saying, “Give me a suggestion of a famous character—NOT Harry Potter, please!” I still feel great affection for improvisation as a form of comedy. Bad improv can feel like a prison sentence in which the audience is waiting to be released from the obligation to laugh at flailing actors. It’s these uncomfortable moments that give improvisation such a terrible reputation.

But good improv? It feels like magic. An entire story is made possible before your eyes, with callbacks and witty turns of phrase and memorable characters.

Netflix’s new limited series, Middleditch and Schwartz, absolutely falls into the “good improv” category. As the title suggests, each episode stars Thomas Middleditch (Silicon Valley, Verizon Commercials) and Ben Schwartz (Parks and Recreation, Sonic The Hedgehog). The two improvisers then put on a show of about 35 to 45 minutes in length that is completely improvised based on an audience interaction.

Watching these two reminds me that there are certain principles that make good improv possible. Middleditch and Schwartz showcase these ideas in several different ways!

As a two-person team, Middleditch and Schwartz act generously toward one another time and time again. They take turns doing the most interesting characters, setting one another up for killer punchlines and callbacks. In order for the show to go on as seamlessly as possible, they need to rely on each other to keep the characters, momentum and connections going.

The prospect of a 40-ish minute long form show could be daunting or disastrous in the hands of other improvisers. But the tight teamwork of Middleditch and Schwartz makes their work a great success!

One of the greatest rules of improv is that you shouldn’t say “no,” because it will stop the scene in its tracks and hurt cooperation. But it’s not enough to say “yes.” You should always help a scene partner out by saying “Yes, and.” Adding the “and,” creates new opportunities for growth in any given scene.

Of course, “yes, and” can be incredibly redundant when spoken out loud. “Yes, and,’ is really more of a general attitude of agreeability and creative pursuit.

In my opinion there’s no greater example of this than the moment in the second episode in which Middleditch plays a character who is opening a secret door. Schwartz awaits behind the pantomimed door, obviously playing some sort of bizarre creature. Viewers can see Middleditch clearly wishing for something easier to act out…but eventually he says yes to Schwartz’s big choice and the scene cracks wide open in amazing ways!

The title says it all in a way—good improv isn’t just about telling jokes. Rather, when you are true to characters, human experiences, and human reactions, you’ll naturally stumble on a well of earned humor. Tapping into truth leads to tapping into laughter.

Middleditch and Schwartz adhere to this idea in the way they mine suggestions. Instead of a traditional short-form improv suggestion like, ‘name a place!” or “shout out a Disney villain!” the long-form improv of this show is based on a quick audience interview. The improvisers ask the audience to shout out something they’re excited or nervous about that’s coming up. Based on a response they hear, they focus in on the person who shouted it out, asking for more details and follow-up.

The result? Even if the improvisations get wacky and involve hidden closets full of aliens or a ghost wedding officiant, they’re still rooted in kernels of truth! More importantly, the entire audience is aware of that truth and already share it together. The methodology of Middleditch and Schwartz pays off in relatable and hilarious ways!

Perhaps this article is reaching some folks out there who doubt improv can really be funny. If so, I encourage you to check out Middleditch and Schwartz on Netflix! And for those of you out there who are comedy nerds, I also recommend reading Sam Wasson’s book Improv Nation: How We Made A Great American Art. It covers the origins and various forms of improv as a theatrical art over the last several decades. After checking these things out, you’ll never assume improv is automatically easy or painful ever again!

Erin Phelps is a lover of swoony romance novels, superb television and movies, and splendid comedic podcasts! In addition to writing for Frolic, Erin works at a fun customer service-oriented job at a salon. Sometimes, she can even be found teaching Women’s and Gender Studies at her local college! Her love language is well-constructed pop culture references and her favorite treat is a caramel latte.
All Posts
PrevPrevious5 Surprising Things That Our Editors Bought and Would 100% Buy Again
NextTop Contemporary Romance Picks for May (Part 2!)Next