Can’t Miss YA Thriller: Read an Exclusive Excerpt from The Ivies by Alexa Donne 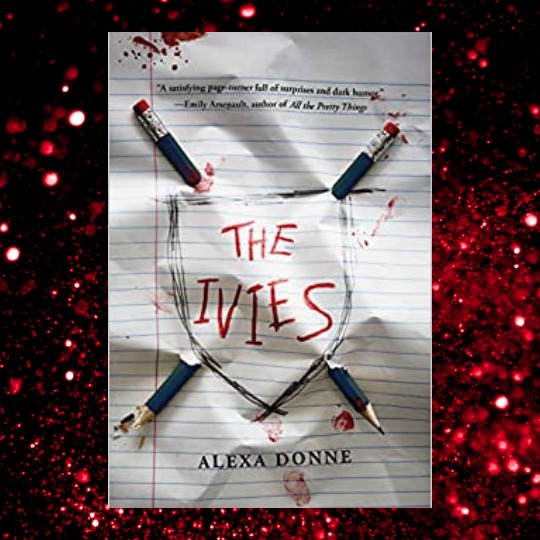 We are so excited to bring you this exclusive look at the new YA thriller The Ivies by Alexa Donne! 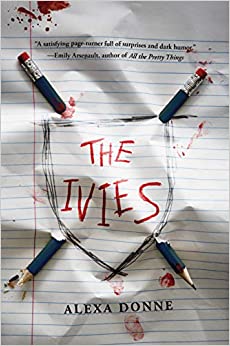 Everyone knows the Ivies: the most coveted universities in the United States. Far more important are the Ivies. The Ivies at Claflin Academy, that is. Five girls with the same mission: to get into the Ivy League by any means necessary. I would know. I’m one of them. We disrupt class ranks, club leaderships, and academic competitions…among other things. We improve our own odds by decreasing the fortunes of others. Because hyper-elite competitive college admissions is serious business. And in some cases, it’s deadly.

Alexa Donne delivers a nail-biting and timely thriller about teens who will stop at nothing to get into the college of their dreams. Too bad no one told them murder isn’t an extracurricular.

We need to get our stories straight,” Avery begins.

“Why?” I ask. The other three share a Look. No one answers my question.

“What time did you and Emma get to the party?” Margot asks, fingers poised over her phone’s screen. Pretty sure she’s started a Google Doc already.

“I think around eight-thirty?” Sierra supplies.

Margot notes the time. I note that they didn’t ask me, despite the fact that I was the one who walked with Emma to the party. At 8:15. But they’ve already moved on.

“The fight was around nine-thirty; we should double-check people’s Stories to be sure,” Avery says. She says it so casually, like it wasn’t a fist fight in which she threatened to kill the victim. I mean, Emma. “You left after that, right, Liv?”

“We stayed at the party until around eleven,” Sierra throws in. “I didn’t see Emma at the party after the fight, personally.”

“She went off with Tyler. I watched them,” Margot says, add- ing it to the timeline.

“And we were in bed by eleven-thirty,” Avery finishes. She points at Margot, who is swiping furiously at her phone, like we’re done.

“She came back to Bay at some point.” Three pairs of eyes whip around to me. I swallow hard. “Her sweater was in the room when I woke up. The red one she wore at the party. She must have come back and left again while I was asleep. It didn’t look like she got into bed. Maybe there was an after-party?”

“If there were an after-party, we’d know about it,” Avery snaps.

I do not point out that maybe Emma decided to spend the rest of her evening with people who hadn’t punched her in the face that night.

“Just don’t go spinning theories with the cops,” Avery continues. “We stick to the facts. Now, about the fight.” She’s looking right at me. “Let’s not tell them exactly what I said.”

“Wh-why?” I stammer. The looks I get back clearly indicate the other Ivies think I’m an idiot. Right, because murder threats might make Avery look bad. I shake out my shoulders, sit up straighter. “We have nothing to hide. None of us killed her, right?”

And Margot starts to cry. I’ve seen her cry on cue many times, so I can’t tell whether it’s genuine. And I feel slimy as shit that my first thought is that she’s faking it. But that’s where I am with this shady bathroom meeting and what feels like my three “friends” ganging up on me. What are they playing at?

“We tell the truth,” I say. “Because we have nothing to hide.” Avery flinches.

The lead weight of doubt settles in my stomach. The question Did Avery kill Emma because of Harvard? is feeling less and less ri- diculous. Avery is hiding something. And Sierra and Margot may be in on it.

Alexa Donne is the author of Brightly Burning and The Stars We Steal, sci-fi romance retellings of classics set in space. A graduate of Boston University, she works in TV marketing and has done pro bono college admissions mentoring since 2014. A true INFJ, in her “free” time she mentors with WriteGirl, organizes the Author Mentor Match program, and runs one of the most popular writing advice channels on YouTube. She lives in Los Angeles with two fluffy ginger cats named after characters from YA literature. Find Alexa online at alexadonne.com and @alexadonne.

Where Romance and Pop Culture Live Happily Ever After.
All Posts
PrevPreviousTen Things your Mother Forgot to Tell You About Adulting by Liz Talley
Next6 YA Enemies to Lovers Books To Read in Early 2021Next