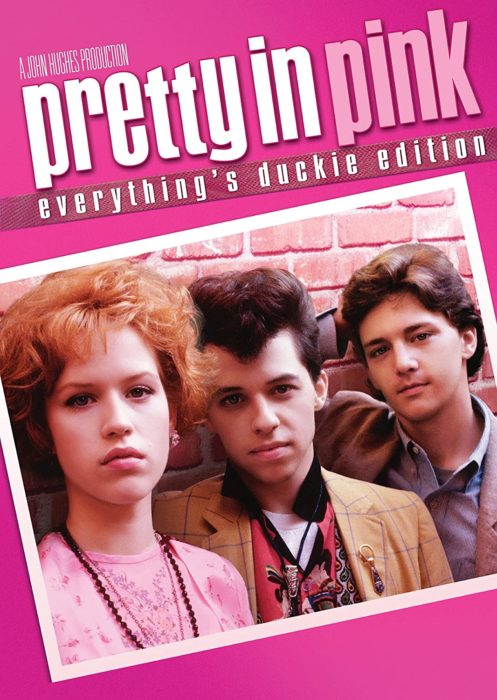 [Note from Frolic: We’re so excited to welcome author Wade Rose to the site today. He’s celebrating the 35th anniversary of Pretty in Pink. Take it away, Wade!]

Pretty in Pink was released thirty-five years ago this month, and I know exactly where I was when it came out: Weeping at the little theatre in my college town watching Andie, Duckie and Blane alongside my own BFF, Cindy.

My entire existence – like that of my bestie Cindy and Molly Ringwald’s Andie – was lived on the wrong side of the tracks. Cindy and I were kids from rural towns. I grew up a chubby, gay boy in the Missouri Ozarks who loved books more than BB guns and wearing ascots and popped collars instead of the preferred wardrobe of cowboy boots and Wrangler jeans. My school was filled with some kids who made the fellas from Deliverance seem like the Jonas Brothers.

Cindy grew up outside of Kansas City with hair as red as a barn and wide as a tornado, and a penchant for making her own clothes and wearing punk makeup. We used gallons of Dippity-Do and Aqua Net to move our hair into their own zip codes.

You get the picture. And it wasn’t a pretty one.

What was it about Pretty in Pink?

There was a pecking order in high school and college that was enforced by the popular clique: The cheerleaders, the jocks, the rich kids.

James Spader epitomized the sneering wall that kept me and Cindy on the outside always looking in.

Molly Ringwald and Jon Cryer helped break the mold of what “attractive” meant in the 1980s. Brooke Shields, Farrah Fawcett, Scott Baio, Leif Garrett and Shaun Cassidy defined the look of our childhood years, and everyone wanted to resemble them. Few could.

Cindy was picked on for being freckled and red-haired. When Molly Ringwald began to be considered beautiful, Cindy’s world began to change. When girls cried in the theatre because they wanted Andie to end up with Duckie, my life changed, too. For the funny, sensitive boy who dressed to the beat of his own drummer to be considered cool was not the norm. People looked at me differently. They treated me differently. Me being me was cool.

“Time finally caught up with us,” I remember Cindy saying. “I’m glad we never changed.”

The music caught up with us, too. Pretty in Pink’s soundtrack – Orchestral Manoeuvres in the Dark, INXS, The Pyschedelic Furs, New Order, Echo & the Bunnymen –  became the soundtrack of our lives. Even today, when I hear some of those angst-ridden songs, I pull the car over to sing along or stop the swell of emotions building inside me.

I’ve read so many opinion pieces of late that the movie has not aged well. The fact that Andie chose dull Blane over dynamic Duckie is seen as a slap in our collective faces.

But what planet are these people living on?

Certainly not mine from the 1980s.

Almost every teen girl and gay boy – given the chance – would have chosen Blane in a high school heartbeat. Was it right? No. But it represented the culmination of the dream: Cindy and I both adored Duckie, but we both wanted Blane, no matter how little we knew about him, how little he might care about us, or how little his personality appealed to us.

He was cool. He was hot. He represented the pinnacle of popularity. Mostly, he was everything we never had. I know that’s sad to admit, but it’s true.

When you don’t have acceptance, you strive for it your whole life. And that gnawing need for it never fades; it simply takes root in your soul and, over time, grows at hideous angles like a sycamore searching for light along a creek bed.

The lovely lesson about Pretty in Pink is found in the ongoing strength of the main characters: Like me and Cindy, they stay true to themselves. Over time I’ve learned (and I now teach this to writers) the easiest thing to do in this world is fit in, lose our uniqueness, bury that special voice which speaks to us. So many of our lives – from childhood to adulthood – are defined by fear, and that starts when we are young and searching for acceptance. We fear that we won’t be liked or loved, that we’ll never fit in, that we’ll never be good enough. Eventually, that fear defines us, rather than the unique gifts that make us us. We stop taking chances. We stop dreaming. We stop.

A character in my new novel, The Clover Girls, was directly inspired by Cindy, Molly and Pretty in Pink. In the book, Veronica is an unpopular, red-haired, freckled girl who goes to summer camp in the 1980s just as Molly Ringwald is becoming famous. At camp, people see Veronica differently, she meets the three girls who will become her BFFs, and her life changes. The novel is an ode to the ’80s, the friendships that define us, and staying true to oneself, much like Pretty in Pink.

A few years back, I went to a reunion with my former BFF Cindy. Both of us had found love and recognition: She had a husband, family and career as an artist. I had a husband and a career as an author. We met for a drink beforehand to catch up as well as to gather strength.

Just as we walked into the party, to see those had never seen us, we turned, looked at one another and said – just as Andie did to her father before she went to prom in her homemade dress – “I just want to let them know that they didn’t break me.”

And then we requested “Try A Little Tenderness” – a lesson we had long ago learned and vowed to pass along to future generations – and danced like Duckie.

Viola Shipman is the pen name for Wade Rouse, a popular, award-winning memoirist. Rouse chose his grandmother’s name, Viola Shipman, to honor the woman whose heirlooms and family stories inspire his writing. Rouse is the author of The Summer Cottage, as well as The Charm Bracelet and The Hope Chest which have been translated into more than a dozen languages and become international bestsellers. He lives in Saugatuck, Michigan and Palm Springs, California, and has written for People, Coastal Living, Good Housekeeping, and Taste of Home, along with other publications, and is a contributor to All Things Considered. 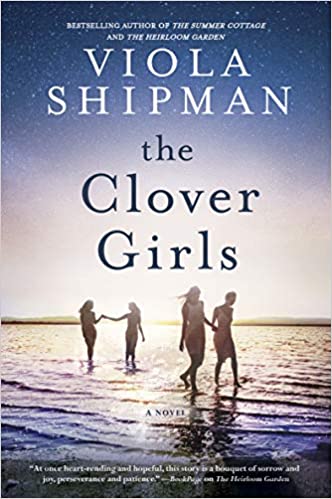 The Clover Girls by Viola Shipman, out May 18!

Elizabeth, Veronica, Rachel and Emily met at Camp Birchwood as girls in 1985, where over four summers they were the Clover Girls—inseparable for those magical few weeks of freedom—until the last summer that pulled them apart. Now approaching middle age, the women are facing challenges they never imagined as teens, struggles with their marriages, their children, their careers, and wondering who it is they see when they look in the mirror.

Then Liz, V and Rachel each receive a letter from Emily with devastating news. She implores the girls who were once her best friends to reunite at Camp Birchwood one last time, to spend a week together revisiting the dreams they’d put aside and repair the relationships they’d allowed to sour. But the women are not the same idealistic, confident girls who once ruled Camp Birchwood, and perhaps some friendships aren’t meant to last forever…

Where Romance and Pop Culture Live Happily Ever After.
All Posts
PrevPreviousBook of the Week: A Wager to Tempt the Runaway by Bronwyn Scott
NextExclusive: To Tempt A Scandalous Lord by Liana De la Rosa Cover Reveal and ExcerptNext