Comics and Chatter: A Chat with D.C. Graphic Novel Creators Shannon and Dean Hale of Diana Princess of the Amazons 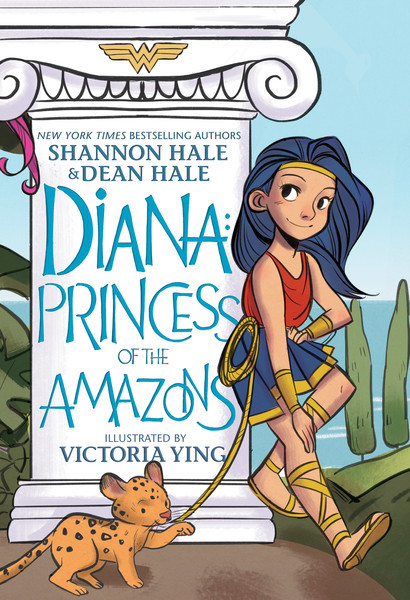 [Note from Frolic: Aurora Dominguez got the chance to chat with Shannon and Dean Hale, writers of the D.C. Comics graphic novel, Diana Princess of the Amazons. The middle grade graphic novel will be released on January 7, 2020.]

Aurora: How was it creating a middle grade series featuring super heroes?

Dean Hale: So awesome! I’ve loved comics and superheroes since I was child, and any chance to participate in that world, especially one as iconic and long-running as Wonder Woman, is an amazing experience!

Shannon Hale: We love superheroes in general and have written a bunch of hero books, but this was really special. Wonder Woman! And to get to show her as a kid! Just fun.

What inspired your story?

DH: It was really the idea of Diana being the only child on an island of immortal warriors. What would that feel like with no one to grow up with, no one anywhere near your own age? That combined with the fact that this child will one day grow up to be one of the most powerful heroes on earth felt like a great opportunity for a story.

SH: Exactly. The idea of being the only kid in the world is such an interesting storytelling question and one I knew would have fascinated me as a kid.

What can graphic novel lovers expect from the read?

DH: Graphic novels are so great at lowering the barrier of entry into a story for both big and little people. If you are a more visual learner sometimes the dense blocks of text in traditional novels can feel boring, intimidating, or both. Plus the added bonus of easy re-reading. That’s something I always love about reading comics and graphic novels. Coming back and seeing details in the art I missed and living through the story another time. I love it.

SH: Readers also get to experience the fantastic art of Victoria Ying illustrating her first graphic novel. But definitely not her last. She is a huge talent to watch out for.

If you had one super power, what would it be?

DH: Probably the ability to stop time. I would get so much done! Also I could play some really good pranks.

What is next for you in the comic and graphic novel world?

DH: Shannon and I have an eight page story in issue #750 of the Wonder Woman monthly comic that I’m excited about, and we’re also working on another DC graphic novel about Amethyst, Princess of Gemworld!

SH: As well as our ongoing early chapter book series, THE PRINCESS IN GLACK, and my graphic memoir series with illustrator LeUyen Pham, REAL FRIENDS.

New York Times best selling author Shannon Hale started writing books at age ten and never stopped, eventually earning an MFA in Creative Writing. After nineteen years of writing and dozens of rejections, she published The Goose Girl, the first in her award-winning Books of Bayern series. She has published 20+ books for young readers including the Newbery Honor winner Princess Academy and its two sequels, multiple award winner Book of a Thousand Days, the first four Ever After High books, and graphic novel memoir Real Friends. Her novels for the adult crowd include Austenland (now a major motion picture starring Keri Russell). Shannon and her husband Dean Hale have collaborated on several projects, such as Eisner-nominee Rapunzel’s Revenge; early chapter book series The Princess in Black; a novel about the unbeatable Marvel superhero, Squirrel Girl; and the first ever meeting between Ever After High and Monster High: The Legend of Shadow High. They spend non-writing hours corralling their four young children near Salt Lake City, Utah.

Aurora Dominguez is a high school English teacher, college professor and journalist in South Florida. Her work has appeared in The Miami Herald, Where Magazine and J-14 Magazine, all places where she worked as a writer and editor before going from the newsroom to the classroom. Her favorite days are "Caturdays," which she spends with a good book, her husband, Sebastian, and her cat, Luna. Her motto when it comes to reading: "No book left behind!"
All Posts
PrevPreviousDaily Frolic: Happy World Introvert Day!
NextBook of the Week: Headliners by Lucy ParkerNext