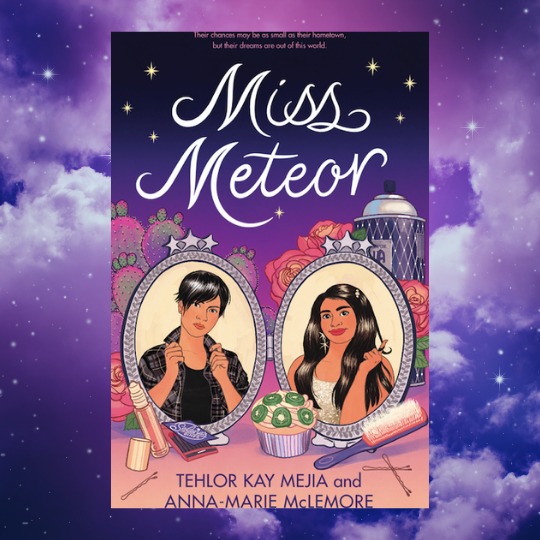 In the book world, we are constantly saturated with romance novels. This is one of the few YA books about one of the most significant relationships that define our teen years: friendship. With sprinkles of magical realism, this novel is about two Latinx teens growing up in a small touristy town where they feel like nobody understands them. Until Lita and Chicky, who are now ex-best friends, decide to put their past aside, and Chicky helps Lita enter the Miss Meteor beauty pageant. The Miss Meteor beauty pageant only has winners that meet three criteria: skinny, blonde, and straight. These two underdogs have a mission to redefine and shatter the patriarchy of beauty pageants. This heartwarming story that includes excellent pansexual and trans rep is about Lita and Chicky finding their own way and loving and embracing their beautifully complicated selves.

I am so thrilled to be interviewing two amazing Latinx authors! What brought the inspiration in coming together and co-writing Miss Meteor?

A-M: The first “we have to write this book” moment came when Tehlor and I were talking about ideas we had but that we couldn’t figure out how to turn into whole books. And as we were just kind of throwing them out there, we realized that two of them fit together, that they were two halves of one story. I had wanted to write a fun pageant book about a girl from space who wants to qualify for the Miss Universe pageant, and Tehlor…

Tehlor: Mine was about extra terrestrials!! Specifically a girl who’s mad about being called an alien (meaning immigrant) and accidentally uses brujeria to summon aliens (meaning extra terrestrials). Oh, language. Anyway, we were on a retreat in the middle of the scary Oregon woods and somehow there was enough magic there to make us want to squish them together and see what happened! (And I’m so glad we did.)

After reading your book, I was inspired to read about beauty pageants. I have never been a fan of beauty pageants because they aren’t the most inclusive competitions. I read a story by Refinery 29, stating that the Miss America competition has been around for 99 years. Only one Latinx person has won the crown. What was your research in writing Miss Meteor?

TKM: Honestly, I’m gonna toss this one over to my co-author, who has the most in-depth and inspiring research stories ever. Mostly for me I just looked at pictures of myself being surly and wearing too much eyeliner in high school and rewatched My So-Called Life.

A-M: The pageant research for Miss Meteor was both a lot of fun and hilarious. A real-life beauty queen even zipped me into some of her dresses, did spectacularly dramatic stage glamor makeup on me, and tried to get me to do the beauty queen walk, and it is way harder than it looks. I totally felt for the task in front of Lita, and in front of the Quintanilla sisters trying to prep her for the stage!

I kind of grew up wanting to be a beauty queen, just like Lita, but, like Lita, I mostly saw thin white women being crowned on TV. And it didn’t take me long to realize that that’s what most pageants, and often, the world, wanted. Being a queer kid who was still very much figuring out their gender identity just kind of made it worse, knowing how much I did not fit what these pageants told me was valuable. And in Miss Meteor, it’s not like Lita doesn’t realize the very white pageant legacy she’s going up against. She’s very aware of it. But she believes she’s got a chance. I stopped believing that as a kid. So Lita’s kind of walking out on that stage for me and my primxs and anyone like us who had those kinds of dreams too.

How was it co-writing a novel together, and what was your writing process in writing Miss Meteor?

A-M: In a recent interview we did together, I think we both had the same word come to mind: whirlwind. We thought about this story for a long time before we wrote it, but when we wrote it, we wrote it fast. We just got pulled into this world we imagined together. And that process involved a lot of throwing around weird ideas, which brings me to the advice part: make sure you’re working with someone you can share your creative weirdness with. So many of my favorite moments in Miss Meteor came from “What if we did this? What if we tried this?” conversations. To throw ideas out there and figure it out together, that’s an act of creative trust, and creative magic.

TKM: I know it sounds basic, but I always describe it as fun! Writing can be such a solitary endeavor, and creating a world can be isolating in a way lots of writers have just come to accept as part of the process. There’s something so magical about collaboration though, especially with someone you can trust with your ideas and your characters. This book came together so quickly in a lot of ways, and for me that was 100% because I just couldn’t wait to work on it! To see what A-M had come up with and play that game of creative tennis again. It’s an experience I’ll never forget.

TKM: I grew up in a small town with a huge tourist attraction, so a lot of my inspiration for Chicky’s relationship to Meteor came from personal history. Both feeling pride and embarrassment in being from this weird place, but also the constraints on expressing your identity because you’re from this tiny, insular place where everyone knows each other.

A-M: I relate to so much of this. We really went for it with both embracing the touristy feel (we even had space-themed names for a bunch of the places in town; a lot of them made it on to the page, but trust us, there were even more), while also giving space to how strange it is to claim your identity somewhere where everyone thinks they already know you.

There aren’t enough stories about friendship, and I love Lita and Chicky’s journey. What was your process in writing this friendship story?

TKM: I think a lot of YA is really focused on romance, which can be so fun and powerful to read about, but for me in high school, relationships were sort of this hypothetical thing I liked fantasizing about. What was real was my friendships. That’s where the highs and lows, the joys and heartbreaks really lived. My friendships with other girls as a teen were what really showed me what type of person I was and what type of love I wanted. I’ve always wanted to see more emphasis put on that in YA, and eventually I think A-M and I decided—why not do it ourselves?

A-M: Tehlor and I have joked that, with Miss Meteor, we ended up creating a multi-genre co-write, with the chapters Tehlor wrote from Chicky’s POV being primarily contemporary, and the chapters I wrote from Lita’s POV being pretty steeped in magic. And that’s part of what I love about their friendship. Chicky has her own down-to-earth (pun kind of intended?) reality in the town of Meteor, while also taking on faith the magic in Lita’s. Lita’s perpetually looking toward the stars, while also marveling at everyone around her on Earth, including/especially Chicky. These are two characters who have very different experiences of this planet, but who respect and embrace each other’s.

What message do you want our Frolic readers to come away with after reading Miss Meteor?

TKM: That you’re not alone. I think so many of us, as teens, feel like we’re completely alone in what we’re feeling and experiencing. And being different in any way can really heighten that feeling. I’d just like people (especially queer teens) reading this book to know that your family—whether it’s your blood family or the people you let in along the way—is out there. You’re not doing this alone.

A-M: So much of what’s at the heart of this book, this book we wrote from our queer, Latinx hearts (and that I wrote from my queer, Latinx, trans heart even if I didn’t know that last part when we drafted it), is that so often, what the world tells you is wrong with you is brilliantly, luminously beautiful.

Do you have any new and exciting projects you would like to tell our Frolic readers about?

TKM: I’m currently working on the next book in my middle grade series, Paola Santiago and the River of Tears—about a space-obsessed Latinx tween who discovers the ghosts and superstitions her mother has been embarrassing her with for years might not be as hypothetical as they seem. The first book (centered on the legend of La Llorona) is out now, and book two will follow next summer!

A-M: My next YA, THE MIRROR SEASON, which comes out next March, is about two SA survivors—a queer Latina girl, and the boy who just moved to her town—who find their fates intertwined in a season of vanishing forests and enchanted pan dulce. It’s one of the most personal books I’ve written, but it’s also one that probably has more humor than any of my previous (probably second only to Miss Meteor). When you’re a survivor, you have to find the people you can laugh with, and you have to find magic.

Anna-Marie McLemore was born in the foothills of the San Gabriel Mountains, raised in the same town as the world’s largest wisteria vine, and taught by their family to hear la llorona in the Santa Ana winds. They are the author of The Weight of Feathers, When the Moon Was Ours, Wild Beauty, Blanca & Roja, and Dark and Deepest Red.

Tehlor Kay Mejia is an Oregon native and the author of the YA novels We Set the Dark on Fire and We Unleash the Merciless Storm and the middle grade novel Paola Santiago and the River of Tears. Her short fiction has appeared in the All Out and Toil & Trouble anthologies from Harlequin Teen. You can find her on Twitter @tehlorkay.

Alexandra Someillan is a quirky cat lady who reads mostly contemporary romance and young adult. She is obsessed with teen soap operas and lives in a perpetual state of 90's nostalgia...
All Posts
PrevPreviousBook of the Week: Gentleman Jim by Mimi Matthews
NextTimeless Holiday Romance Recommendations by Dana VolneyNext