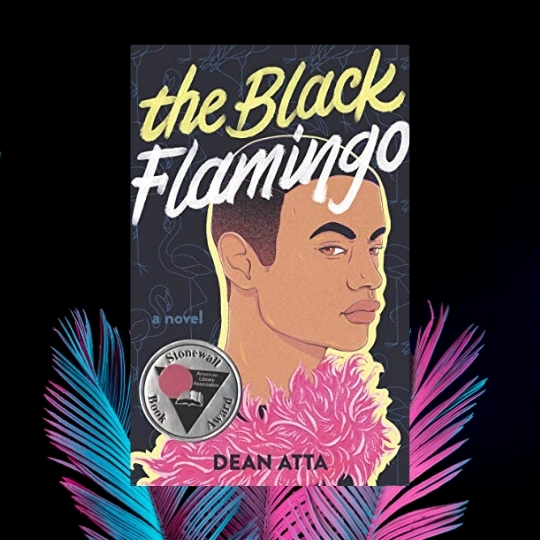 After reading The Black Flamingo, I had total bouncing hearts in my eyes. This book that is written in verse is drenched with ineffable magic, whimsy, and raw emotion. This is a coming of age story about a black queer boy coming into his own in the world of drag. Dean Atta’s book reminds us not to be scared of standing out in a world where everyone wants to blend in. The Black Flamingo is a love letter to the LGBT community and for anyone who is pressured to conform to break free and let our inner flamingo fly. Hope you enjoy my interview with the amazingly talented and Stonewall Book Award Winner Dean Atta! 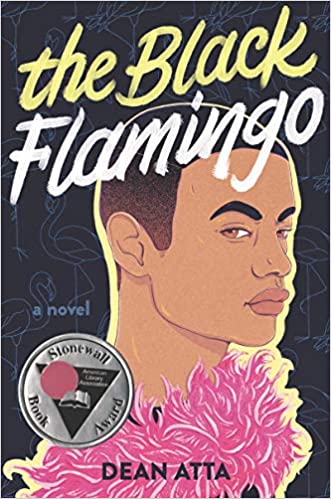 What inspired you to write The Black Flamingo?

I was visiting my grandparents in Cyprus and there was a sighting of a real black flamingo. It felt like the perfect metaphor for being black and queer. I wrote about this, and slowly the rest of the story revealed itself to me.

The Black Flamingo is officially the Stonewall Book Award winner for 2020! How does it feel to win such a prestigious award?

It’s a wonderful honour to win an award named after such an important moment in LGBT history. In world history. My hope is that this book will be read by future generations as a representation of LGBT life today.

Your book is one of the first books that I read that fluidly delves into so many different kinds of identity such as gender, sexual, cultural identity, and more! What was your writing process in exploring these identities that Michael struggles through?

My process was to allow Michael to learn and grow through his journey. This is often facilitated by conversations with his mother, uncle, grandfather, and friends. I wrote some of the key moments and conversations before knowing exactly how they worked narratively. I knew the book was going to end with Michael’s first drag performance. Then, it was about figuring out what it would take to get Michael onto that stage. It’s a drag origin story, as well as a coming of age story.

Six-year-old Michael is some of my favourite writing, as I got to see the world through innocent eyes once again. I have two young nieces, so I observed them and how they talk and see the world but mostly I thought back to being that age. As Michael got older it was a matter of expanding his vocabulary, adding nuance and layers of meaning to things that younger Michael previously took on face value. The older he gets, the more complicated the world around him appears, as well as his inner world.

I found the character of Daisy very interesting in how she was figuring out her own identity as well and constantly pushing back against it throughout the novel. What was your journey in writing this complicated character?

There was so much I wanted to explore in this book, and I couldn’t give everything to Michael. Having Daisy as his best friend was a real blessing. There is an abundance of love between them but there is also a lot of unspoken tension. Daisy felt very necessary to this story because Michael’s journey to self-acceptance goes pretty smoothly but that’s not always the case when it comes to race or sexuality in a heteronormative and white supremacist society. In some ways Daisy is fine with being an outsider but in other ways she just wants to fit in. I think many of us are actually much more like Daisy than we are like Michael.

One of my favorite parts of the book is when Michael finds his voice when he joins the Drag Society in college and combines his love of poetry and performance. What was your research in writing about performing in the world of drag?

My main research was to do drag for myself. I took a ten-week course called The Art of Drag. Every Monday evening, we learnt about different elements of drag, including character, comedy, and lip syncing. I was already confident with writing poetry, but all the rest was new to me. I used my real-life experiences from this course to help me envisage the college Drag Society.

The parts that I found so relatable is all the mixed messages that Michael would get about his own identity growing up and how lost he felt. What do you say for people to turn off the noise and find their own truth?

I think who we are changes depending on who we’re interacting with, depending on the current circumstances of our lives and how they trigger past traumas. We might change our behaviours because we’re striving towards something, and we have to act a certain way in order to achieve it.

I think our actions make us who we are. I think speaking and writing are actions. I could have all these poems and stories in my head but if I never spoke them aloud or wrote them down, you’d never know I was this poet or writer. With your actions, you show the world who you are.

Alexandra Someillan is a quirky cat lady who reads mostly contemporary romance and young adult. She is obsessed with teen soap operas and lives in a perpetual state of 90's nostalgia...
All Posts
PrevPreviousWhy I Love Romance for Embracing Tropes
NextExclusive: The Secret French Recipes Of Sophie Valroux by Samantha Vérant First LookNext