Exciting Stories for the Christmas Season, Part One! 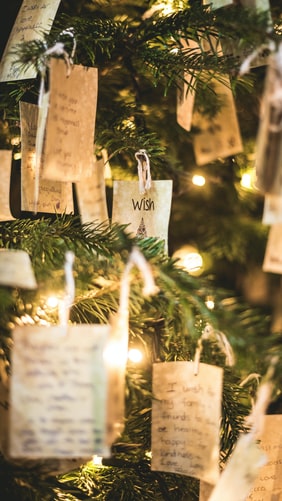 I am really excited to bring you the first set of this year’s Christmas romances that caught my eye. 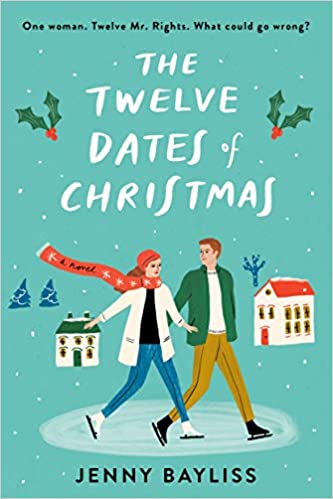 The Twelve Dates of Christmas by Jenny Bayliss

When it comes to relationships, thirty-four-year-old Kate Turner is ready to say “Bah, humbug.” The sleepy town of Blexford, England, isn’t exactly brimming with prospects, and anyway, Kate’s found fulfillment in her career as a designer and in her delicious side job baking for her old friend Matt’s neighborhood café. But then her best friend signs her up for a dating agency that promises to help singles find love before the holidays. Twenty-three days until Christmas. Twelve dates with twelve different men. The odds must finally be in her favor…right?

Yet with each new date more disastrous than the one before- — and the whole town keeping tabs on her misadventures — Kate must remind herself that sometimes love, like mistletoe, shows up where it’s least expected. And maybe, just maybe, it’s been right under her nose all along…

The Twelve Dates of Christmas was the brainchild of the Lightning Strikes dating website: twelve dates, in twelve different locations in the weeks leading up to Christmas. It wasn’t cheap, but the choice of date venues was varied, and the more Kate had read about them, the more she had to admit that it might actually be fun.

It wasn’t something she would normally have bothered with. Kate was not the kind of woman who needed a man, but equally she thought she might quite like one. Her last long-term relationship had fizzled out some time ago, and it was mostly down to laziness that she hadn’t dated much since.

She supposed she had the opportunity to meet people when she was in the city, but that would mean having to go out and socialize after work, and really she just wanted to come home and eat pie in front of the telly. And as for meeting someone new in Blexford, people generally moved here to start a family or retire. There was a distinct lack of eligible bachelors buying up property in the sleepy village.

It was Laura, Kate’s best friend, who had pushed the idea of signing up. Laura was head custodian of Blexford Manor, and the Lightning Strikes team had rented out function rooms at the manor for some of their dates. Laura had been relentless.

“It’s perfect!” she said. “You don’t need to lift a finger. You pick the activities you’d like to do and they’ll put you with someone who matches your profile.”

“It’s not really my thing,” Kate had protested. “And it’s a lot of money.”

“But once you’ve signed up, all your drinks and food are included,” said Laura. “Twelve dates! And you don’t even have to go out looking for them.”

Snowball — an aptly named bundle of feline fluff — is thankful to be spending her first Christmas in the comfort of Weber Haus, the Victorian B&B run by Miss Tilly. Emily Diemer, who cooks for the guests, dotes on Snowball, but she’s not thrilled about another new arrival at the B&B: Miss Tilly’s nephew, Lukas. Which is odd, because Snowball’s animal instincts tell her that Lukas and Emily should definitely be friends.

Everything Emily needs is in this quaint community — including, she hopes, the chance to open her own bakery one day. She doesn’t think much of Lukas for leaving his aging aunt to struggle while he jets around the world taking photographs. But now that he’s here, helping to spruce up the property and getting mixed up in Snowball’s antics, she begins to soften a little. Until she learns what he has planned.

Lukas is going to sell Weber Haus so that Miss Tilly can retire. But Snowball is certain that this B&B, and these people, are supposed to be her forever home. Somehow she has to get these stubborn humans to see things through the wisdom of a cat’s eye and a kitten’s loyal, loving heart.

The stranger paused, mouth open, then his eyes crinkled as he grinned. “I’m not asking you out.”

Oh. Disappointment dropped over her like snow falling off branches on her head. Kerfloop. Followed swiftly by embarrassment. The heat crept back up her cheeks. “Okay… What can I help you with?”

Help her? With what? She raised her eyebrows in question.

“I believe you’ve picked up a small passenger in your purse.”

“My—” Realization rushed in with all the subtlety of a blizzard, and she closed her eyes in resigned horror. “There’s a kitten in my purse. Isn’t there?”

She opened her eyes in time to catch the full impact of her stranger’s full-bodied laugh, his eyes alight with humor. “Does this happen to you often?” he asked.

“Only since this one arrived on our doorstep.” More gently than she’d been handling it until now, she swung her purse around and opened it wide. Sure enough, two blue eyes stared back at her with all the innocence of angels.

“Snowball. You’ve got to stop this,” she admonished as she lifted the small kitten out. Cuddling the ball of fluff against her chest, she lifted her gaze to her helpful stranger. Right in time to see him with a camera up to his eye. A soft click sounded as he snapped a picture.

“Uh— No, thanks.” She lifted a hand to block any more.

“I’m only getting the cat in the shot. I promise.”

Zero for two. First, he wasn’t chasing her down because he was interested, and now he only wanted pictures of the cat. My ego is going to need some chocolate therapy if this keeps up. 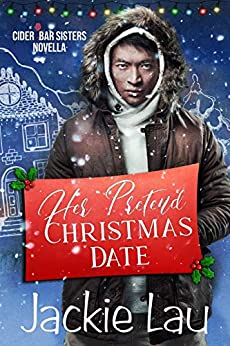 Although she’s the fun and outgoing one, Julie Tam has always lived in the shadow of her older sister, Charlotte. Now Charlotte has a good career and a great boyfriend whom their parents love, and Julie has neither of those things.

Her blind date with Tom Yeung is disastrous; however, he’s exactly the sort of guy her parents would like — a methodical, straitlaced pharmacist who even folds his underwear and wears paisley ties. So, she pretends they’re a couple to impress Mom and Dad in their phone conversations. When her mother insists that Julie bring Tom to her hometown for Christmas, Tom, who has no plans for the holidays, agrees.

But Julie doesn’t know how she’ll tolerate a whole weekend in his company, especially when they have to share a bed and participate in a gingerbread house competition together. The man is irritatingly proper and set in his ways.

Tom wanted to know all of Julie’s childhood stories. She’d thought there was a greenhouse at the North Pole… What else had she believed? What had she enjoyed?

Except he wished he could kiss his fake girlfriend.

No. Julie was all wrong for him. Hadn’t they had a miserable time on their first date? But the better he got to know her, the more he liked spending time with her, and…

“Ooh, you know what we should do?” She didn’t wait for him to answer. “We should make snow angels.”

“You haven’t made snow angels before?”

This did not appear to shock her.

She led him to the field behind the school, where she flopped down on her back in the snow and moved her arms and legs back and forth.

He kept thinking about her being underneath him again. Removing his hand from his sensible gray mitten and slipping it under her clothes. Finding the warm skin above the top of her pants…

He hissed out a breath and shut his eyes.

Two seconds later, he was on the ground.

“Did you just push me into the snow?” he asked, sputtering.

“I didn’t think you’d willingly make a snow angel, so I had to make sure you did something other than standing there, fantasizing about folding your underwear.”

“You’re thinking about my underwear. Interesting.” He looked up at the clouds in the sky, then snapped his head toward her. “Wait a second. Are we flirting?”

1 thought on “Exciting Stories for the Christmas Season, Part One!”

Keira Soleore writes for the International Examiner and Cogitations & Meditations. She enjoys connecting with readers on Twitter (@keirasoleore) and through her website (www.keirasoleore.com). Her interests include medieval manuscripts, philosophy, poetry, picture books, choir, sunshine and beaches. Keira is a pseudonym.
All Posts
PrevPreviousA Scorpio’s Book Guide for this Fall
NextFrolic Podcast of the Week “Quick & Dirty Romance” Hosts Sarah Smith and Skye McDonald Share Their Top 3 Tips for Writing Sex ScenesNext