Exclusive: A Duke Too Far by Jane Ashford Excerpt 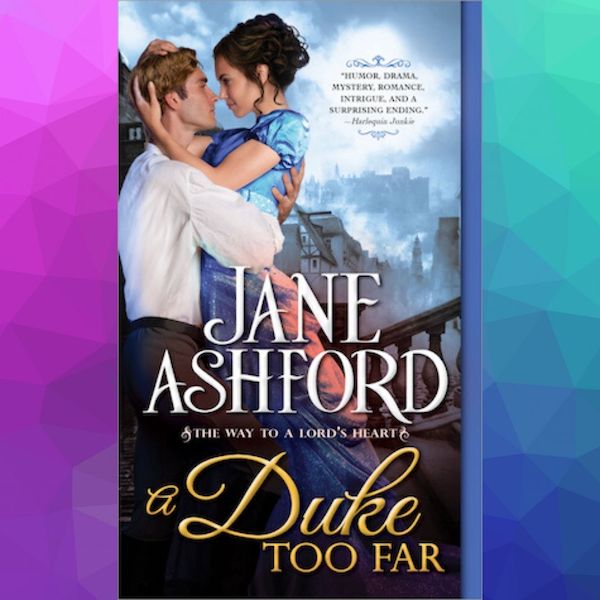 We are excited to bring you an excerpt of A Duke Too Far by Jane Ashford.

About A Duke Too Far:

Peter Rathbone, Duke of Compton, is mourning the loss of his sister Delia, but the work of keeping his family’s deteriorating estate afloat is never done. When Miss Ada Grandison, a close friend of his sister, arrives with a mysterious letter that she claims holds the secret to saving the family home, Peter is skeptical to say the least…his life is about to get even more complicated.

Ada is eager to do whatever she can to help the Rathbones. She brings clues that Delia claimed would change everything for the family and that lead Ada and Peter on a hunt to unravel the past. But they’ll have to face their painful memories — and their true feelings for each other — to discover the truth.

“Is that a bat?” asked Miss Deeping.

Naturally it was, Peter saw with a sinking feeling in the pit of his stomach, even though he’d shut every nearby door that would latch. The dining room had a stone arch and couldn’t be entirely closed off.

The scrap of black dipped and fluttered above them. Miss Deeping threw her arms over her head. Miss Finch crouched in her chair. Miss Moran loosed a small shriek.

And a small whirlwind erupted from the vicinity of Miss Ada’s feet. Her tiny dog, which had been silently well behaved up to now, went berserk. In a frenzy of barking, the little creature raced up and down the room, leaping for the bat as if its tiny legs had springs.

The bat looped lower. Miss Finch squeaked and also covered her head with her arms.

The dog jumped amazingly high for its size. Time almost seemed to slow as it hurtled into the air. The bat veered downward. The two drew closer, nearly, nearly meeting. Then the dog fell back, and the bat flew on.

Peter noticed Macklin. The earl was gazing at him with a cocked head and a half smile, almost as if he was enjoying this spectacle. Easy for him to do so. It wasn’t his house infested with flying rodents. Were bats rodents? Obviously, that didn’t matter. Whatever its species, the creature was frightening his guests and driving a pet dog mad. With a sigh, Peter bent and picked up the wooden paddle from the floor. Rising, he caught up his napkin in his other hand.

The frenzied dog raced around Peter’s feet as he stalked the bat. Peter had to take care not to trip or kick the little animal as he tracked the bat’s flight pattern. Cries from the table and Miss Julia Grandison’s stentorian exclamations didn’t help. But at last, he calculated the correct angle and administered the rap that knocked the bat from the air. Bending quickly, he scooped it up in his napkin, only just snatching it out of the tiny dog’s reach. Ella reared against his leg, front paws scrabbling, demanding the prize with a fury of barking.

Peter held the bundled bat well out of the dog’s reach. He handed the napkin off to Conway the footman, who carried it from the room. Ella followed him, still in full doggy voice, her tiny body vibrating with emotion. Murderous outrage? Territorial indignation? Defensive loyalty?

Turning, Peter found his guests looking at him with varying degrees of astonishment. Of course. He was certain they’d never seen anything like that before. He’d tried to appear conventional despite his surroundings, but now he’d established himself as the eccentric duke in the crumbling castle. A sigh escaped him. Alberdene certainly was crumbling, and he supposed he was a bit out of the ordinary. But he’d hoped to play down the latter.

Well, there was nothing to be done now except try to be charming. Surely he was capable of charm? It was difficult to say actually. He’d had almost no opportunities to gain or exercise such a skill.

He returned to his chair, setting the paddle back on the floor. Everyone’s eyes followed his movements. He straightened, smiled, drank a little wine, and summoned his wits. “Your dog doesn’t like bats,” he said to Miss Ada, and immediately deplored his choice of remark.

“I don’t think she’s ever seen one before,” the girl replied. “But apparently she does not.”

Miss Moran began to giggle. Miss Finch took a deep breath. “I was afraid it would fly into my hair,” said Miss Deeping.

“I’ve never known a bat to do that,” said Peter. “Despite the stories. In fact, they seem uncannily able to avoid it.”

“And you are an expert on bats, I suppose,” said Miss Julia Grandison dryly.

One might as well embrace one’s fate, Peter thought. What other choice was there? “I am rather. They’re…indigenous.” He blinked. Where had that word come from?

“Where has the footman taken it?” asked her niece.

“Out to the battlements. It will recover in a bit.” He didn’t want them to see him as a killer. The older woman raised her eyebrows. Now she would tell him that the bat would simply fly back inside, Peter thought. And that his efforts were futile if he did not kill them. But she didn’t speak.

“Ella is usually such a good dog,” said Miss Ada.

“The footman won’t let her out, will he?” the girl added.

“I’m sure he’ll take care not to. As should you. There are foxes and other beasts in the woods that would eat her.” Which added to the general impression he was making by suggesting that his grounds were a roaring wilderness. Peter pressed his lips together to keep any further slips from escaping.

“Unless she drove them mad with barking first,” said Miss Julia Grandison. “Really the most undisciplined animal.”

“I don’t see how I was to train her about bats,” replied her niece. “We haven’t any at home.”

And there was his situation in a nutshell, thought Peter. A cracked and moldering nutshell. His visitors would most likely flee Alberdene at the first opportunity, which was a rather melancholy thought, he found.

Jane Ashford discovered Georgette Heyer in junior high school and was captivated by the glittering world and witty language of Regency England. That delight was part of what led her to study English literature and travel widely. She’s written historical and contemporary romances, and her books have been published all over Europe as well as in the United States. Jane has been nominated for a Career Achievement Award by RT Book Reviews.

Where to Find Jane:

Keira Soleore writes for the International Examiner and Cogitations & Meditations. She enjoys connecting with readers on Twitter (@keirasoleore) and through her website (www.keirasoleore.com). Her interests include medieval manuscripts, philosophy, poetry, picture books, choir, sunshine and beaches. Keira is a pseudonym.
All Posts
PrevPreviousDaily Frolic: You’re Invited to a Virtual Party!
NextAt-Home Film Festival IdeasNext