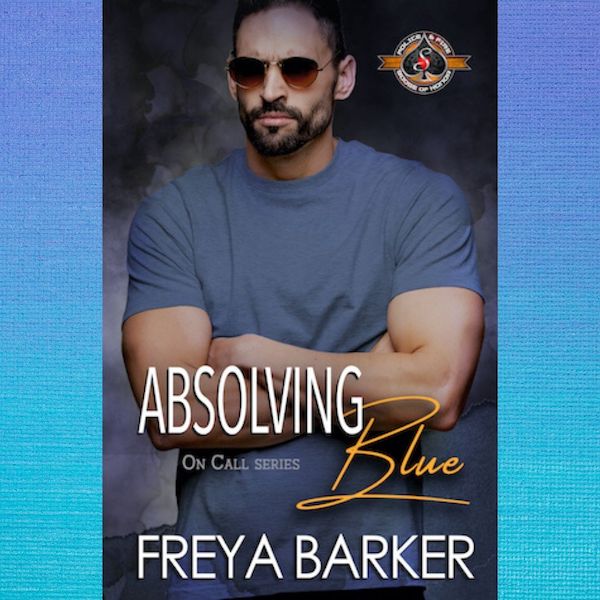 The fourth book in Freya Barker’s On Call series, Absolving Blue, is out on March 10th. A fast-paced, twisty, turn-y romantic suspense with seasoned characters, and a cute doggo, Absolving Blue is an unputdownable read. Seriously, I read it in an evening, starting at 11pm with what was supposed to be just a chapter or two. Famous last words for readers like us, Barker sucked me right in and kept me up until 4am with Blue and Tony’s story. If you’re a fan of Barker’s and you’re current with her On Call series, you’ll be happy to see old faces making an appearance in this story. If you’re new to Barker or this series, have no fear, you can jump right in right here without missing a beat.

Ava “Blue” Navarro is a bit of a loner, and that is by design. She loves her family at the Durango Fire Department, and being an EMT is her life’s passion. That passion for helping people is why it hits so hard when patients start dying on her watch. This strange coincidence draws the attention of local law enforcement, specifically the smooth-talking detective Tony Ramirez. Tony has a bit of a love ‘em and leave ‘em reputation, and in Blue’s eyes, he’s far too good looking for his own good, and for her sanity. When things get particularly rough, Tony brings Blue a calm she thought she’d never experience.

Barker crafts one hell of a story with some hair raising twists that had me on the edge of my seat more than once. She puts unexpected people in jeopardy and, honestly, doesn’t leave an easy, free, and clear path to saving them. I love stories that aren’t afraid to scare the crap out of you with bad guys that are well and truly bad, no remorse, no moral code, just pure evil. One of the things I love about seasoned characters is the communication they share. They don’t typically jump to conclusions, they say what’s on their minds, they don’t play games, and they don’t expect each other to be mind readers. That level of open communication is one of the reasons I love reading characters closer to my age, Barker delivers the goods on this front efficiently.

“I didn’t, until this afternoon.”

His eyebrows shoot up and he smiles. “No kidding?”

Gah, he’s so damn handsome. Not super tall like most of the other guys I know—maybe five ten or eleven—but he’s broad-shouldered and fit, plus he has that whole smoldering Latin look down. I haven’t seen him without a shirt but I want to bet he has the right amount of chest hair. He’s just that perfect.

There’s a reason I steer clear of guys like that: slick, smooth, and too pretty for their own good. He looks like he comes from money too, with his Hugo Boss suit and silk tie. I bet even his shoes are designer.

I realize he’s watching me ogle him top to bottom, feel myself blush at his knowing grin, and promptly start to ramble.

“I saw him when I walked into the shelter where I volunteer. I’ve always wanted a dog, but it’s hard with my twenty-four-hour shifts. He came right up to me, though, and when I saw his name, I knew I had to have him.”

“What’s his name?” Tony asks, amusement in his voice as he flips open the lid of the pizza box. Probably because unless it’s in professional capacity, I don’t think I’ve ever said this much at once in his presence. He loads both plates with two slices of pizza each.

His eyes find mine and I’m surprised to find warm understanding there. He nods, shrugs off his jacket, and removes his tie, tossing both over a kitchen chair. Next he opens the top few buttons of his shirt to expose a hint of dark chest hair, just as I’d imagined. Then he grabs the plates, moves into the living room, and sets them on the coffee table, giving Arthur a firm no when his nose gets a little too close. He sits down on my couch, grabs one of the plates and the TV remote, kicks off his shoes, and lifts his feet on the table.

I’m still standing in the same spot I was when he walked through the door and made himself at home. I don’t have people over often. Sumo’s been here a few times, watching a game or a movie, but not even the rest of my crew has sat down for a meal here. Of course, that’s because I don’t cook. Well, I do, I just don’t do it particularly well.

Still, Tony doesn’t exactly look out of place, even with his colorful socks on my coffee table.

“Arthur, down,” he orders my dog, who immediately flops on his belly next to the table where my pizza waits.

I head to the kitchen, grab two glasses and a bottle of wine from the cupboard, and bring them inside. Tony takes over and pours us a glass, while I grab the plate of pizza and sit down in the far corner, tucking my legs under me. He hands me a glass before sitting back with the remote and flicking through the channels. The pizza is loaded and smells awesome, and I shove a big bite in my mouth, my eyes on the TV where he finds a Denver news station.

“It’s good,” I mumble around my bite.

“Good.” He winks at me before turning his glance back at the screen, shoving half a slice in his mouth.

We watch the news in virtual silence while finishing off the pizza and drinking wine.

“What are you gonna do with Arthur while you work?” he asks during a commercial break, scratching behind the dog’s ears whose big head is resting on Tony’s lap.

“The million dollar question. That’s always been what held me back from getting a pet, the length of my shifts.”

“There’s a doggy daycare just south of the cemetery along the 160. It’s a little out of the way, though. I’ve seen ads for pet-sitters as well,” he suggests.

“I guess I should check those out. I’ve also thought I could check with our battalion chief, see how he feels about a dog around the firehouse.”

“Worth a try. Otherwise you can ask a neighbor,” he adds, and I immediately think of Bruce. There’s no way I want him with access to my apartment or my dog. “Or…” He throws a meaningful look my way. “…I could take care of him for you.” His eyes drop to the dog, who is staring back at him adoringly. I know how you feel, buddy.

Freya Barker inspires with her stories about ‘real’ people, perhaps less than perfect, each struggling to find their own slice of happy.

She is the author of the Cedar Tree and Portland, ME Series, the Northern Lights Collection and the Rock Point Series. She is also co-author of the SnapShot Series.

To see Freya’s complete backlist, or to find out what is coming down the pipe, visit freyabarker.com.

Donna Soluri started in the book world as Scandalicious; now, this almost empty nester is going her own way. A lover of cupcakes, champagne, old-school rap, and Harry Styles she likes to read books with characters closer to her age still romancing and kissing and causing trouble.
All Posts
PrevPreviousDaily Frolic: Rachel Lindsay Returned to the Bachelor to Combat Online Bullying
NextDaily Frolic: The New Bachelorette is 38 and We’re Here for ItNext